Summary: The river clean-up and mangrove recovery work in the Lower Lempa River Basin reflects the organisational traditions of the local communities. 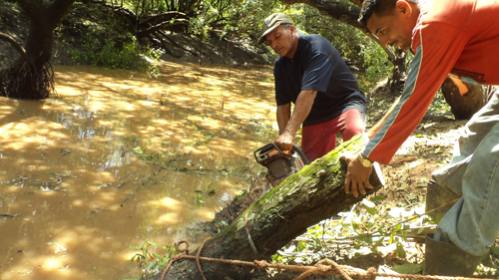 SAN NICOLÁS LEMPA, El Salvador , Oct 17 2012 (IPS) - Armed with chainsaws, machetes and shovels, local residents of El Salvador’s Lower Lempa River Basin, near the Pacific Ocean, are unblocking the flow of rivers and pruning the branches of trees on riverbanks to keep them from falling into the chocolate-colored water.

One team is working on clearing the El Espino River. Another is doing the same in El Borbollón, also located in the Lower Lempa River Basin in the department of Usulután, in southwest El Salvador.

When the water flows more freely, there is less chance of the rivers overflowing and flooding nearby crops, an increasingly frequent occurrence due to alterations in the cycle of rains and dry spells.

Several kilometres to the south, in the mangrove forests of Jiquilisco Bay, Brenda Arely Sánchez walks waist-deep in water along a channel in the Cuche de Monte swamp, which she and a small army of women have reopened with machetes in order to improve the flow of saltwater and promote the recovery of the mangrove trees.

The channel, blocked for years by roots and sediment, no longer allowed seawater to flow in during high tide. As a result, 70 hectares of mangrove trees were slowing dying, because these species need a saltwater environment to survive.

“With pure hard work, we removed all of the mud and roots from the channel in plastic containers,” said Sánchez, one of 30 women who participated in the effort.

These women and men are part of the Mangle Association, based in the Lower Lempa River Basin and Jiquilisco Bay, an area declared as the Xiriualtique Jiquilisco Biosphere Reserve in 2007 by the United Nations Educational, Scientific and Cultural Organisation (UNESCO).

The Mangle Association’s efforts range from the protection of biological diversity to risk management to reduce vulnerability to the floods that are growing more severe year after year.

The once-fertile lands of the Lower Lempa basin – a coastal plain that encompasses the largest stretch of mangroves in El Salvador – were used by large landholders for cotton plantations until the 1970s, when production declined.

When the Salvadoran civil war was ended by the peace agreements of 1992, many former combatants from the Farabundo Martí National Liberation Front (FMLN), then a guerrilla group and now the ruling political party, were given parcels of land in this area to facilitate their reintegration into civilian life.

This explains the abundance of community organisations. Local residents say that the organisational traditions developed in times of war are now being applied to social and environmental projects, primarily to confront what everyone identifies as the effects of climate change.

“In the past we knew that the rains would start in May and end in October. Now nobody knows when they will start or end, if there is going to be a drought or a storm,” Carlos Barahona, the coordinator of the river clean-up work and the opening of the channel in Cuche de Monte, told Tierramérica.*

Up until now, half of the dredging of 4.2 km of the El Espino and El Borbollón Rivers has been completed. The work began in July and was financed by the Ministry of Environment and Natural Resources after the destruction wrought by Tropical Depression 12-E in October 2011.

The storm was the most severe weather event ever recorded in El Salvador, dumping 1,513 mm of rain, the equivalent of 42 percent of the average annual rainfall during the 1971-2000 period, according to an October 2011 assessment by the Economic Commission for Latin America and the Caribbean (ECLAC).

There were 35 deaths and an estimated 900 million dollars in losses and damages. The area hardest hit was the Lower Lempa basin.

“Hurricane Mitch (1998) was bad, but this was worse. We left our houses and headed for the shelters when the water was almost up to our necks,” recalled Sánchez.

Climate change has been linked to the variations in precipitation patterns and heavier rainfalls. But flooding in this area lasts longer because the drainage channels, constructed during the cotton boom, are unable to empty out properly in the sediment-filled El Espino and El Borbollón Rivers.

Another cause of flooding is the water released from the 15 de Septiembre hydroelectric dam, located upstream on the Lempa River, when torrential rains make it necessary to open the floodgates to prevent it from collapsing.

The gates are often opened without prior warning, the local residents complain. As a result, the lower stretch of the Lempa, the country’s longest river, overflows and floods some 20 communities.

“We are always going to have floods, but now that the rivers have been cleared, the water will drain away more quickly,” stressed Barahona.
In addition, these rivers will be navigable once again, which means farmers and fisherfolk will be able to transport their products in canoes.

The opening of the channel in the Cuche de Monte swamp, stretching four kilometres, has been bearing fruit since the work began in July. The death of 70 hectares of mangrove trees has been halted; new mangrove shoots have begun sprouting, and the fish and shellfish that disappeared when the channel was blocked have returned.

Red snapper, catfish, bass and shrimps are among the species observed in the waters of the swamp, said José Manuel González, a biosphere reserve warden and Lower Lempa native.

Due to the importance of the species found here, the reserve has been protected since 2005 by the Convention on Wetlands of International Importance, signed in Ramsar, Iran in 1971.

“The project is already helping people, because everyone benefits from the recovery of the mangrove forest, and at the same time, it is providing employment for the families involved in the work,” González told Tierramérica.

The efforts are supported through the El Salvador Fund for the Americas Initiative, an agreement signed in 1993 by the governments of El Salvador and the United States to provide debt relief for the Central American country in exchange for investment in environmental projects.

The fund created for this purpose is endowed with 41.4 million dollars.

The goal in Cuche de Monte is for the ecosystem to regenerate naturally through ecological mangrove restoration (ERM). Instead of manual planting of one or more species of mangrove trees, this method involves identifying the causes of damage and subsequently working to remedy them.

ERM is taught in the area by experts from the Mangrove Action Project (MAP). “Nature knows best which mangrove species should be growing there,” said Barahona.