UNITED NATIONS, Oct 11 2012 (IPS) - The Korean Women’s Peasant Association won the 2012 Food Sovereignty Prize for its efforts on behalf of the survival of small-scale and ecologically sustainable farming in South Korea.

The announcement was made Wednesday at the fourth annual Food Sovereignty Prize ceremony in New York. In addition to its work on sustainable farming, the Korean Women’s Peasant Association(KWPA) also focuses on the consumer’s right to healthy and affordable food, decent wages and working conditions for farmers, and the right of female workers to receive the same wages as the men. 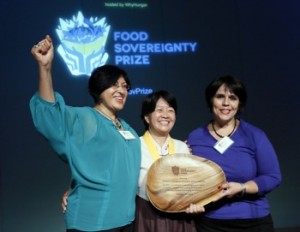 “It is a great honour. I am really pleased that our work is being recognised,” Jeomok Bak, president of KWPA told IPS at the award ceremony. “Food is closely connected to women because women feed their families and children. The right to food is linked to women’s rights,” Bak added.

Apart from the winning organisation, three other initiatives fighting for food sovereignty were honoured at the ceremony, held at the National Museum of the American Indian and hosted by WhyHunger.

One of those initiatives, the Unified Peasant Movement of Aguan Region, did not have a representative at the event. Envoys from this Honduran association of over 2,500 landless peasants, working for the right to land in a country where governmental land grabbing for biofuel plantations is commonplace, were not allowed to leave their home country.

Instead, Lucy Paguada from Honduras Solidarity NYC, originally a Honduran citizen and now a U.S. resident, held a speech on behalf of her Honduran friends.

“We want to name those responsible for our social tragedy,” she said. “First, the United States government, for financing and training the Honduran police and army.”

Paguada went on to criticise leading politicians and landowners in Honduras, calling them “puppets of the U.S.”. She also expressed her anger at the assassination of Antonio Trejo Cabrera on September 22. The Honduran human rights lawyer, who defend the peasants movement, was gunned down after leaving a wedding south of the Honduran capital Tegucigalpa.

“He had previously denounced his killers on television,” Paguada said.

The two other initiatives being honored, National Fisheries Solidarity Movement from Sri Lanka and Coalition of Immokalee Workers from the state of Florida in the United States, were able to send representatives to the awards.

Lucas Benitez from the Coalition of Immokalee Workers told the audience about his movement’s struggle to improve working conditions at tomato farms in Florida. “90 percent of the tomatoes consumed in the U.S. in winter comes from Florida,” he explained. “This industry… is one of the richest and most powerful in this country.”

Despite the industry’s profits, in the past tomato pickers working in extreme heat were not provided with shade. Female employees who were sexually harassed had nowhere to go to report assaults. Working extremely long hours was standard, according to Benitez.

But the struggles of the CIW have helped to bring about a new code of conduct for the tomato industry in Florida. “Last week, we signed an agreement with Chipotle,” Benitez announced with pride, his voice strong.

The restaurant chain Chipotle Mexican Grill is a major purchaser of tomatoes in the United States and has now committed to buying the vegetables at a fair price.

Still, many fast food conglomerates and supermarkets still refuse to pay respectable prices for tomatoes, Benitez stated, and so the CIW’s work must continue. “We will not stop until we feel that we are treated with the respect that all human beings are being entitled to.”

Olivier De Schutter, United Nations Special Rapporteur on the Right to Food, was a special guest at the Food Sovereignty Prize ceremony. He delivered a passionate speech about the meaning of food sovereignty.

The definition of the term is “the right of people to define their own food policy”, De Schutter said. The basic idea is that needs of those who produce, distribute and consume food – not the demands of markets and corporations – shall determine food policies.

“About 15 percent of the food being produced is traded across borders. It is not much,” De Schutter continued. “Yet that segment of the food system is determining all the rest to a large extent.”

“In many developing countries I see that investment goes to export agricultural products, not to the small farmers trying to feed their families. And look at how agricultural research and development is being financed. For whom? For the export market. For the large producers.”

The Belgian-born De Schutter also lashed out at his native Europe. “The European Union uses 614 million hectares (of land) annually to feed itself… 50 percent of this land that is used to satisfy the needs of the E.U. is land that is outside the Union, land in developing countries,” he said.

“Food does not go where the need is, it goes where the money is today.”

De Schutter also linked food sovereignty to climate change. “It is exactly because of climate change that we must deconcentrate food production, so that all regions are able to produce as much as they can for themselves. That is how resilience can be built.”

The event ended with a highly applauded performance by musician and activist Tom Morello, an original member of the bands Rage Against the Machine and Audioslave, who also had a few concluding words: “Some people choose between Rolls Royce and Lamborghini. Others choose between which dumpster they are going to get their food from tonight. That is a crime.”