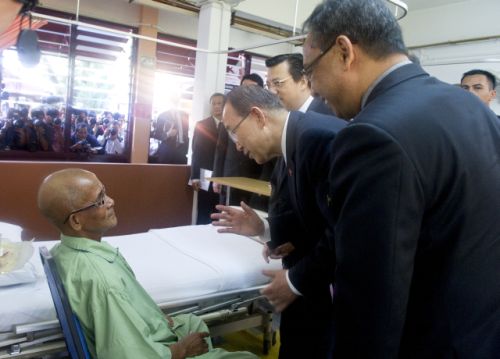 WASHINGTON, Oct 17 2012 (IPS) - The next several years could see either the elimination of tuberculosis in some regions or millions of otherwise preventable deaths, according to new research released in Washington Wednesday by the World health Organisation (WHO).

The outcome, experts are warning, rests on a three-billion-dollar gap in funding needed to fully address TB next year as well to ensure the proper introduction of new drugs.

“On the one hand we have existing as well as new tools on the horizon which could make a significant difference and even support dreams of elimination (of TB) in some regions,” Dr. Mario Raviglione, director of the WHO’S Stop TB Department, told journalists Wednesday.

“On the other hand, we are at the risk of stagnation if additional resources are not urgently mobilised by the governments of affected countries and the international community.”

Yet experts are optimistic that new drugs, if properly introduced, could see the elimination of TB within their lifetimes. New or re-purposed TB drugs, as well as new regimens to treat drug-sensitive or drug-resistant TB, are advancing in clinical trials and regulatory reviews, according to the report.

“We expect two if not three entirely new compounds that kill the TB virus very effectively to be available in the next few months,” Dr. Raviglione said.

These are the first new TB drugs in nearly a half-century, and the first drugs designed specifically for the treatment of the lung disease.

Out of the 8.7 million new cases of TB in 2011, close to a million were multi-drug resistant (MDR) TB. Only one in five MDR-TB cases are being properly diagnosed and reported, meaning most of the infected population is spreading the disease unknowingly.

Drug-resistant TB results from patients not being treated properly for regular TB.

“These two new drugs have not been used against TB before, so we are not likely to have resistance against them – and they look very promising,” Dr. Anthony Fauci of the National Institutes of Health (NIH) said Wednesday.

If these new drugs are introduced into TB treatment regimes correctly, experts say there is a chance they will start the end of the disease. Yet the gap in funding is putting this goal and millions of lives at risk.

“People can either pay now or pay more later,” warned Dr. Kenneth Castro of the U.S. Centers for Disease Control and Prevention.

Added Raviglione, “History teaches that in the fight against TB, a job not done is a fatal mistake. Efforts have paid off and saved millions of lives.”

These critical funds are needed to properly introduce these new drugs, ensuring that they are used to treat MDR-TB cases and are properly administered. The funding issue is compounded by the fact that the countries with the highest TB rates are often the least developed countries.

Based on past trends of TB funding, at least one billion dollars every year of the three-billion-dollar gap needs to come from the international community.

Africa has 10 of the 22 countries hardest hit by TB. Across the continent, the disease is also the primary cause of death for persons infected with HIV; globally, there are 1.1 million people afflicted with both TB and HIV.

“In Africa, the funding gaps are biggest relative to the need. There is probably a gap of half a billion dollars a year for just TB and another half for TB-HIV related treatment,” Katherine Floyd, coordinator of TB Monitoring and Evaluation at the WHO, said Wednesday.

In order to close this funding gap, Dr. Elizabeth Fox at USAID, the U.S.’s foreign aid arm, emphasises the importance of working with national TB programmes.

“Since 1998, USAID has put 1.6 billion dollars into this programme, and USAID will continue to be a strong supporter of the TB programme,” Dr. Fox said.

Efforts such as these have paid off, the WHO report suggests. In the past 17 years, 51 million people have been cured of TB and an estimated 20 million lives were saved.

“Without that treatment, 20 million people would have died,” said Raviglione. “This milestone reflects the commitment of governments to transform the fight against TB.”

Despite such commitments and successes, the global response is still falling short, a deficit that could lead to millions of additional deaths in coming years.

“I am completely optimistic that we can produce the drugs we need to fight tuberculosis. The question is, are we going to do it?” Dr. Fauci asked. “In my opinion, not addressing this is just not an option. I think we as a global society have a moral obligation to address this problem.”