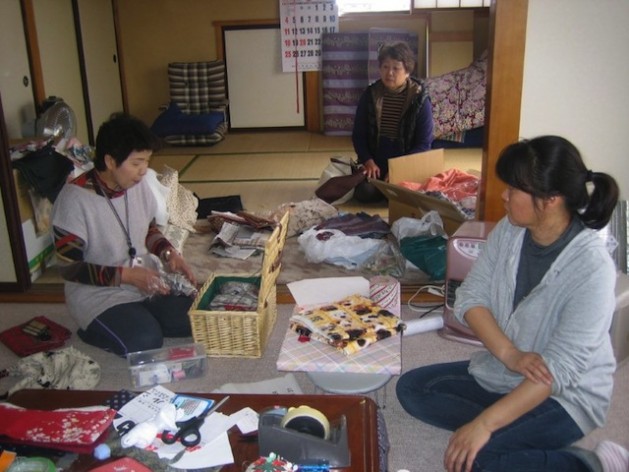 Keiko Shoji (left) started sewing classes for women affected by the Great Eastern Quake after the reconstruction of her own home. Credit: Suvendrini Kakuchi/IPS

“The first lesson is that we survived the horrible tragedy simply because we were prepared for disaster,” he explained to a group of international development officials who visited the area on Wednesday on the sidelines of the 2012 International Monetary Fund (IMF)-World Bank (WB) Annual Meetings here.

“The other is the important challenge we face today,” he pointed out. ”We are committed now to be even better prepared for the next disaster by learning from what we missed out on that fateful day.”

Kawamura shared his insights from the rooftop of the now abandoned school, where a rescue helicopter had landed as he instructed a team of teachers to protect the lives of his trapped students after the 10-metre tsunami destroyed the rest of the building.

The experience of communities like Kawamura’s illustrates the need to mainstream disaster risk management, called DRM, into the development agenda under a plan by the Japanese government and the World Bank in Sendai.

The officials’ visit to Sendai was part of the ‘Sendai Dialogue’, where delegates from leading aid and financial organisations, national and local government officials, the private sector and civil society, gathered for two days to discuss ways to strengthen international commitment to mitigate the impact of disasters around the world.

The dialogue also highlighted the focus on disaster risk management and prevention of this year’s IMF-WB meetings.

“We learned many lessons following the disaster through reflecting on the role of a city government in regards to disaster preparation,” Sendai Mayor Emiko Okuyama said in her opening remarks at the dialogue. “Based on a policy of disaster mitigation, we are undertaking a comprehensive approach including the implementation of multiple safeguards and the development of a new environmental policy including energy measures.”

Sendai City, a city of 1.6 million people and the gateway to the north-east of Japan, lost 891 people in the Great East Japan Earthquake. Though by no means a small number, that was a casualty count reduced in no insignificant way by strict quake-resistant building codes in Japan.

Indeed, stories of quake survivors vouch for the need to build resilience at the official, regional and community levels.

Kawamura explained that Arahama, a large flat farm area dotted with 1,600 households just 15 kilometres out of Sendai, had one of the most active disaster preparedness programmes. This was why none of the students died in the school, he added.

In the aftermath of the earthquake and tsunami, the children did not panic because rescue drills had been held regularly in the school, one that had also stocked relief supplies. In fact, just a few days before the March 2011 disaster, Kawamura had decided to take the relief goods kept in the gymnasium on the ground floor to higher areas – and this prevented them from being lost in the tsunami.

Data has shown that when the tsunami struck, the school, which had been built as an earthquake evacuation site, held strong as did most buildings across Japan. But what had not been foreseen was the unprecedented height of the tsunami, which reached up to almost 15 metres and swept through the tall pine trees that had been planted on the coastline as a breaker.

Says Norizami Ootobu, who heads a massive debris cleaning programme in Ido, directed under the Sendai city government: “We now realise that it is impossible to be hundred percent secure against a disaster. The best way to deal with the crisis is to put in the prevention steps that will minimise the impact.”

Concrete evidence of the benefits of being better prepared for disaster, in the form of research-based risk assessments, were presented in Sendai by disaster and financial experts.

Disasters are by no means the concern only of poor or developing countries, but they often suffer more damage when these occur. World Bank research has shown that developing countries will be hit heavily by disasters from climate change and vast urban growth. Economic losses have been estimated at one-third of official development assistance, and that 1. 2 trillion dollars have been lost in disasters.

Equally sobering was the statistic that the official budgets for disasters provide for spending less than four percent on prevention. Most of such resources are extended to emergency or reconstruction.

Rachel Kyte, vice president for sustainable development at the World Bank, explained that there has been growing evidence that “greener and inclusive growth with investment in disaster risk management (should be) to be part of global development agendas.”

But officials from emerging economies said this is tough for many developing country governments.

“Electoral issues are the current demands of the people. The dilemma for governments is current priorities versus future disasters,” he explained.

Sendai’s experience also showed that resilience to disasters did not always mean heavy spending, and can be achieved through community and private sector collaboration.

In fact, the private sector’s role has been significant in Sendai’s post-disaster rehabilitation through the provision of loans for affected businesses and the reconstruction of houses.

Smaller businesses too have contributed solutions not only by providing recovery funds, but by becoming potent players in disaster prevention and preparedness and in the process helping ease the burden on public funds.

Take the case of Takeshi Niinami, chief executive officer of Lawson, a trillion-yen business comprised of convenience stores across Japan.

After the Great Quake, Lawson sprang into action in the Tohoku area by providing food for the tens of thousands who sought refuge in evacuation centres. Eighteen months later, Niinami told TerraViva, the company remains involved by supporting the education for children who have lost homes or family members.

Said Niinami: “Global business today is being able to work closely with the community, which is what I realised through my work in disaster relief. Unless we work to protect the community, business cannot prosper.”