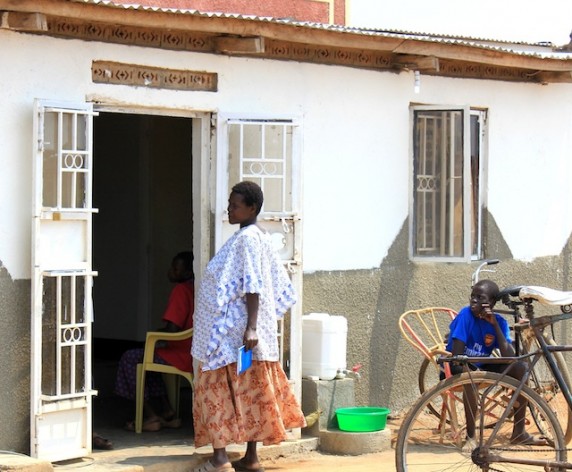 Less than one-third of Ugandan women use any form of birth control, according to the country’s 2011 Demographic and Health Survey. Credit: Andrew Green/IPS

Nov 14 2012 (IPS) - Every day at least five women are brought to the gynaecological ward of Uganda’s Mulago National Referral Hospital in Kampala for treatment for complications caused by crude attempts to terminate their pregnancies.

According to Dr. Charles Kiggundu, the head of the hospital’s gynaecological department, some of the women who come here drink gasoline or take untested combinations of herbs and drugs to induce an abortion. Others insert sticks into their vaginas.

The women at the Mulago National Referral Hospital are a small percentage of the estimated 150,000 women who suffer complications from unsafe abortions each year in this landlocked East African nation, where 1,200 women die annually from unsafe abortion attempts, accounting for a quarter of all maternal deaths in the country.

Here a “failure of knowledge about contraceptives” is driving up the rate of unsafe abortions, especially among young women, Kiggundu told IPS.

Less than one-third of Ugandan women use any form of birth control, according to the country’s 2011 Demographic and Health Survey.

A number of the women treated by Kiggundu are unmarried students, many of whom have been abandoned by their partners, he said.

According to The State of World Population 2012 report titled “By Choice, Not by Chance; Family Planning, Human Rights and Development” published on Wednesday Nov. 14 by the United Nations Population Fund, unsafe abortions represent almost half of all abortions globally. According to the report, nearly all unsafe abortions take place in developing countries, with the greatest number occurring in sub-Saharan Africa.

The most recent data found that adolescents and youth account for approximately 40 percent of unsafe abortions worldwide.

Moses Mulumba, the executive director of the Centre for Health, Human Rights and Development (CEHURD), said the issue of unsafe abortions was a growing concern among young people in the country.

“The majority of people who are affected are high school and university students,” he told IPS. “There’s no question about it. It’s a problem of the youth.”

But some of the unsafe abortion attempts could have been avoided had women been more aware of efforts to expand legal access to the procedure. There is still a widespread perception that all abortions are illegal in the country, according to Elisa Slattery, director of the Centre for Reproductive Rights’ Africa division.

In 2006 the Ministry of Health legalised abortion in cases of serious risk to the life or mental health of the mother, severe foetal abnormalities, health issues like cervical cancer or HIV/AIDS, or when the pregnancy is the result of rape or incest.

Greater knowledge about the law’s interpretation could reduce unsafe abortion rates, not just by allowing access to women who legally qualify, but by reducing the stigma around the issue, Slattery told IPS.

Policy guidelines released this year by the government affirmed all women are entitled to post-abortion care – even if the abortion was illegal. But Mulumba said that officials have not done enough to explain to women when they are entitled to a safe abortion.

“Historically people (consider) abortion to be a bad practice,” Mulumba said. “Many people don’t want to talk about it.”

That includes doctors and other health care providers, he said, who could offer the service if they felt morally comfortable doing so.

Kiggundu explained that some health care professionals were reluctant to conduct abortions because of the stigma that surrounds the procedure. Most doctors are either not well informed about the country’s abortion policy or are averse to performing the procedure, and are unlikely to recommend it even in cases where it is necessary, he said.

Reducing the number of unsafe abortion attempts in Uganda would require overcoming that stigma and educating both women and doctors about the current legislation, Slattery said.

“We have to empower healthcare providers, within the legal and policy frameworks,” she said.

Easing the stigma will not only facilitate access to abortions for women who qualify, but it will also encourage more women who are considering an abortion to consult a professional first, said Joy Asasira, a programme assistant at CEHURD.

“It’s not to say that if she wants one, it’s her right, so let her do it,” Asasira told IPS. But by “letting information flow,” she said, women would be more likely to talk to a health worker first and learn the risks of unsafe abortions.

That will not solve the problem of the high number of unsafe abortions attempted by young, poor and undereducated women who have difficulty accessing medical services, Slattery said. There will still be women who want to terminate a pregnancy, but who do not qualify for a legal abortion and are unable to afford a safe, illegal one.

Asasira said one answer was better access to family planning and contraception.

“(People are) becoming sexually active at a younger age and this is exacerbated by the fact that there is a high unmet need for contraception, while information about reproductive health services is lacking…  If training in family planning and how to use these services is done, we will definitely bring down the incidence of unsafe abortions,” she said.

Asasira said the mounting number of deaths forced policymakers to re-evaluate the issue. The new guidelines from the ministry of health have made post-abortion care an integral part of sexual and reproductive health services. This includes both emergency services and counselling for women on how to prevent unwanted pregnancies.

She said hopefully this opening would spur government health workers to push information more systematically – about contraception, but also about where women who qualify can access safe, legal abortions.

“Sometimes the duty of the government is to give the people what they need, even if (the government) doesn’t agree,” she said.