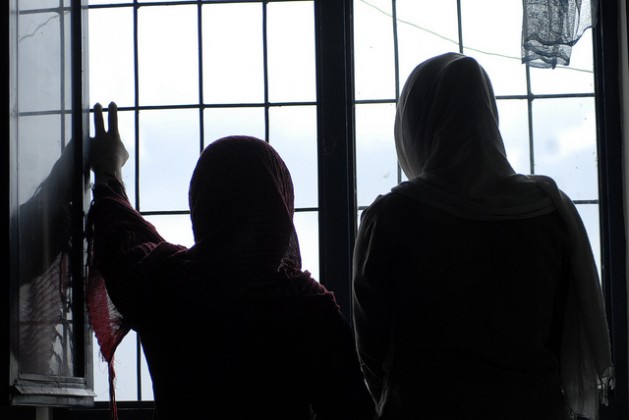 Afghan women are determined that their gains from the past 20 years will not be lost. Credit: Najibullah Musafer/Killid

UNITED NATIONS, Nov 24 2012 (IPS) - Violence against women is internationally recognised as a threat to democracy, a burden on national economies, and a serious human rights violation.

Yet in Afghanistan today, 87 percent of women face physical, sexual or psychological violence or are forced into marriage, according to recent data from Human Rights Watch.

“Afghan women have a very rich track record which is never acknowledged, never published, never spoken about,” Sharmista Dasbarwa of UNDP told IPS. It is time to talk about “the resilience, the silent courage of the village women of Afghanistan who have gone through hell for so many years and (still) dream and hope for a better and peaceful Afghanistan.”

Dasbarwa spoke to IPS correspondent Julia Kallas about the struggle to secure gender equality in the war-torn country, and why it is indispensable to lasting peace. Excerpts from the interview follow.

Q: Advancing women’s empowerment is an essential priority for the transition in Afghanistan, as it contributes directly to stability. How can women play a bigger role?

A: Although Afghanistan has got about 27 percent of women in the parliament, there are still some very deep biases against women. They want to achieve what every woman in the world wants, which is to have access to opportunities, education, training, political participation, economic activities. It is very difficult for an Afghan woman to achieve this.

Having said that, at the same time, the resilience and the character of Afghan women is very big. I feel that the establishment of the Ministry of Women’s Affairs in 2002, and the activities that they are doing in influencing different legal instruments to insure a better integration of women in the field, is very important.

At the moment, women are very eager to play an active role in the transition. Things are improving with the High Peace Council and different structures that the government of Afghanistan has established. There is a considerable scope to involve women in a very active way.

Q: How can you ensure that compromises made in the ongoing peace-building process do not lead to a rollback of women’s rights?

A: There is no official peace agreement in Afghanistan like there was in Sudan or Timor Leste. I wish I could answer your question in a very positive way, but the situation at the moment is very unstable.

Although there is a lot of political representation of Afghan women, nobody knows what will be their role during the transition and the peace-building process. So it is very difficult to say if there will be compromises. I hope not, but there is a possibility.

But Afghan women have developed a kind of determination, resilience and hope to ensure that if there are any compromises, their gains from the past 20 years are not lost and no compromises will be made in order to step them down to second-class citizens again.

At work I deal with women from the villages, from the rural communities, from the academic institutions, from the members of parliament, from the ministries. And they all have displayed a lot of determination which is a very rare thing. I worked in a number of countries and I have not seen this kind of resilience anywhere in the world.

Q: How does the new gender equality project focus on preventing violence against women in Afghanistan?

A: We are providing support for the elimination of violence in three different ways.

Firstly, to provide policy support to the legal department of the Ministry of Women’s affairs by ensuring that any legislation drafted which has a direct impact on the life of Afghan women is reviewed by the Legal Department of Women’s Affairs, passed through the government and translated into action.

Secondly, we aim to install more legal help centres. In the first phase we established 24 legal help centers in four provinces. The purpose of the legal help centres is to reach women living in rural areas who do not have access to the formal justice system and police authorities, and to ensure that they have free legal advice and protection.

Thirdly is the advocacy campaign, which we have been doing involving different stakeholders and media. It will involve round table television discussions and debates. The focus will be to raise awareness on women’s rights and their access to legal protection.

The 2009 law on elimination of violence against women has got a commission established in national and subnational level. We propose in the next phase of the project to provide technical support to the commission so that this law becomes more active. A report from 2011 showed that the number of cases registered was 2,999 and the number of cases prosecuted was only 27 percent, so we want to improve the enforcement of the law.

Q: On Sunday, we celebrate the International Day for the Elimination of Violence against Women. What are the lessons that other countries can learn from the women’s programme in Afghanistan?

A: The level and depth of violence that Afghanistan women face is something very rare in other countries. Yes, there is violence in other parts of the world but I have not come across this kind of sustained nature of violence and weakness in the voices of women to come out and seek help.

I have worked in a number of countries in Africa, and I come from India, but I have not seen this kind of helplessness, powerlessness, and lack of voice. But this is one side of the picture.

Despite having this weak position, Afghan women are very determined. The lesson that women from all over the world should learn from our programmes is that the very small support and incentive that we are doing have changed the quality of life of these women.

Our programme needs to be replicated in other countries, especially countries emerging from conflict. Afghan women are also fighting to ensure that when peace happens and peace-building negotiations are over, there is sustainable peace right down at the grassroots level.