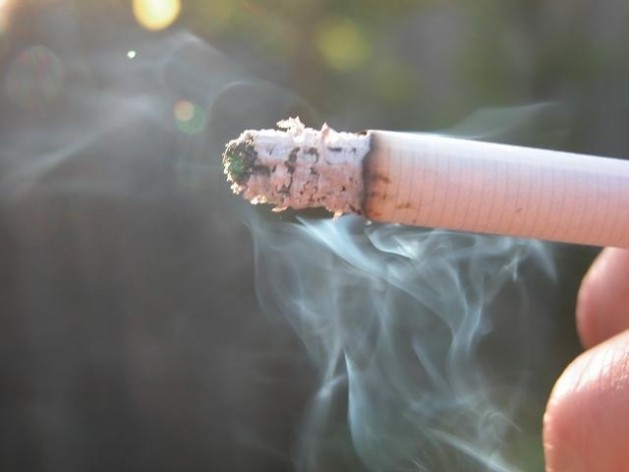 A recent World Health Organisation (WHO) survey revealed that poor people in India were twice as likely to smoke as the rich. Credit: K. S. Harikrishnan/IPS

THIRUVANANTHAPURAM, India , Nov 30 2012 (IPS) - Mujeeb Rahuman (39), a mason in the Venjaramoodu village in Thiruvananthapuram, the southernmost district in India’s coastal Kerala state, has been a chain smoker for the past twenty years.

Rahuman told IPS he spends “about 1,500 rupees (27 dollars) per month on cigarettes”, representing a large chunk out of his modest monthly income of 8,000 rupees (144 dollars). “I use them as a way to pass the time.”

But this habit is not as leisurely as it sounds. In fact, Rahuman embodies a growing addiction to tobacco among the poor in India, who are now developing higher rates of cancer and experiencing increased mortality rates.

A recent World Health Organisation (WHO) survey revealed that poor people in India were twice as likely to smoke as the rich.

According to the Planning Commission of India, as many as 354 million people – or 29 percent of the population – currently live below the poverty line, which is defined by a monthly income of anything below 672 rupees (roughly 12 dollars) for rural India and 859 rupees (about 15 dollars) for urban labourers.

The WHO survey, entitled ‘Socioeconomic Inequality in Smoking in Low-Income and Middle-Income Countries’, reported that over a quarter of the country’s population of 1.2 billion people is addicted to tobacco, a habit influenced to a great extent by income.

For instance, the survey found that 46.7 percent of men in lower socioeconomic strata are smokers, compared to 21.8 percent of rich men.

Only 7.6 percent of Indian women smoke, but here, too, the discrepancy is stark: women in lower socioeconomic strata are four times more likely to smoke than their more affluent counterparts – 12.4 percent of women from a lower income bracket have taken up the habit, as opposed to just 3.1 percent of wealthy women.

This disparity does not merely represent a difference in lifestyle choices – it highlights the stress of poverty that leads to addiction and points to a growing health gap between the rich and poor in India.

The survey was initiated in response to reports that poorer people actually faced a greater risk of dying from smoking than more affluent people.

According to the WHO, the ‘smoking divide’ also deepens the gulf of income inequality, since the poor divert their limited wages away from housing, better food or healthcare towards the purchase of tobacco products.

The Mumbai-based Advocacy Forum for Tobacco Control listed various forms of tobacco products popular with the Indian masses including beedis, which account for 34 percent of tobacco products in the country; chuttas and cheroots, small rolls of tobacco leaves; Dhumtis, conical cigarettes created by rolling tobacco leaf in the leaf of another plant; and cigars.

Data from the National Sample Survey Office of India, under the ministry of statistics and programme implementation, shows that the price of beedis makes them a much more popular option – the cost of smoking cigarettes is 399 rupees (about seven dollars) per month, while beedi consumption costs as little as 93 rupees (close to two dollars), according to the Global Adult Tobacco Survey (GATS) for 2009-10.

In fact, 37 percent of rural households and 20 percent of urban households consume beedis, compared to just 3.7 and 9.6 percent respectively for cigarettes.

And meanwhile, the health impacts of tobacco consumption are growing increasingly more severe.

“Tobacco chewing has resulted in a huge (medical) burden of oral cancer and oral precancerous conditions,” the book said.

Dr. R. Jayakrishnan, assistant professor at the community oncology division of the Regional Cancer Centre in Thiruvananthapuram, told IPS the leading cause of oral cancer was tobacco-related chewing, adding that most patients visiting the centre hail from low-income households.

“Today, 80 percent of lung cancer cases appear to be a result of smoking. The need of the hour is to develop prevention strategies that specifically focus on poor people,” he told IPS.

M. A. Oommen, a prominent Indian economist, told the media in Thiruvananthapuram recently, “While linking a high incidence of smoking with poverty is a simplistic correlation, the issue has to be tackled in a multi-pronged manner, such as giving incentives to the poor to get out of the habit, moral persuasion, a higher excise duty on tobacco products and structural reforms through better employment opportunities.”

A 2012 Asian Development Bank study predicted that increasing cigarette prices, by imposing higher taxes on manufacturers, would save more than 27 million lives in five Asian countries including India.