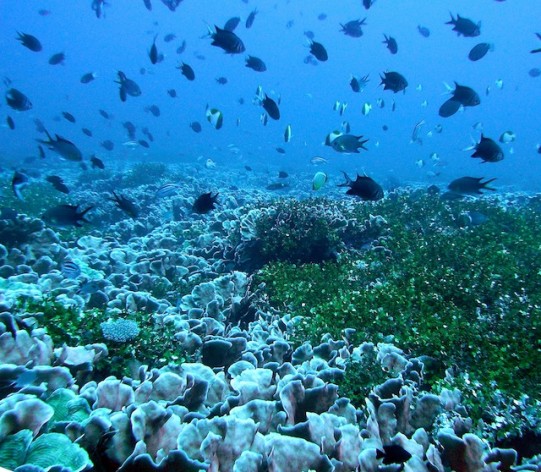 SYDNEY, Dec 17 2012 (IPS) - The world’s first deep sea mineral (DSM) mining venture in the Bismarck Sea off the northern coast of Papua New Guinea in the southwest Pacific has come to a halt after two years of development.

While the mining company is embroiled in a disagreement over project funding, unprecedented opposition by politicians, academics and local communities has focussed on the unknown environmental and social impacts of this untried mineral extraction process.

Deep sea mining, considered the new resource frontier, has been the subject of debate since the 1960s. But financial and technological constraints have hindered the viability of ventures.

Now, the gradual depletion of land-based mineral resources, a rise in demand for metals by growing economies in Asia and rapid technological advances have generated new interest in deep sea mining.

Attention has been focussed on hydrothermal vents in the ocean’s floor at depths of more than 1,000 metres, in volcanic regions where geothermal activity in the earth’s crust has created sulphide deposits containing silver, gold, copper, manganese, cobalt and zinc.

Many Pacific island states, which have small land areas, have expressed interest in exploiting their ocean resources for economic development.  Fiji, for instance, has a total land area of just 18,376 square kilometres and 114,460 square kilometres of territorial waters.

Last year the PNG Government issued a mining lease to the Canadian company Nautilus Minerals, for a period of 20 years.  The inaugural Solwara 1 Project is located 30 kilometres from the New Ireland coast in the Bismarck Sea with an extraction area of 0.11 square kilometres at a depth of 1,600 metres.  Mining, predicted to produce 275 million dollars in gold and 783 million dollars in copper, was due to begin in 2013.

However, given that Melanesia has a very high rate of biodiversity, the scientific community here is deeply concerned about inadequate understanding about the impact of deep sea mining on marine life.

“It will take a long time to address all of the uncertainties in terms of our knowledge of the deep sea environment,” Chalapan Kaluwin, professor of environmental science at the University of Papua New Guinea, told IPS.  “Another 10 to 15 years of marine research really needs to be done so that we better understand the deep marine ecosystem before we embark on deep sea mining.”

The unique marine life supported by hydrothermal vents, such as tube worms, clams and crabs, was only discovered in the 1970s.  Scientists believe that the Manus Basin in the Bismarck Sea could contain more than 40,000 hydrothermal vents.

A spokesperson for Nautilus Minerals in Australia claimed, “Seafloor production offers many advantages over typical land-based operations with higher grades (of minerals) compared to (those on) land, a small extraction footprint with reusable production infrastructure…no blasting and relatively little removal of unwanted material covering the sought after deposits.”

Company literature states that DSM mining operations will have “no direct impacts to communities, fisheries or reefs”, but acknowledges some seafloor habitats would be disrupted; plume generation – which occurs as a result of water disturbance, such as when tailings are pumped back into the deep sea – could occur; and noise and vibrations are likely.

Australian oceanographer, Dr. John Luick, who reviewed the company’s Environmental Impact Statement, claims that key information about sea currents, tides and the toxicity of seabed plumes is absent, thus leaving many questions unanswered about the likelihood of pollutants being conveyed out of the deep sea and into marine food chains or within the range of coastal communities in New Ireland.

“We don’t understand enough about the potential impacts of this deep sea mining project on marine biodiversity, fisheries and coral reefs, as well as people and communities,” Kaluwin agreed.

The International Seabed Authority (ISA) and the Applied Geoscience and Technology Division of the Secretariat of the Pacific Community (SOPAC) concluded last year, “The current level of knowledge and understanding of deep sea ecology does not make it possible to issue any conclusive risk assessment of the effects of large-scale commercial seabed mining.”

Furthermore, many Pacific Island states are yet to establish appropriate DSM legislation and regulatory bodies.

“PNG does not yet have all of its maritime boundaries established,” Kaluwin said. “The government does not yet have appropriate off-shore or deep sea mining policies and legislation in place.  We also need to address the traditional rights of landowners and communities over the marine environment.”

SOPAC is currently working with the EU on the Deep Sea Minerals Project to develop regional and national capabilities to manage and monitor seabed development. This year the project launched the Regional Legislative and Regulatory Framework for Deep Sea Minerals Exploration and Exploitation to guide Pacific Island nations in developing new laws.

On Oct. 23 the government received a petition, signed by 24,000 people in PNG, declaring opposition to the Solwara 1 project.

In early November, Nautilus Minerals, which believes the government has a contractual obligation to pay approximately 75 million dollars associated with a 30 percent investment in the project, announced it was terminating construction of the 407 million-dollar seafloor production system.

“The state disputes this interpretation and Nautilus cannot continue to (exclusively) fund the build of the Solwara 1 equipment,” Nautilus told IPS.

Dr. Helen Rosenbaum, coordinator of the Australia-based Deep Sea Mining Campaign, commented that there was now an opportunity for the government, company and civil society to seriously address the outstanding legal, environmental and social issues.

She believes that “no deep sea mineral mining project should occur in the region until it has been proved that it will not have any detrimental impact on the environment or local communities”.