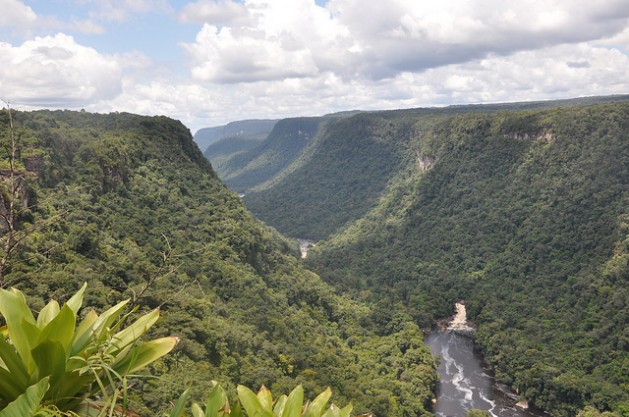 ROSEAU, Dominica, Dec 26 2012 (IPS) - Imagine Guyana and Dominica without forests and rivers, or Antigua, Barbados and St. Lucia without beaches.

Atherton Martin, a conservationist and former minister of agriculture in Dominica, says climate change should be forcing Caribbean countries to take a hard look at how they are managing their natural resources, lest they eventually disappear.

“What the climate change principles tell us is that basically when your natural resource systems are debilitated, weakened or destroyed by climate change, your economy is thereby destroyed,” he told IPS.

But all is not bleak. Martin believes climate change could potentially benefit the Caribbean in two ways – firstly, by forcing a change in mindset where countries take the lead instead of simply reacting; and secondly, by allowing governments to build stronger economies by accessing millions of dollars in climate change funding.

He pointed to Guyana’s push to become a low carbon economy, noting that it has already drawn down more than 70 million dollars from carbon credits on just 10 percent of its forest systems.

“They expect to draw down a total of over 250 million dollars over the next year and this is a deal made on carbon credits and sequestration valuation with just one country, Norway,” Martin said.

At the launch, then President Bharrat Jagdeo called for a platform on which developing countries like Guyana are not seen as mere recipients of aid, but as equal partners in the search for climate solutions.

A low carbon economy is one where economic activities are geared to reduce the amount of carbon dioxide that would otherwise go into the atmosphere, and where other activities and lifestyles seek to minimise the effects of climate change.

About 80 percent of Guyana’s forests, or some 15 million hectares, has remained untouched over time. An expert study commissioned by Guyana estimates that the country would earn some 580 million dollars annually if it were to engage in economic activities that could lead to the destruction of the forests, but the economic value to the world, if these same forests were left standing, would be equivalent to 40 billion dollars.

Jagdeo has described Guyana’s forests as a global asset, home to at least 8,000 plant and animal species that make it one of the most biodiverse areas in the world. The forests also act as a sink to absorb carbon dioxide, one of the greenhouse gases that contribute to global warming.

With the right low-deforestation economic incentives, Guyana would avoid emissions of 1.5 gigatonnes of CO2 a year.

Earlier this year, the Inter-American Development Bank (IDB) approved an institutional strengthening project for Guyana’s Low-Carbon Development Strategy. The approval means that nearly six million dollars will flow to Guyana for implementation, following an initial sum of 1.06 million dollars released to the country from Norway for preparatory work.

The project will strengthen the technical and administrative capacity of those institutions responsible for implanting the strategy, and develop an MRV (Monitoring, Reporting and Verification) system on a national level.

The partnership between Norway and Guyana is the second-biggest REDD+ partnership in the world, according to the Guyanese government.

Martin pointed out that there are arrangements with the World Bank, the Organisation of American States (OAS), other financial institutions and the United Nations that could allow Caribbean countries to earn financing as a result of their climate change resilience activities.

President and founder of the Dominica-based Waitkbuli Ecological Foundation, Bernard Wiltshire, an attorney, agrees that a new way of thinking is necessary.

He told IPS that Caribbean countries now need to build “appropriate industries” and get involved in “the right kind of tourism”, for example.

“Dominica could have a tourism industry that could far outstrip Antigua. Antigua has the sun, sand and sea and so on, but Dominica has the sea and in addition to that it has a lot more than Antigua,” Wiltshire said.

“These things are growing. Just slouching, drinking rum under a palm tree – that is going out of fashion. The tourism industry in the Caribbean is going downhill because we are competing with the larger countries. Tourists are going farther afield, they want more adventurous things,” Wilshire added.

He pointed to Southeast Asia and the jungles of Burma as new hotspots, adding that “Dominica has its own Caribbean jungle right here” and could attract thousands of people who are looking for a jungle adventure.

Martin lamented that a region like the Caribbean, with so many extraordinary opportunities, has such financially strapped economies.

“You have countries with national annual budgets of 600 million dollars. If you can draw down in a year or two years half of that or even more from converting the silent work of your natural systems into hard dollars from the international financial community, you are home free,” he told IPS.

He said that the Caribbean could very rapidly turn itself around purely on the basis of taking that climate-resilient look at its natural systems by understanding how vulnerable it is and hence how vital it is to reorganise the way in which it manages its natural resources.

“That’s a no-brainer and climate change is just begging the question. It’s saying to us, ‘hey guys, you have an option, and guess what, for once this option is to the advantage of small islands like ours’,” he added.