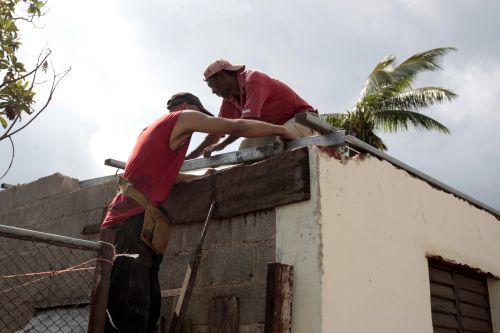 HAVANA, Dec 28 2012 (IPS) - “Adaptation to climate change is urgent and must be part of development,” said Bárbara Pesce-Monteiro, the United Nations resident coordinator in Cuba, assessing the damage done by hurricane Sandy in the eastern region of the country.

She said the damage was very serious, especially in Santiago de Cuba, a city of almost half a million people and a services hub for other towns. In order to support the country at such a difficult time, the United Nations system in Cuba designed an action plan that will serve as a framework for assistance from the international community.

The plan, to be put into effect over the next six to 18 months, will benefit three million people in the most affected provinces: Santiago de Cuba, Holguín and Guantánamo. The main areas of concern are early recovery, housing, water and sanitation, health and education.

Sandy, regarded as the most devastating hurricane to strike the eastern part of the island in the last 50 years, claimed 11 lives in late October and caused considerable losses in housing, educational and health facilities, agriculture and food crops, as well as major interruptions in electricity and water supply, now largely overcome.

The action plan entails seeking 30.6 million dollars to deal with the urgent needs of the population that suffered the brunt of the hurricane’s impacts, along with a strategy aimed at improving living conditions for those affected.

The authorities immediately embarked on recovery work, “but the international community wants to support the country in this task,” Pesce-Monteiro said in an interview with IPS. She explained that this humanitarian aid did not require a specific request from Cuba, as it is part of the regular U.N. mechanisms.

The devastation caused by Sandy in the early hours of Oct. 25 recalled the danger from earthquakes to which the eastern region, especially Santiago de Cuba, is exposed. “It’s an issue we have been talking over with the government for several months now,” said Pesce-Monteiro.

She said this concern is shared throughout the Caribbean region. “After the earthquake in Haiti in January 2010, we realised we were all vulnerable. In fact, the United Nations has supported and will continue to support earthquake detection centres in eastern Cuba. This vulnerability needs to be taken into account during reconstruction efforts,” she said.

The United Nations Development Programme (UNDP) has helped strengthen the capacity of local governments to reduce disaster risks in several provinces. Sixty-three risk management centres have been created at the municipal and provincial levels, as well as 209 early warning stations in the most vulnerable communities.

Pesce-Monteiro said these installations “have produced excellent results.” The United Nations is working with the other Caribbean nations to share the experiences, test their usefulness and see how they can be adapted to other countries in the region.

“There is also cooperation with the Environment Agency (under the Cuban Ministry of Science, Technology and Environment) in their studies on vulnerability” and other topics, she said.

The U.N. resident coordinator in Cuba was emphatic when she said that adaptation to climate change is an urgent need.

“The United Nations has been saying for years that there is no time to waste. Adaptation must be part of development,” she said.

In her view, this issue should be a seamless part of every country’s development model, whether the country is rich or poor. “All development plans must take vulnerabilities into account, in order to ensure adaptation. Ideally, they would also limit emissions (of greenhouse gases),” she said.

Pesce-Monteiro also said that it is one thing to be able to face and respond to a disaster, but quite another to build a sustainable society that is capable of preparing for and adapting to climate phenomena.

“In this field, too, Cuba has experience that can be of value to other nations,” she said.

Pesce-Monteiro was sure that the trail of disaster left throughout the Caribbean, as well as in the United States and Canada, in the wake of Sandy, has provided experiences worth assimilating. “But here we are still in the phase of responding to the damage; we want to process the lessons learned in January, and I know the Cuban state will do the same,” she said.

She added that this reflection should go far beyond Cuba itself. “Climate change is affecting all of us, so we hope that this will be another opportunity to raise awareness in all sectors about an issue that must be addressed seriously at the global level,” she said.

“We have already experienced a succession of extreme events of a very serious nature close to home, which compels us to reflect deeply and analyse the type of development we want for the future,” Pesce-Monteiro said.

“I think society is crying out for us to make the appropriate commitments so that we can move forward,” she said.

She highlighted the importance of the social forum held in June during the United Nations Conference on Sustainable Development (Rio+20) in Rio de Janeiro.

“It was a broad, participative forum, with strong citizen commitment. Governments are going to have to feel pressure from each one of us, and to understand that we really want a sustainable planet,” she said.