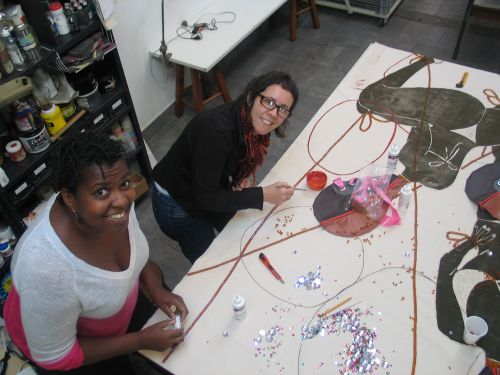 Creating art at the ACE Project, a residency for visiting artists in Argentina. Courtesy of ACE Project

BUENOS AIRES, Dec 21 2012 (IPS) - Artists-in-residence, once found only in the industrialised North, can now be found throughout Latin America, which is hosting artists from different parts of the world to produce and exhibit their work. There are also opportunities for visiting artists simply to seek inspiration.

In the region, initiatives to provide accommodation and work space for artists from a wide range of disciplines are diverse, but they have a common characteristic: their funding is a work-in-progress, improvised as a one-off to fit each specific project.

The Iberoamerican Residency Network – “residencias_en_red” – was created in 2008 thanks to an initial donation from the Spanish Agency for International Development Cooperation (AECID). At present it comprises 27 spaces for contemporary art and culture research, production and exhibition in Argentina, Bolivia, Brazil, Chile, Colombia, Ecuador, Mexico, Nicaragua, Paraguay, Peru, Uruguay and Venezuela.

In the case of Brazil, the first to host an artist-in-residence was Capacete, an independent residency and art programme in Rio de Janeiro. But there are also residencies in Sao Paulo to the south, Belo Horizonte in the eastern state of Minas Gerais, and Itaparica in the northeastern state of Bahia. In Colombia they exist in Bogotá, Medellín and Cali. Mexico has a residency at Casa Vecina, and Bolivia at the Kiosco Gallery.

There are other spaces that are not part of the network, but do form part of the general opportunities available to artists for spending a creative period of time away from their everyday environment, renewing their ideas, finishing a project or making contacts for future productions.

The network coordinator, Kadija de Paula of Brazil, told IPS that in 1998 there were only three spaces, but in the following 10 years the number of residencies rose to 20.

“On the basis of facts, figures and anecdotal information that I have collected during the time I have worked with the network, I attribute this surge to four main factors,” de Paula said. “First, the need to create non-institutional spaces for art.”

Travel facilities are another, and so are “the increasing interest of international investors in residencies” and “the growing general interest in Latin America, due to shifts in global economic power,” she said, referring to the economic progress made in the region, and especially Brazil.

In Argentina, one of the most active organisations is the ACE Project, an independent, not-for-profit residency offering space for production, exploration and urban interventions by artists.

Based in a middle-class neighbourhood in Buenos Aires, it offers workshops run by experts. There is also an isolated space to work in seclusion, called “The Tower”, and other rooms for lectures or exhibitions.

“We can host 33 artists a year,” Alicia Candiani, the curator and director of ACE, told IPS. The project was created in the late 1990s and began to offer space for residencies in 2003.

The interview with Candiani was held in the centre’s Salón Políglota (Polyglot Room), decorated by Columbian-Canadian artist César Forero during his stay there this year. Transparent, lightweight materials are suspended from the ceiling, bearing inscriptions and drawings that are continued on the floor.

Artists from different parts of the world, and from other provinces in the country, come to the residency. The foundation is not-for-profit and does not receive state funding, but the idea is that the artists should not have to pay for their expenses.

“We subsidise one project at a time. It’s like embroidery: the funding proposal for each project is no good for the next. We are always starting from scratch. And some initiatives do not get off the ground because we cannot manage to find funding,” she said.

The first step is for the artist to send in a proposal. “If it is interesting and can be done here, it is approved. Then we start looking for funds. Depending on where the artist is from, we apply in his or her country of origin; sometimes there are existing agreements,” she said.

Candiani, who has a long artistic career to her credit, said that before she joined ACE she did not know anything about fundraising, but she had to become an expert because it was the only way to carry out the proposals and provide the artists with somewhere to live and work.

Residencies at ACE last three weeks. At other centres they may be shorter or longer; however, the current trend in Latin America is for a maximum stay of two to three months, she said.

Candiani noted that the system of residencies was not a recent phenomenon. They began in the 16th century when the Academy of Art in Rome offered its Grand Prize for artists to work there for two years.

Over time, more residencies opened up in Europe, the United States, Canada, and since the late 20th century, Latin America. “Globalisation and increased opportunities for communication and dissemination caused the explosive growth in this phenomenon,” Candiani said.

A very different style of residency is offered by the Centro Rural de Arte (Rural Centre for Art) in Argentina, which describes itself as a “nomadic and temporary” space without a fixed base, at least for the time being, actress María José Trucco, one of its coordinators, told IPS.

What is unique about this organisation, created in 2008, is that it provides group experiences, includes the full range of the arts, and is convened in different Argentine locations in succession – always in rural areas – by agreement with local organisations.

“We want the artist to work on a theme, proposed by ourselves, in relation to that geographical area, because we think that the environment supplies information which the artist can use to produce new meanings,” Trucco said.

During the residencies, which last from 15 days to a month and are held up to twice a year, the centre has worked in conjunction with the National Institute of Agricultural Technology (INTA) and the National Parks Administration (APN), as well as local governments.

“The call for proposals is national and international. People have come from Canada, Belgium, Finland, South Korea, France, Peru, Brazil, Colombia and Chile,” she said. “Each residency takes a year’s work to prepare.”

Trucco said “every project requires its own fundraising effort.” Sometimes they obtain full funding, and at other times only half the amount. In the latter case the artists have to find a way of raising the rest.

Candiani said some countries host up to 500 artists, but that is because they have state subsidies, funding for the arts or private trust funds. This is not the case in Latin America – or at least, not yet.