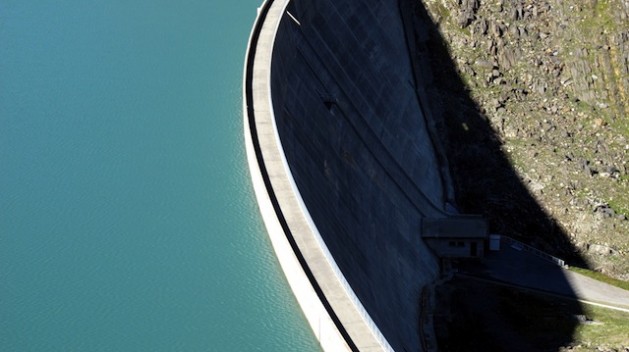 MEIRINGEN, Dec 8 2012 (IPS) - Swiss energy companies are determined to turn the country into a ‘battery for Europe’. Vast investments are made in big-scale water power projects. But it is not certain they will eventually pay off.

With the decision for a nuclear shutdown, the spotlight in Switzerland and Germany has switched to renewable energy sources. In Germany there’s a massive boost to solar and wind energy production, while Switzerland’s energy companies focus on increasing their storage capacities in the Alps.

About 11 percent of Europe’s electricity flows through Switzerland. The Swiss electricity industry stresses the advantages of the country’s central location in Europe and its topography. On the European energy map, Swiss mountain lakes could function as a huge battery for unsteadily generated renewable energy, and generate high revenues.

Natural and artificial mountain lakes are an essential component of Switzerland’s energy supply. Water power makes up 57 percent of the country’s electricity production. Some of these lakes aren’t just natural water reservoirs though, but serve as basins for pumped-storage hydro power plants (PSPs).

The system is simple and has long been a good business. Throughout the day, cheap, spare electricity is bought on the market and then used to pump water from a lower reservoir to a basin further up the mountain. At times when demand for electricity is high, stored water is released and drives turbines that produce electricity, which can then be sold on the market for a higher price.

Currently, 11 such plants are running in Switzerland with a combined 1400 megawatt capacity. Three other projects are under construction, to increase Swiss pumped-storage capacity to 3500 megawatts by 2017. Two more PSPs are being planned: ‘Grimsel 3’ at the Grimsel Pass in the Bernese Alps and ‘Lago Bianco’ at the Bernina Pass in Grisons.

“The symbiosis between nature and technology has defined the character of this landscape,” writes the Grimsel region’s tourism agency. Ernst Baumberger, press officer at the regional energy company KWO looks at Grimsel through two lenses: while praising the region’s beauty, Baumberger points out that a plenty of precipitation, glaciation, rock as building ground and the immense altitude difference make it ideal for water power use. KWO put its first power plant at Grimsel in operation 80 years ago.

The company recently was licenced to implement its 1.2 billion Swiss francs project ‘KWOplus’, including the construction of a second PSP (‘Grimsel 3’). The plant will have a 660 megawatt capacity, which is about the power of an average Swiss nuclear plant. The plan is controversial, both politically and economically.

“Switzerland doesn’t need any additional PSPs. There’s neither a lack of batteries, nor a grid stability problem,” argues Jürg Buri, managing director of the Swiss Energy Foundation (SES). He says that no country operates as many flexible power stations as Switzerland.

There’s nothing green about pumped-storage hydroelectricity anyway. “If today’s PSPs were supplied with clean energy, that business would be unprofitable,” Buri says. “The revenues of the peak current wouldn’t make up for the purchase price and the energy lost for pumping.”

According to the licence, KWO is obliged to run Grimsel 3 with as much renewable energy as “economically and technically possible.” No fixed share was defined however. KWO’s Baumberger stresses that in the long term, the company’s PSPs should run solely with green electricity. “However, the primary criteria will remain the profitability,” he adds.

While the energy company praises Grimsel 3 as an important contribution to the security of energy supply for the country, Jürg Buri claims that the pumped-storage business further strains transmission lines. “In fact, to run Grimsel 3, even more lines would have to be built, something which people often forget about.”

KWO is currently busy preparing the necessary building applications. In a next step, the management board will discuss the profitability prospects and decide on the investments. “Concerning Grimsel 3, the shareholders are a bit cautious,” KWO’s spokesperson says. “They fear that with the current electricity prices, the investments may not pay off.”

The Swiss Association for Water Management (SWV) views investments in PSPs as risky and their profitability as volatile. At the Bernische Kraftwerke (BKW), which holds half of KWO’s shares and manages electricity trade, the media officer declines to comment on the prospects of pumped-storage hydroelectricity. It’s no secret though that Swiss energy companies are deeply concerned by the volatile electricity price and the declining price difference between peak and off-peak current.

That difference is essential for the PSP business model, which relies on providing expensive peak current, especially at noon time. Nowadays, subsidised wind and solar energy from other European states are conquering that market, challenging and flattening the prices of peak current and thereby reducing the profit rates of PSP-based energy providers.

SES’s Jürg Buri is sure that Switzerland’s ‘battery boost’ will soon come to an end. “Neither Lago Bianco, nor Grimsel 3 will be built. The economic risks are too high.” He stresses that both projects primarily target the European market. “Don’t forget that besides decreasing electricity trade revenues, Swiss PSPs are further challenged by the increasing number of flexible power plants in Europe.”

Ernst Baumberger explains that his company has different options to move on with Grimsel 3. “If the situation on the electricity market worsens, we may split the building of Grimsel 3 in various stages. At each stage, market developments could be analysed before moving on with construction.”

In contrast to environmental organisations, KWO’s Baumberger remains optimistic. He stresses that in the light of booming wind and solar energy in Europe, the demand for further storage capacities will grow. “What Switzerland so far offers in terms of energy storage is nothing but a drop in the ocean.”

While opinions on the future of Swiss pumped-storage hydroelectricity differ sharply, one thing seems sure: the industry’s prospects lie in the hands of European, not Swiss politicians and businessmen.