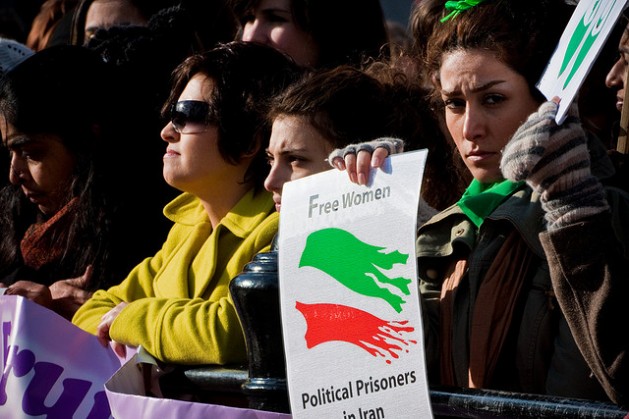 Presidential elections in Iran have historically been used by reformists to push for a more open political environment. Credit: Garry Knight/cc by 2.0

TEHRAN, Jan 30 2013 (IPS) - With the June 2013 presidential election drawing closer, Iran’s reformists are debating what they should do in the face of the severe restrictions to which their leaders and political parties have been subject since the popular protests that roiled the country after the last election four years ago.

While some reformists have insisted they will boycott the election, others are arguing that it could offer a new opportunity for political organising regardless of whether the Guardian Council, the body that vets potential candidates, will permit their well-known political leaders to run.

Still others say much depends on how the competition among their conservative rivals shakes out in the coming months. Since no conservative or hard-line candidate has yet stepped forward to announce his official candidacy, they argue it is too soon to decide what position to take and that the political environment could yet change in unexpected ways before the election.

Presidential elections in Iran have historically been used by reformists both to push for a more open political environment and to demonstrate their ability to mobilise popular support, particularly among the urban middle classes.

This year, however, reformists appear more ambivalent, especially given the continuing house arrests of their 2009 presidential candidates, Mir Hossein Mussavi and Mehdi Karrubi, and the imprisonment of other key reformist leaders, including former deputy interior minister Mostafa Tajzadeh and the former chair of the Parliament’s National Security and Foreign Relations Committee, Mohsen Mirdamadi.

Their release – as well as those of other political prisoners – has been a top priority for many reformists, even as a condition for their participation in the June election.

But some reformist leaders disagree. Former interior minister Abdullah Nuri believes that addressing the deteriorating economic situation and the continuing external threat against Iran posed by the U.S.-led sanctions regime is more urgent than the release of their political comrades from detention.

In addition, Nuri worries that the insistence on the release of political prisoners before the reformists agree to participate in the election will force them to play a game under rules set by their foes. “We should take the first step and show our opponents that we are determined and serious,” Nuri told the monthly Aseman in October.

Former Tehran mayor Gholamhossein Karbaschi, who supported Karrubi in the 2009 election, has taken a similar position.

Also writing in Aseman, he recently asked: “Is it logical to ask our rivals to fulfill our ultimate demands so that we can win the competition with them? If political prisoners were to be released (and)… economic, cultural, and political situation and domestic and foreign policy be improved (before the election), then why should the reformists win power?

“These are in effect the reformists’ future programmes, and they must make an effort to fulfill them when they reach power and not make them conditions for participation in elections.”

Such words, along with rumours regarding the possible candidacy of former first vice president Mohammadreza Aref and former minister of education Mohammad Ali Najafi, have given the impression that at least some reformists are seriously considering participating in the election.

Some reformist groups have even declared that former president Mohammad Khatami will be their candidate despite the latter’s declaration last summer that he will not run.

Even the mention of Khatami’s name as a possible candidate, however, has unsettled the hard-line establishment. Iranian state television has gone so far as showing Khatami – something it had not done for years – and calling him a “companion of sedition”. Sedition is a term routinely used to refer to the protests that followed the contested results of the 2009 presidential election.

“Companions of sedition” could participate in the election, the television programme said, only if they renounced or recanted their support of sedition.

In December, the spokesman for the Guardian Council, the body that determines who is eligible to run for office, appeared to echo that view, insisting that the disavowal of sedition will make it more likely that candidates will receive favourable consideration.

The call for renunciation by institutions close to the Leader Ayatollah Ali Khamenei, however, was immediately rejected by key reformists. Cleric Mussavi Khoeiniha, the publisher of the now-banned daily Salaam, pointed out that the reformists had made former Prime Minister Mussavi their candidate in 2009.

One well-known reformist who did not want to be identified told IPS that the Leader and his close advisors don’t believe the country is facing such a serious crisis that they need reformists’ participation in the election as a means to enhance the legitimacy of the regime and promote national unity in the face of external pressures.

“They only need the people we can bring to the polls and not us. Why should we then place our votes in their pockets?” he said.

Khatami himself has ignored demands on him to renounce his support for the 2009 protests and has instead, along with former president Akbar Hashemi Rafsanjani, called repeatedly for a free and fair election.

In doing so, he has chosen to ignore Leader Khamenei’s criticism of “those who keep saying” that elections must be free. “In which country elections are freer than Iran? Be careful your words do not discourage people from participating in elections,” Khameni has warned.

Khatami reacted to the Leader’s criticism by saying that a free election simply means an election which is not engineered in advance for the purpose of achieving specific results.

“They say we will not give permission; you should participate in the election but only the way we want you to,” Khatami scoffed in a recent meeting with a reformist party.

Still, Khatami has remained vocal and has used the pre-election political environment to repeatedly sound the message that the reformists have not gone away and remain an important voice for articulating unmet needs and demands for political and social reform in the country.

These demands for a more open political and cultural environment tells Abbas Abdi, a well-known reformist journalist, that reformists should do as they did in the 1997 presidential election when Khatami’s surprise victory shocked the conservative establishment.

“Our understanding should be that there is an election, and we should participate in it. In all likelihood, we will not receive a lot of votes but maybe we will,” Abdi stated in an interview with the daily Etemaad.

A university professor who asked not to be identified was even more sanguine. “Even if there is no hope in the benevolence of the Leader, there must be hope in his limitations,” he told IPS.

Pointing to Khamenei’s aversion to being seen as interfering in the political process, the professor believes that, “Between Khamenei’s pretense of impartiality and hidden interventions, a space is created for the activities of political groups, including the reformists.”

As of now, however, it is not clear whether the reformists believe such a space exists and, if it does, whether they will even be allowed to try to seize it.

This week’s arrests of more than a dozen of young journalists who mostly work for reformist dailies and weeklies may be an omen that the traditionally more open pre-election environment may not be repeated this time.

While the charges against these journalists have not yet been announced, indications are that their arrests are not for their writings and relate to their alleged illegal contacts with “anti-revolutionary” Persian-language media outside of Iran.

The move suggests that the current political establishment in Iran remains highly sensitive and continues to treat the reformists not as competitors with different domestic and foreign policy outlooks but as a security challenge to the survival of the Islamic regime.