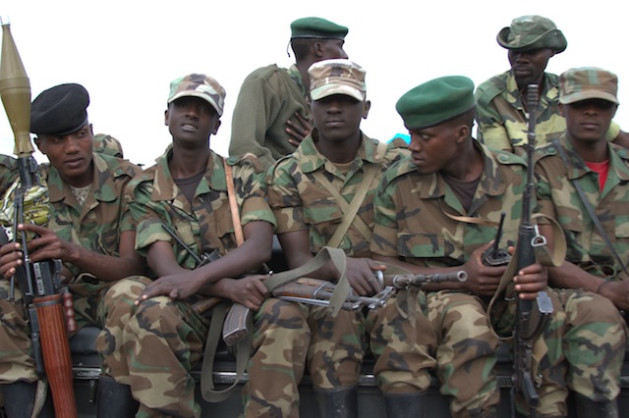 General Bosco Ntaganda Ntaganda was not the only M23 combatant who crossed the DRC/Rwandan border. He was followed by soldiers loyal to him, who are also wanted by the DRC government. Credit: William Lloyd-George/IPS

GOMA, DR Congo , Mar 22 2013 (IPS) - As the Rwandan government said on Thursday Mar. 21 that it would do all it could to ensure the speedy transfer of war crimes suspect General Bosco Ntaganda to the International Criminal Court, fighters loyal to him are also seeking asylum in the central African nation.

Ntaganda handed himself over to the United States embassy in Kigali, Rwanda, on Mar. 18 and is said to have demanded to be transferred to the ICC, which has accused him of war crimes and crimes against humanity in the Democratic Republic of Congo (DRC).

It appears that Ntaganda was forced to surrender to the ICC as a result of the fratricidal war within the M23 Congolese rebel group. Ntaganda has been on the ICC’s wanted list since 2006 for crimes committed between 2002 and 2003 in Ituri in eastern DRC.

He was the chief of staff of the former rebel leader Laurent Nkunda’s National Congress for the Defence of the People (CNDP), an armed militia group that has since become a political party in DRC.

But Ntaganda was not the only M23 combatant who crossed the DRC/Rwandan border. He was followed by soldiers loyal to him, who are also wanted by the DRC government for their role in a rebellion against the Congolese army. One of them is a 32-year-old soldier from M23, who refers to himself only as Mutunzi. For the past two years, Mutunzi spent most of his days fighting in Masisi district, a mountainous area in North Kivu in eastern DRC.

Despite the fact that Ntaganda was wanted for war crimes, which include recruitment of child soldiers, rape and sexual slavery, Mutunzi told IPS that he still looked up to the general. “Over the past few months, most of the M23 fighters were aware that General Ntaganda was wanted by the ICC for war crimes, but he was still the most respected senior officer,” he said.

Then came the night of Mar. 16, just weeks after the rebel group had split into two factions – those loyal to Ntaganda’s faction, which was led by Jean-Marie Runiga, and the followers of General Sultani Makenga.

“The reason was mainly due to the fact that our ammunition had run out,” he told IPS in Kigali, where he has surrendered to Rwandan officials and is currently seeking asylum, along with other combatants from M23.

The M23-Runiga rebels were pushed out from their position to Nkamira camp, a transit site for Congolese refugees in western Rwanda – about 640 soldiers and officers with their top leaders, including Runiga and General Baudouin Ngaruye, Runiga’s chief of staff.

That same day the M23-Makenga faction announced the end of its military campaign.

Meanwhile, Rubens Mikindo, the federal president of Etienne Tshikedi’s Union for Democratic and Social Progress, the largest opposition party in the DRC, told IPS that even though Ntaganda handed himself over to the ICC, he should not expect leniency.

“Bosco Ntaganda served both the Kinshasa and Kigali regimes. Whatever he reveals after he has been handed over to the ICC won’t change anything, as was the case with Thomas Lubanga,” Mikindo said.

The ICC sentenced Lubanga, an ally of Ntaganda, to 14 years in jail last July. He had been transferred to the court in 2006, after being arrested by United Nations peacekeepers in 2005.

Ntaganda fought in the Rwandan genocide that ended in 1994 and later returned to DRC where he led a number of rebellions and at one stage was integrated into the Congolese army.

The Congolese government acknowledged reintegrating Ntaganda into the DRC army. This was done to meet the provisions of the Mar. 23, 2009 peace agreement – where the CNDP signed an agreement with the DRC government to become a political party and have its soldiers integrated into the Congolese army.

Later on, however, Ntaganda was accused of masterminding the M23 rebellion in April 2012, where mostly former CNDP soldiers turned against the government because of the poor conditions in the army. It resulted in the capture of Goma, the capital of North Kivu, in November.

Gaston Musemena, a close colleague of DRC President Joseph Kabila and a member of the National Assembly, concurred: “The DRC worked with Ntaganda in the interests of peace. Once he overstepped his mandate, the head of state’s only option was to cut ties with him.”

“Whatever revelations Ntaganda might make, this country will remain undivided,” he told IPS.

Chrysostome Kwede, a Kisangani lawyer in northeastern DRC, had a different view. “If Ntaganda’s arrest is not a charade, some members in the Congolese government who were involved in his crimes will be very worried. Ntaganda will finger some senior people in Kinshasa and Goma,” he told IPS.

Meanwhile, Goyon Milemba, who chairs a network for the reform of the security sector in North Kivu, told IPS: “The disintegration of M23 has made the possibility of a peace agreement more elusive.”

Godefroid Kä Mana, the co-author of a Jan. 15 open letter to the U.N. Secretary General by 20 eminent persons calling for a firm attitude towards the M23, challenged the one-sided version of events in eastern DRC. Kä Mana believes that “the focus on only one rebellion obscures the role of other militia.”

“Kinshasa’s responsibility in the spread of arms in Kivu is common knowledge. An armed group can be a ‘negative force’ by day, but ‘a positive force’ by night in support of the government,” Kä Mana, who is also the chair of the Pole Institute, an intercultural centre in the Great Lakes region, told IPS.

“With good governance, the war will end because there will be no fuel to justify the rebellions,” Kä Mana said.