To Walk Down The Street 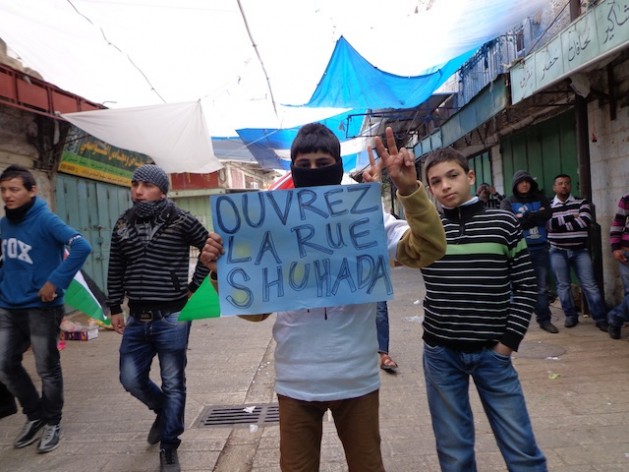 HEBRON, Occupied West Bank, Mar 1 2013 (IPS) - Molotov cocktails, clouds of teargas, live gunfire, ambulance sirens wailing as they ferried the wounded, and round after round of rubber-coated metal bullets exploding in the street…these were familiar scenes in Palestinian protest.

The protestors, supported by Israeli and international activists, were in a campaign that began Friday last week to open Shuhada  Street in Hebron in the southern West Bank to Palestinian pedestrians, motorists and businesses.

At the beginning of the second Intifadah in 2000, the Israeli military also banned Palestinian pedestrians from accessing the street, allegedly for the protection of approximately 800 Israeli settlers, illegally ensconced in the city, and surrounded by approximately 200,000 Palestinians.

Muhamad Mohtaseb, 22, runs a souvenir shop on Shuhada Street. His shop stands isolated in the deserted street as Israeli settlers walk past and soldiers monitor movement.

Mohtaseb is one of the few Palestinian shop owners who resisted the political and economic pressures to close his shop, but his business has been strangled, forcing him to explore other commercial ventures as his family battles to survive.

“Before the second Intifadah we had lots of tourists coming here, and they were a major source of income. But tourists are now afraid to come here as they think it is dangerous. Palestinians, who comprised our other main source of revenue, are not allowed to walk on this street,” Mohtaseb told IPS.

“My family used to make 300 euros daily and now we are down to 20-30 euros a day if we are lucky. I’m married with a son and I also support my brothers, sisters and parents. I was forced to stop my education and couldn’t go to university because of our financial situation.

“I’m now trying to open a tourist travel business so that we can survive as there are some internationals who are interested in alternative tourism and seeing for themselves what is happening here,” said Mohtaseb.

“But it’s not only the economic situation that is the problem. As one of the few Palestinian shop owners who refused to close down and move away under pressure, I’m often a target for abuse from Israeli settlers who swear, spit at, threaten and sometimes physically abuse me,” Mohtaseb told IPS.

Just around the corner is a tiny grocery store belonging to Izhak Kahsha, 45, father of three children, who ekes out a hand-to-mouth living from local Palestinians. In order to get there one has to cross through several Israeli checkpoints with turnstile barriers.

Like Mohtaseb, Kahsha’s business has been decimated by the closure and restrictions. “Many of my customers used to come here and buy in bulk because they could drive home with the groceries. Now because vehicles are forbidden from coming near and people avoid the area because of the tensions I have to rely on a few customers who buy only enough to carry by hand,” Kahsha told IPS.

Zlikhah Mohtaseb, in her late forties, and her 75-year-old mother were forced to move to one of the houses overlooking Shuhada Street in 2006 for financial reasons. Zlikhah showed IPS the cage that surrounds her home.

“Due to settlers continually stoning the windows I asked the Hebron Rehabilitation Committee to assist me in installing iron grating on the side of the house overlooking the street for some protection. It has not stopped the attacks, however,” said Zlikha.

Israeli rights group B’tselem says, “Like other residents still living on the street, Zlikhah and her mother are forced to enter and leave their home by climbing a steep flight of stairs that serves as a side entrance. As they are forbidden to walk on the main street, they must take circuitous routes and go through two checkpoints in order to reach the mosque.”

In April 2007, following reports in the Israeli media and public pressure on the issue, Israel’s Civil Administration began to issue temporary permits to some Palestinians living on the street. In 2005, the Hebron Municipality and the Association for Civil Rights in Israel petitioned Israel ‘s High Court of Justice to open the street to Palestinian movement.

The state in response said the street has been closed by mistake and that Palestinians would be allowed to walk on the street, although restrictions on businesses and vehicular traffic would remain. However, Shuhada Street remains closed to Palestinians. (END).