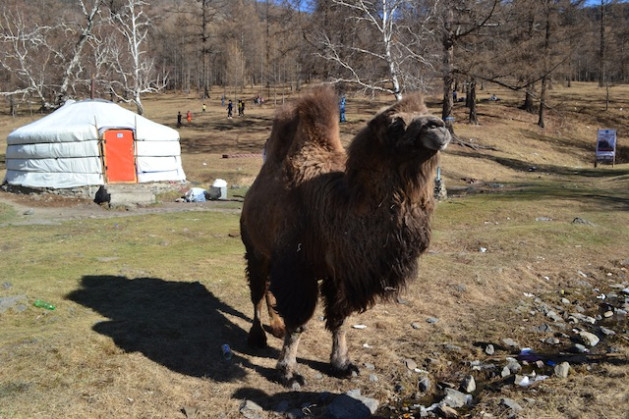 ULAANBAATAR, Mongolia, May 6 2013 (IPS) - Genghis Khan knew about hard times. The founder of the Mongol Empire, which spanned most of Eurasia until roughly 1227, Genghis and his clan had to survive on their wits and natural surroundings, often resorting to meals of “green leafy things” when food was scarce.

Today that history seems to have been lost, with most Mongolians dismissing fruits, vegetables and cultivation as “unmanly”, according to Marissa Markowitz, a food security consultant with the ministry of industry and agriculture (MoIA).

Less than one percent of the country’s land is used for crop production. Instead, following the instincts of their ancestors who were primarily nomadic herders, Mongolians rely on livestock for their food needs, guiding massive herds across the vast grasslands of the Central Asian Steppes.

The Soviet-era meat and dairy industries that flourished here between 1921 and 1990 collapsed along with the Soviet Union, robbing Mongolians not only of the centralised economic structure that had regulated production and distribution for years, but also of major markets for their products, tipping the country towards food insecurity.

One third of households in urban provincial centres and the capital, Ulaanbaatar, were found to be food insecure in 2009, according to a seminal study by Mercy Corps.

The standard diet here is comprised of wheat, meat and rice, said Markowitz, citing reports by the United Nations Food and Agriculture Organisation (FAO). Research released by the ministry of health in 2008 and 2010 revealed that a full third of the country’s population of three million eat no fruits or vegetables at all.

In an attempt to curb imports and boost agricultural production, the government has imposed tariffs on Russian wheat, which previously sold for less than locally produced wheat.

A grain importer named Erdenetsetseg, who operates at the Bars wholesale market in Ulaanbaatar, told IPS, “Russian flour has become almost impossible to sell because of the taxation” that has taken the price of imported flour to 24 dollars per 25-kilo bag, against 18 dollars for local produce.

Though the new rule imposed by the Mongolian government has been hurting importers, who brought in 70 percent of the nation’s wheat supply until 2008, according to the MoIA, it has given local farmers the breathing room they need to compete with imported produce.

The northern Selenge province now “resembles the Midwest of the United States”, with kilometre after kilometre of potato fields stretching outward as far as the eye can see, Markowitz said.

Little knowledge of vegetable use stemming from a lack of access to nutritional information, doctors and health specialists contributes to this imbalanced diet, which particularly affects the one in five families living on 1.25 dollars a day.

Vegetables and fruits are expensive compared to the monthly minimum wage of about 100 dollars. Spring is a particularly difficult period, when national food stores are depleted and prices skyrocket – during this time, local sea buckthorn berries sell for about three to four dollars a kilo; carrots for roughly two dollars a kilo and tomatoes for nearly four dollars a kilo.

A severe lack of storage capacity in rural areas and informal settlements known as “ger districts” — shantytowns comprised of traditional Mongolian felt tents, or yurts — exacerbates the problem, with transportation costs adding to the price.

The poverty index is 23.4 percent in Mongolia’s capital Ulaanbaatar, according to the United Nations Development Programme (UNDP), with 60 percent of the city’s one million residents living in informal settlements or shantytowns.

A fifth of Mongolian children under the age of five are stunted, according to the MoIA’s statistics on malnutrition.

Experts on food security are also concerned about extreme desertification brought on by the introduction of a market-based food system, which saw herds increase by 20 million heads between 1999 and 2007.

In light of these alarming trends, the country has recently embarked on the slow process of rebuilding its agricultural sector.

In the northwestern Songino Khairkhan district in Ulaanbaatar, in a neighbourhood crowded with gers surrounded by wooden fences, a two-acre farm flanked by snow-capped mountains is thriving. Warm greenhouses nurture vegetable seedlings and, outside, the hardy sea buckthorn bush saplings are preparing to explode into ripe orange fruit.

This is the headquarters of the Mongolian Women Farmers Association (MWFA), a volunteer-led NGO that works in all 21 of Mongolia’s provinces to promote vegetable and fruit cultivation among poor families.

The climate here – cold and dry with a short growing season from May until September – is ideal for potatoes, beets, cabbage, carrots, onions and radishes, which can be stored during the long winter months when temperatures drop to minus 40 degrees Celsius.

But a survey published by the Mercy Corps showed that despite 40 percent of the urban poor having access to land, only six percent grew their own vegetables – and even these families cultivated the produce for their own personal use rather than additional income.

Markowitz, coordinator of the project, says the NGO has already worked with 4,500 families on “enhanced nutrition and resource conservation”, and supported vegetable gardens as a “viable way to generate household income”. MWFA also teaches families how to cook and preserve vegetables by canning.

The organisation hopes this will reduce dependence on Russian and Chinese imports that typically flood the local market during the cold season that lasts from October through April.

A volunteer named Tuya told IPS the farm is very popular among locals, particularly for their cultivation of sea buckthorn, which thrives in Mongolia’s harsh weather and helps to stem desertification.

Over 30 grafted varieties of the plant grow in the central and northeastern parts of the country. The yellow berry, known as a “super plant,” is high in vitamin C, omega-3 fatty acids and can remove toxins in the body. Families freeze harvested berries in the winter, and often turn them into juice for a quick meal.

In 2007, the far-western Uvs province, considered the birthplace of wild buckthorn domestication in the 1940s, attained the coveted geographic indicator status, comparable to the Champagne region in France, which ensures a higher price for specialised produce. Today, Uvs supplies the nation with 60,000 saplings yearly, according to a FAO case study.

In addition to helping spread sea buckthorn plants, MWFA has published two books and 30 texts on agriculture, using their greenhouses as teaching aids. They also provide free classes to the local community in the surrounding ger districts.

One of the teachers, Bayraa, told IPS classes span twenty days and instruct individuals interested in subsistence agriculture or entrepreneurs aiming to start a business.

Some teachers travel to the countryside to impart knowledge of vegetable cultivation to populations in more remote provinces.

It remains to be seen if sea buckthorn berries or vegetables can stand alongside meat or dairy as a traditional Mongolian meal, even though agricultural production was practiced on the steppes as far back as 2,000 years ago.

Today, Ulaanbaatar boasts over 20 vegetarian restaurants, helping to fuel a demand for local greens and reduce the impact of herding on the country.

If the expansion of agriculture here is successful, Mongolia could build a different kind of empire to Genghis Khan’s – one with nutrition and food security at its core.