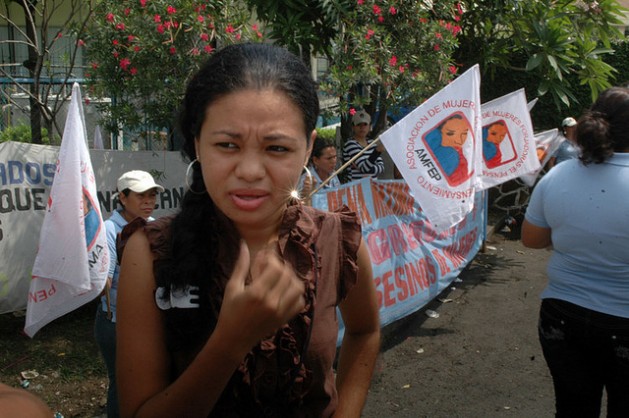 Fatima Hernández, a Nicaraguan rape victim denied justice in a high-profile case, protesting in front of the Supreme Court in 2011. Credit: Oscar Sánchez/IPS

MANAGUA, May 30 2013 (IPS) - Conservative sectors in Nicaragua have launched an offensive against the Comprehensive Law Against Violence Toward Women, seeking amendments including an obligation for women victims to negotiate with their abusers, human rights groups reported.

The Supreme Court (CSJ) decided on May 23 to ask the single chamber legislature reform Law 779, which has been in force since June 2012.

The vice president of the CSJ, Rafael Solís, said the Supreme Court believes it is essential to modify Article 46, which prohibits mediation between women and their assailants for the crimes defined in the law. By changing this it is partially admitting a series of appeals lodged against the law, which included calling for it to be ruled unconstitutional.

The CSJ’s request is a victory for religious groups and other powerful conservative sectors that have waged a steady campaign against the law during the 11 months it has been in force, arguing, for example, that it discriminates against men.

The law stipulates that the state and its institutions have a duty to guarantee the physical, psychic, moral, sexual, patrimonial and economic integrity of women. It also punishes any kind of gender-based discrimination, including femicide (gender-based murders of women).

Solís said the CSJ judges decided by consensus that the law should establish mechanisms for mediation between victims and assailants as an alternative form of conflict resolution, in cases where the alleged crimes carry sentences of less than five years in prison.

Mediation is a legal mechanism in the Nicaraguan justice system for conflict resolution in private law, but not in crimes of public law such as those covered by Law 779. In fact, in family law, mediation is only used in cases of property rights, divorce or separation.

The law was approved by a large majority in parliament and has overwhelming social support, according to opinion polls. It put Nicaragua among the countries with a comprehensive law against gender violence, in line with international conventions.

Since March, when the CSJ began scrutinising the appeals, the debate on the law has reopened, confronting the branches of government, political groups, churches and civil society organisations, especially those defending women’s rights. Protest demonstrations in favour of and against the law have been held in front of the Supreme Court.

Appeals were lodged against the law by legal experts, on the grounds that it violates the principles of equality and presumption of innocence, and enshrines “radical feminist” positions by eliminating mediation in cases of domestic violence.

Bismarck Dávila, one of the five lawyers lodging the appeals, told IPS that the law violates the constitutional principle of equality “because it designates special judges to judge men, while women who commit the same crimes are tried by ordinary judges.”
Law 779 establishes special courts and prosecutors for crimes of gender violence, as well as special police units for women.

According to Dávila, the law also violates the presumption of innocence because from the moment he is accused, “the man is presumed guilty.” He further argued that it violates the right to a defence because “the efforts of public or private defenders are useless in the face of a law that treats men unequally.”

The debate has taken on religious overtones after representatives of evangelical churches and the Catholic Church preached from the pulpit against a law that “destroys families by punishing men.”

On May 7, Abelardo Mata, a Catholic bishop, went so far as to say: “The new number of the beast is not 666, but 779.” No clarification or apology has been issued by the Catholic hierarchy.

In parliament, the majority is against amending the law. The first secretary of the legislature, Alba Palacios, recalled that the law was approved by 82 votes out of 92 in February 2012.

In her view, the law should be enforced without amendments, “because before it was approved it was widely debated; all sectors were consulted; and it is the result of those broad consultations.”

Irma Dávila, the chair of the parliamentary Justice Commission, said: “80 percent of the Nicaraguan population supports Law 779, so we cannot say that there is a large majority against the law.”

The governing Sandinista National Liberation Front, which holds 63 of the 92 seats in parliament, holds the key to accepting or rejecting the CSJ’s request to modify the law.

If parliament turns down the CSJ’s request, the Supreme Court can alter the way the law is enforced by issuing instructions to judges. In fact, it has already sent out a circular with guidelines for courts to reduce sentences in cases of crimes punishable by less than five years’ imprisonment under Law 779.

Juana Jiménez of the Movimiento Autónomo de Mujeres (MAM – Autonomous Women’s Movement) said femicide statistics for 2012 show why mediation should not be required: 13 out of the 85 women murdered because they were female had entered into mediation with their assailants, after reporting them to the authorities.

“Experience shows that far from solving the problem, mediation only gives men an opportunity to organise their revenge, kill the woman and then flee,” she told IPS.

Amnesty International (AI) issued a press release in support of the law. “The violence perpetrated against women and children is what breaks up families, not legislation designed to help victims escape from violence and hold abusers to account,” said Esther Major, AI’s researcher on Nicaragua.

According to figures from the special police units for women, an average of 97 men per day were reported to the authorities for abusing women in Nicaragua in the first quarter of the year, an increase of 30.7 percent compared to the same period in 2012.

So far, 692 cases have resulted in conviction and sentencing, and 297 in acquittal, while the remainder remain open.