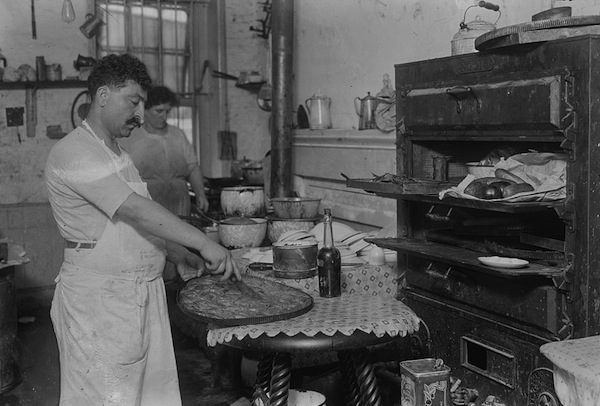 A Syrian pastry chef in Little Syria. Photo courtesy of Save Washington Street.

NEW YORK, Jun 20 2013 (IPS) - A brick red, six-story tenement house, St. George Melkite Church and a community house in desperate need of repair are nearly all that remain of a once thriving Arab-American community in downtown New York City.

High-rise buildings now populate the area of Lower Manhattan formerly called Little Syria that has been a gradual casualty of industrialisation and urbanisation and which Arab-American youth are fighting to keep alive.

With the church declared an official landmark in 2009, one organisation, Save Washington Street, hopes to preserve other remnants of this neighbourhood. Its primary goal is to achieve landmark designation for the community centre, which used to provide immigrants with resources ranging from jobs to glass bottles of milk, said Carl Antoun Houck, director of Save Washington Street.

"The Syrian refugees and their history are...not so new to this country."
-- Carl Antoun Houck

Norah Arafeh, an undergraduate student at University of California Berkeley, serves as the outreach director of Save Washington Street and was drawn to the cause by her Syrian roots.

Arafeh’s father was raised in a neighbourhood of Damascus, Syria and came to the United States when he was 17, said Arafeh, who joined the Little Syria campaign almost two years ago and now reaches out to various groups to solicit support for the neighbourhood.

“The importance of preserving history – both in the U.S. and in Syria, in this case – cannot be understated,” Arafeh said.

For many Arab Americans today, Little Syria was where ancestors arrived in pursuit of the American dream. Among them were Houck’s mother’s family, who emigrated from Lebanon.

Preserving the past is a huge part of every Arab American, Houck said, raising his voice amid the din of construction work in the area.

With the Obama administration considering resettling of hundreds of Syrian refugees in the United States, Houck pointed out, “The Syrian refugees and their history are, after all, not so new to this country.”

Little Syria once extended from what was the World Trade Centre down to Battery Park and to the west of Broadway behind Trinity Church to West Street, according to Joe Svehlak, an urban historian and preservationist.

“It was a melting pot with 27 different nationalities living together in harmony and peace. They were Syrians, Lebanese, Slovaks, Germans, Irish,” he said.

In Little Syria’s heyday, from the late 1800s to the mid 1900s, it wasn’t surprising to find a German living next to a Lebanese, who would be living adjacent to a Syrian, with all of them trusting one another, Svehlak added.

Peddling was the main occupation of the immigrants living in the area, which was comprised of merchant houses, restaurants, cafes and factories making the linens from which immigrants earned livelihoods, said Todd Fine, a historical and strategic adviser for Save Washington Street.

While economic factors were the main impetus for emigration from Greater Syria, many others also left to escape persecution and conscription in the Ottoman army, according to historians.

Those who lived in the area, Svehlak said, actually referred to it as the “Mother Colony”, while outsiders from other parts of the city called it Little Syria, dubbing it thus because the majority of residents were Arab Christians from Lebanon, Syria, Palestine and Jordan, as well as parts of Iraq, which was once part of Greater Syria, said Fine.

In the early 1900s, some immigrants in Little Syria moved to other parts of the city, primarily Brooklyn, where the burgeoning population could have more space, and real estate prices were reasonable.

Still, it remained a robust community until the 1940s, according to Svehlak.

It was when families were told to move their homes to accommodate the entrance to the Brooklyn Battery Tunnel, built in 1948, that dealt a huge blow to Little Syria, and a majority of the neighbourhood was destroyed, according to Fine.

Many families temporarily vacated the area after the attacks of Sep. 11, 2001, and some of those who remained were asked to leave during the subsequent reconstruction of the World Trade Centre.

At that point Edward Metropolis, 52, had to leave his studio apartment, where he had lived his entire life and which is part of the last standing tenement in the area.

“I came back after four months, and some of the people who left never came back,” he said.

Fine said that in a way, the years after 9/11 encouraged construction and thus contributed to the destruction of the history of the area, said Fine.

With Jun. 20 observed as World Refugee Day, the history of a community who immigrated here more than a century ago is largely forgotten by New Yorkers, according to experts.

“It’s a tragedy,” lamented Fine. “While everybody knows about Chinatown and Little Italy, everybody seems to have forgotten about Little Syria.”

For Sarab Al-Jijakli, a Syrian-American who has been involved in raising awareness and humanitarian aid since the beginning of the Syrian revolution in March 2011, the neighbourhood is more than just a piece of history.

“It helps to build confidence regarding our role and presence in the American narrative – our history in this country, which did not begin on 9/11,” he said. “Little Syria helps reclaim this narrative from Islamophobes and bigots who wish to bury it.”

History links generations of immigrants and teaches people about Arabs’ contributions in building America, Al-Jijakli added, even as the existence of Arab history in the city has been overshadowed by the current unrest in the Middle East, especially in Syria.

According to the United Nations, close to 93,000 people were killed in fighting between the government and rebel forces in Syria between March 2011 and April 2013.

Arafeh believed that in the United States, the importance of preserving Arab American history has been trivialised.

“The demolition and raiding of major cities of history denies future generations of the privilege and historical heritage that is their patrimony,” she concluded.