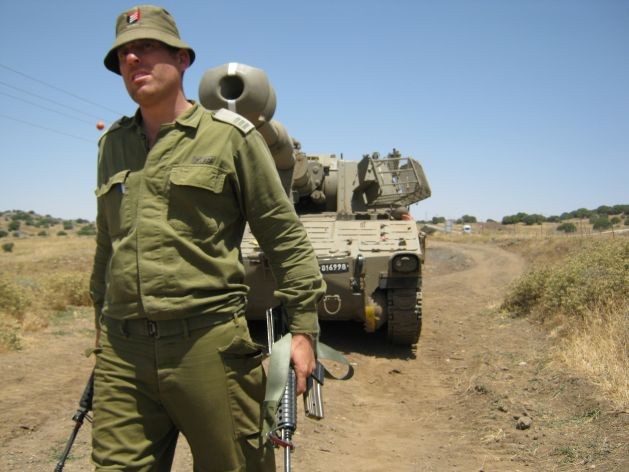 An Israeli patrol on the border with Syria. Credit: Pierre Klochendler/IPS.

KIBBUTZ EIN ZIVAN, Israeli-Occupied Golan Heights, Jun 19 2013 (IPS) - It all happened within ten days – Syria’s civil war fought metres away from Israeli orchards abutting the ceasefire line; Austrian peacekeepers hastily evacuating the Demilitarised Zone (DMZ) that separates Israel from Syria; fears of a total collapse of the UN Disengagement Observer Force (UNDOF). All while the cherry-picking season is at its peak.

Staff Sergeant Heinz Brandl of the 378-strong Austrian UNDOF battalion deplored last week’s evacuation. “Our government decided that it became too dangerous here. Most of us are unhappy to leave. Unfortunately we must follow the rules of our politicians. There’s no way back.”

The Austrian pullout came in the wake of the short-lived capture on Jun. 6 of the Syrian town Quneitra by rebel Free Syrian Army forces. Four hours later, Syrian army forces loyal to President Bashar el-Assad dislodged the rebels. The 911-member UN force was caught in the crosshairs of the fighting. Two peacekeepers were wounded.

“Austria go home, return to the Anschluss!” railed an Israeli as he witnessed the sudden pullout from the Ein Zivan lookout, comparing the admission of powerlessness by the peacekeepers to the capitulation of Austria to Nazi Germany’s annexationist demand in 1938.

At the Quneitra border crossing where the UNDOF headquarters are located, the loyalist Syrian flag flies again on the masthead opposite the Israeli flag.

From kibbutz Ein Zivan’s lookout, smouldering fields attest to the battle, the fiercest in the area since the start of the civil war.

Who controls which part of the Golan Heights is now easily identifiable. The charred fields are in Syria. The lush trees are on the Israeli side. This is the height of the cherry season.

Ein Zivan’s community chairman Ronen Gilboa witnessed the fighting. “At 5am, we heard gunshots and explosions while we were picking cherries. Within minutes, the army asked us to leave the orchards.”

Gilboa points out that during the clash, Syrian tanks outflanked the rebels from the area adjacent to the ceasefire line, preferring to fire towards their own territory lest Israel retaliates. “The whole area is a north-south passageway for the rebel.”

Israel nonetheless lodged a customary complaint to the UN because it said five Syrian tanks and four Armoured Personal Carriers had entered the DMZ.

Over the past year, Syria’s civil war has leaked across the ceasefire line. Errant mortar shells occasionally land on the Israeli side. Israel then returns fire towards the source of fire.

Croatia withdrew its force after a UN convoy was held hostage in March by Syrian rebels.

“The disintegration of the UN force in the Golan makes trenchant the fact that Israel cannot lean on international forces for its security,” Netanyahu told his cabinet.

UNDOF chief Herve Ladsous told a closed emergency session of the United Nations Security Council that the latest incident brought Israel and Syria on the brink of the most direct military confrontation on the Golan Heights front in 40 years.

The 1974 Separation of Forces Agreement between Israel and Syria formally ended the 1973 war. UNDOF has since been operating in the buffer zone, supervising the ceasefire.

Rhetoric aside, Netanyahu shares this opinion.

Every six months, the Security Council must extend UNDOF’s mandate for a further six months. The current mandate expires by the end of the month.

In a recent report to the Security Council, UN Secretary-General Ban Ki-moon recommended the renewal of the UNDOF mission for six more months, until Dec. 31, calling it “essential”.

This is a view shared by both Netanyahu and Assad. Ban announced that Israel and Syria have given their approval to the proposed extension.

Fiji is expected to somehow fill the UNDOF vacuum by sending 170 military and medical personnel to the Golan at the end of June.

Just kilometres away from the UN border crossing around which the recent clash took place, an Israeli reserve artillery battalion prepares for what a soldier calls “a long-planned military exercise.”

In a compound not far from what now looks more like a frontline than a ceasefire line, Israeli tanks trundle by, discharging plumes of exhaust fumes and dust. There’s no need for a smokescreen to hide from the Syrian line of sight, says Gilboa, himself a former armoured regiment commander.

Armoured warfare is often practised on this swath of territory. During the 1973 war, Israel and Syria fought one of the largest tanks battles since World War II on the Golan as Syria tried to recapture the territory conquered by Israel in 1967, to no avail.

“As long as Assad is in control, we’re not that concerned,” says Gilboa. “The civil war doesn’t affect our daily lives. We train our people to be alert, that’s it.”

Syria’s civil war may have reached the fence. Yet, on the Israeli side 50 metres away from the border, visitors have fun insouciantly reaping the fruit of their own labour. Self cherry-picking is a major touristic attraction in this area. Just last weekend, 6,000 tourists flocked to Ein Zivan’s orchards.

Naftali Ashkenazi, a resident of Holon in central Israel, is unfazed by the rising tension: “I’ve been through much worse during the 1973 war.”

“It’s all a little surreal when you hear bangs and booms just across the border,” says kibbutz member Neta Bahat. “But our main concern is to prevent the birds from eating the cherries from the trees. Our livelihood depends on it. I hope nothing will change here. And, may calm prevail.”

By the end of the month, the kibbutz will have produced 100 tons of cherries. That’s half of last year’s harvest. The winter was too hot, the farmers say.