BARCELONA, Spain, Jun 25 2013 (IPS) - Economy professor Arcadi Oliveres has become a popular face of the growing discontent in Spain because he calls a spade a spade.

“I have called for Prime Minister Mariano Rajoy to be impeached for destroying the welfare state,” he said.

But Oliveres, from Catalonia in northeast Spain, is not alone in his mission. He and Teresa Forcades, a Benedictine nun and medical doctor, have created an unusual platform representing people who are fed up with the country’s leaders who, they say, failed to do anything to prevent the severe economic crisis tearing Spain apart. 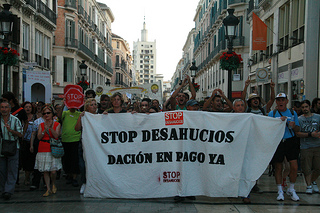 Protests, like this demonstration against foreclosures in the southern city of Málaga, are being held almost every day in some part of Spain. Credit: Inés Benítez

The platform is also supported by leftwing parties and sectors related to health, housing and education – areas that have been drastically affected by the conservative Rajoy administration’s budget cuts.

“There are good, well-intentioned, well-educated people who don’t agree with the economic decisions and the current political process,” Oliveres told IPS. “Our mission is to bring together people from these three sectors and come up with a joint candidate for the parliamentary elections in Catalonia in 2016.”

Oliveres blames the country’s political leadership, both the governing centre-right People’s Party (PP) and the Spanish Socialist Workers’ Party (PSOE), for the crisis that has driven up unemployment levels in Spain to among the highest in Europe.

Anna Torres, a sociologist from Barcelona, concurs with Oliveres. “The leaders are not connected to the people, and the parties aren’t either. That is why people are looking for answers in social platforms,” she told IPS.

“Europe has gone through many phases and has made leaps and bounds in terms of social welfare,” she said. “It would be a pity to have to go back to working in buildings that collapse, like what happened in April in Bangladesh (where 1,127 garment factory workers were killed), or to working as slaves, like in China.”

Torres said the economic model is changing in Spain. “There is a crisis in the construction industry and traditional productive activities are disappearing, and we haven’t specialised yet in highly technological industries,” she said.

“We were in the process of doing that when the crisis hit, and now there are many trained workers who can’t find jobs,” she added.

Oliveres said his group was working for “a cooperative Catalonia infused with solidarity, without an army, that helps the Third World and is independent.

“I have recently been in Granada (in the south), Alicante (in the southeast) and the Basque Country (in the north), and after hearing me explain our ideas, people want to start doing something similar,” Oliveres told IPS in an interview in the offices of Justicia i Pau, the Christian-based NGO that he heads.

“We have nearly 40,000 people who have signed up to (the web page of) our platform Procés Constituent a Catalunya since it was launched in April, and so many speaking invitations that we could visit all of Catalonia 50 times,” he said.

The Procés Constituent is one of the numerous citizen groups and associations that have emerged in Spain since May 15, 2011, when the “indignados” or 15M movement – Spain’s “occupy” movement – was born out of a protest in Madrid’s Puerta del Sol square.

The encampment set up at that time in the square by protesters gave birth to the movement that is opposed to the government’s austerity measures and social cuts and is demanding jobs, affordable housing, solutions to the wave of foreclosures and evictions, economic equality, social justice, and democratic control over banks and corporations.

The growing citizen movement is also protesting the unprecedented corruption that has come to light in this country, in which high-level officials and even members of Spain’s royal family are implicated.

Analysts estimate that just 15 of the 1,600 cases of embezzlement, bribes and tax evasion in the courts today involved at least seven billion dollars in public funds. More than 1,000 of the people prosecuted in connection with the cases are political leaders.

Nearly every day a protest is held somewhere in Spain, and some observers are warning about a social uprising.

Social movements like the Procés Constituent now bring together more people than the country’s traditional trade unions. Most of these new groups are organised horizontally and decisions are reached in assemblies – the legacy left by the 15M.

The protests and demonstrations have taken many forms. An association of writers from Catalonia, Poesia en Acció, held a poetry marathon to benefit the Platform for Mortgage Victims (PAH), one of the largest citizen associations in the country, which is helping thousands of people who are losing their homes to foreclosures.

“Poesia en Acció is carrying out actions in solidarity with social groups that are suffering because of the crisis,” poet and literary critic Guillem Vallejo, the president of the organisation, told IPS.

“In the past two years, we have focused on helping Spanish groups due to the situation in our country. We used to help countries in Africa and other parts of the Third World,” said Vallejo, who along with 60 other poets and 80 students from the group’s workshops published the book “Poesía Solidaria” (Solidarity Poetry), whose proceeds will go to PAH.

“We’ll give the money raised in the marathon (12 straight hours of poetry reading and a solidarity breakfast and lunch on Saturday Jun. 15) to PAH for projects that provide activities and psychological support for children whose homes are in the process of foreclosure, while the parents try to solve their legal problems,” Vallejo said.

Several associations of motorcycle riders organised a food drive for the needy on Sunday Jun. 23, in a campaign in the Canary Islands called “Moteros contra el Hambre” (Bikers against Hunger).

The national statistics institute reports that unemployment exceeds 27 percent – or six million people out of work in this country of 47 million. There are more than 70,000 families in Spain with no members working.