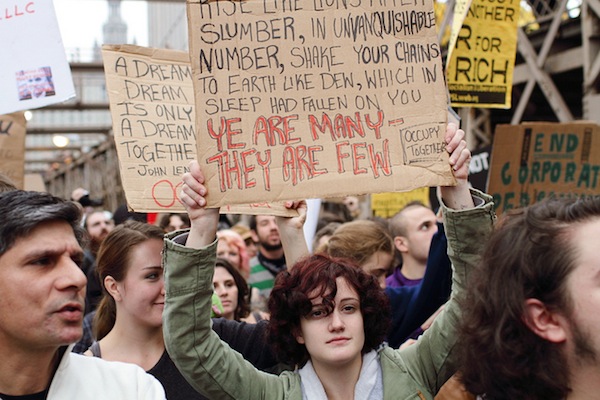 Over 700 people were arrested in a protest on the Brooklyn Bridge in October 2011. Credit: Paul Stein/CC by 2.0

NEW YORK, Jun 17 2013 (IPS) - Stories of struggle can be found all over the world, from a law classroom in Oklahoma and the brutal borderlands between the United States and Mexico to a Bedouin village in Jordan and wedding parties in Morocco, as the 24th Human Rights Watch Film Festival is showcasing.

Some films cover subjects that have been widely reported, such as the Occupy movement and Anita Hill’s sexual harassment case against Supreme Court judge Clarence Thomas, but they nevertheless delve beneath the surface, bringing fresh perspectives to well-known events.

In New York, the festival runs through the end of the week in two Manhattan cinemas. The festival revolves around themes such as lesbian, gay, bisexual and transgender (LGBT) rights, disability rights and migration. It has a separate category this year for U.S. human rights issues.

"The audience was really upset and moved by how far this country has gone in suppressing protests."
-- John Biaggi

“We don’t want anyone to ever think that we’re giving our country a pass,” John Biaggi, director of the festival, told IPS.

“99 Percent – The Occupy Wall Street Collaborative Film” (Audrey Ewell, Aaron Aites, Lucian Read, Nina Krstic, 2012), which presents the story of the Occupy movement, is part of this theme and has been of particular interest to moviegoers, Biaggi said.

“People have reacted very strongly to [the] film in a positive way…the audience was really upset and moved by how far this country has gone in suppressing protests,” he said.

Kindled by the Arab Spring and a summer of European unrest, the Occupy movement began in downtown New York City on Sep. 17, 2011 as Americans felt the rush of revolution take hold in Zuccotti Park.

Filmmakers Audrey Ewell and Aaron Aites told IPS that the film was set up as an experiment with 100 collaborators.

“We went to Zuccotti Park and saw how everyone congregated; [there was] a pastiche quality, a collage-like element, with people talking about a patchwork of issues,” Ewell said.

The filmmakers issued press releases and created a web site asking for collaborators on their project, with a large response. While some people who signed up were inexperienced, Ewell and Aites ensured that an experienced filmmaker always led shoots.

It wasn’t a “free-for-all”, Ewell said; rather, it was a highly coordinated and organised process between coasts.

“A lot of people just wanted to go and film a rally or a march and that was fine,” Ewell said. The filmmakers wanted collaborators to be able to choose the extent of their contributions.

Ewell and Aites became interested in the Occupy movement on Oct. 1, 2011, the day 740 protesters were arrested on the Brooklyn Bridge. They noticed that the mainstream media wasn’t covering the event at all.

“I was so disturbed by that…I grabbed my camera and went down,” Ewell said. After the Brooklyn Bridge arrests, the media switched from a blackout to a circus, Aites added.

The primary goal of “99 Percent”, the filmmakers said, was to present an accurate history of what really happened with Occupy, especially for those who didn’t have access to footage of the movement, whether on television or the Internet, at the time protests and demonstrations were taking place.

South of the U.S. border, “The Undocumented” (Marco Williams, 2013) examined the lives of those working on the border, watching hawk-eyed for migrants and tracking the patterns of soles in the sand.

Deaths of border-crossing migrants have increased since the 1990s, with hundreds of bodies found in the scorching Arizona desert every year.

As the immigration reform debate continues in the U.S. senate, “The Undocumented” shows the lengths some migrants will go to achieve their dream of coming to America, even to the extent of ultimately losing their lives.

Haiti received 5 billion dollars of aid money in 18 months, but the funds were not allocated rationally, Peck, former minister of culture in Haiti, argued. Two years after the devastation, by which time many outside Haiti cease to remember the earthquake, the rebuilding continues.

On the other side of the world, “Camp 14 – Total Control Zone” (Mark Wiese, 2012) followed a former North Korean labour camp inmate, Shin Don-Hyuk, as he adjusts to a new and normal life in South Korea.

Two hundred thousand people live in North Korean camps. Shin was born in one, his first memory of a public execution he watched with his mother.

Shin’s story of escape, which he now travels the world to tell, seem almost unbelievable, but footage smuggled out of North Korea by activists of a violent interrogation show that the horror is indeed real.

“Energising people who come and see the films, to get involved and to take action, that’s really what the festival is about,” Biaggi said.

The Human Rights Watch Film Festival runs until Jun. 23. Co-presented by the Film Society of Lincoln Centre and the IFC Centre, the festival has included a number of New York premieres.

Human Rights Watch recently established a disability rights division, which accompanies the festival’s dedication to screening films that focus on the issue of disability. The group estimates that there are around 1 billion disabled people across the world.

More films showing this week include “The Act of Killing”, executive produced by Errol Morris and Werner Herzog and directed by Joshua Oppenheimer, which shows a group of Indonesian former killers re-enacting their crimes in by mirroring films they enjoy, and “Camera/Woman”, about a divorced Moroccan woman who films wedding parties in Casablanca.