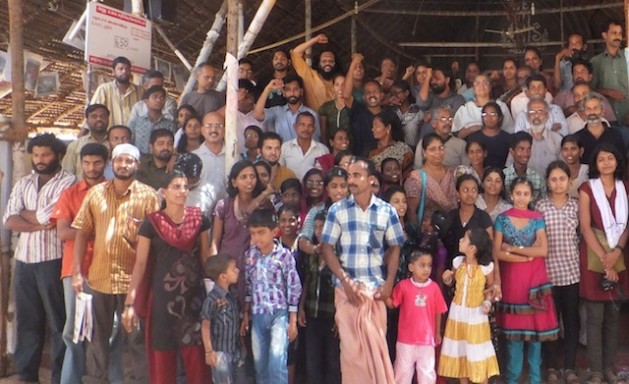 KUDANKULAM, India, Jun 14 2013 (IPS) - The Tirunelveli district in the southern Indian state of Tamil Nadu may seem idyllic, dotted with lush green fields, but upon closer inspection one sees signs of a battle that does not appear to be abating.

Locals here have been waging an incessant campaign against a proposed nuclear power plant that was supposed to be operational in 2012 and which is currently sitting idle 24 kilometres from the tourist town of Kanyakumari, located on the southern tip of the Indian peninsula.

A recent report by a group of prominent Indian researches has now added another issue to a long list of grievances with the Kudankulam Nuclear Power Project (KKNPP) that activists and residents have been compiling since August 2011: evidence of faulty material used in the construction of the plant itself.

Plans for the plant were first drawn up in 1988 under a bilateral agreement between Russia and India, but various political obstacles kept construction on hold for over a decade. It was not until 2001 that a fresh attempt was made to jump-start the 3.1-billion-dollar venture, which has an installed capacity of 1,000 megawatts (MW). 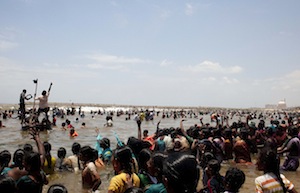 Things were moving smoothly until news of the meltdown at the Fukushima Daiichi nuclear reactor in Japan in March 2011 went viral. Fearing a repeat performance of the tragedy, locals here took to the streets, protesting lax safety standards and possible nuclear radiation in the event of an accident.

The government has refused to address protestors’ concerns, instead issuing blanket assurances that the plant has been constructed using state of the art instrumentation and contains a passive cooling system and other mechanisms that will enable it to withstand natural disasters like earthquakes and tsunamis.

Nalinish Nagaich, executive director of the National Power Corporation of India Limited (NPCIL), has repeatedly insisted that the equipment installed in the power station has undergone multi-stage quality checks.

Last month, in a 247-page ruling, a division bench of the Supreme Court of India consisting of Justices K.S. Radhakrishnan and Dipak Misra dismissed protestors’ concerns as “baseless”, adding: “The benefits we reap from KKNPP are enormous since nuclear energy remains an important element in India’s energy mix, which can replace a significant (quantity) of fossil fuels like coal, gas (and) oil.”

But new information brought to light in ‘Scandals in the Nuclear Business’, a report published by Dr. V. T. Padmanabhan, a member of the European Commission on Radiation Risk, exposes cracks in the government’s position and highlights the potential crises arising from the use of faulty parts.

According to the study, the Reactor Pressure Vessel (RPV), considered to be the “heart” of a nuclear station, has been built using an outdated, three-decade old model. In addition, various pieces of equipment supplied by Russia have been found to be faulty.

The report has only deepened a crisis of confidence that surfaced earlier this year when Russian Federal prosecutors booked Sergei Shutov, procurement director of the Russian company ZiO-Podolsk that supplied vital equipment to the KKNPP, on corruption charges.

Shutov was charged with “having sourced cheaper sub-standard steel for manufacturing components that were used in Russian nuclear installations in Bulgaria, Iran, China and India”, according to a joint letter sent by over 60 scientists to the chief ministers of Kerala and Tamil Nadu.

The New Delhi-based Coalition for Nuclear Disarmament and Peace (CNDP) has expressed serious concern over the recent scam, calling it a direct violation of the Atomic Energy Regulatory Board (AERB)’s safety norms.

Back in April, following a series of tests, the AERB itself acknowledged that four valves in the KKNPP were defective and ordered the NPCIL to replace the parts and surrender itself for review by the regulatory authority, before resuming construction.

Dr. A Gopalakrishnan, former chairman of AERB, has urged the government to put an immediate stop to the project until allegations of corruption and faulty equipment have been adequately addressed, and the safety and quality of the parts used to house the reactor have been determined. 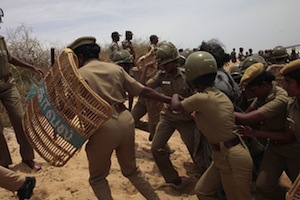 “The fact that a high-cost, high-risk nuclear reactor is (thought to have) defects…in its components and equipment even before it (has started operating) is highly unusual, and indicates gross failures at several levels in the AERB-NPCIL-Atomstroyexport (triumvirate),” he said, referring to Russia’s national nuclear vendor that stands accused of supplying low-quality parts to India.

N. Sahadevan, environmentalist and prominent campaigner against nuclear arsenals, told IPS that the recent scandal necessitated a “thorough re-examination of the safety aspects of the plant.”

Furthermore, according to Supreme Court Lawyer Prashant Bhushan, the NPCIL, which operates the KKNPP, has failed to comply with the 17 post-Fukushima safety recommendations made by a special AERB committee.

Meanwhile, thousands of villagers in and around Kudankulam continue their daily, peaceful demonstrations.

S. P. Udayakumar, leader of the People’s Movement Against Nuclear Energy, told IPS that the Fukushima catastrophe categorically proved that nuclear power projects are not aligned with the welfare of the people, especially those living in the vicinity, and are incapable of providing any kind of “security”, energy or otherwise.

Activists have also exposed discrepancies in the government’s claim that nuclear power is crucial for the Indian economy, pointing out that the country currently has just 4,880 MW of existing capacity, “which contribute to only 2.7 percent of the total electricity generation in the country,” according to Dr. E. A. S. Sarma, former Union Power Secretary of India.