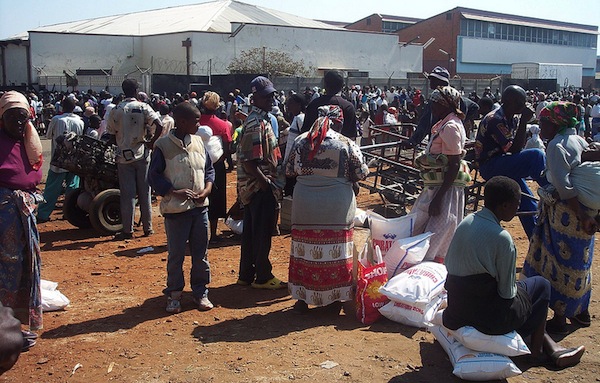 WASHINGTON, Jun 12 2013 (IPS) - Lawmakers attempted Wednesday to push along an ongoing effort to modernise U.S. international food aid policy amid mounting bipartisan support for the use of more locally grown food products over the long-standing practise of shipping U.S.-grown commodities.

“Increasing flexibility is extremely important in these programmes in order to reach more people and react to individual situations on the ground that require different solutions,” Katie Lee, advocacy and policy coordinator for international development at InterAction, a Washington-based network of U.S.-based NGOs, told IPS.

Implementing partners, too, have lined up behind the proposed changes.

In addition to such projections of increased efficiency, the proposed reforms would significantly decrease transportation costs for the United States. According to Royce, who spoke Wednesday in a conference of the House Committee on Foreign Affairs, 50 percent of the U.S. food aid budget is currently spent on shipping costs.

“You have to order the food in the Midwest, it gets put on a ship, it can go 7,000 miles to the other side of the world, put on to trucks, and then moved into the famine or emergency zone,” Andrew Natsios, a professor at Texas A&M University, testified during Wednesday’s discussions. “If the food is bought locally, you can avoid the 7,000-mile food chain.”

"Shipment devastated the Haitian rice farmers after the earthquake because we couldn't buy it locally."
-- Andrew Natsios

Throughout Wednesday’s Congressional discussions, experts highlighted the consequences of this food chain, particularly in war zones or emergency situations. According to Natsios, a regular strategy in a civil war is to starve the enemy by blowing up food trucks.

“The Syrian government is trying to starve the opposition into surrender,” he said. “The Sudanese government did the same thing in southern Sudan over the course of 22 years of civil war.”

Advocates add that the proposed reforms would have long-term benefits for both the U.S. and foreign economies.

“The future interest of U.S. agriculture is less in the provision of U.S. food aid and more in developing a thriving economy that can create new consumers for American productions,” said Dan Glickman, executive director of the Aspen Institute Congressional Program, an educational initiative for members of Congress.

The changes would allot a larger percent of the food aid budget as cash spent in local markets, which economists say would significantly stimulate local economies.

“Shipment devastated the Haitian rice farmers after the earthquake because we couldn’t buy it locally,” said Natsios. “But we couldn’t not give them food either, because they needed it.”

On Monday, the Senate overwhelmingly passed a massive, five-year bill that covers much of U.S. agriculture and food-related policy and known as the Farm Bill. The focus now shifts to the House of Representatives to fashion a similar bill, expected to be voted upon later this month.

For now, the Senate bill would reduce overall spending by about 24 billion dollars over 10 years. But that legislation will have to be reconciled with whatever comes out of the House, where the Farm Bill battles are expected to be far more bitter.

Currently, the Food Aid Reform Act is a separate bill, but many observers assume that it will probably be tied into the House Farm Bill eventually. At the moment, experts project it to have less than a seven percent chance of being enacted on its own.

“We don’t expect this to pass free-standing – it’d be great, but that is probably unlikely,” Blake Selzer, a senior policy advocate at CARE, a humanitarian organisation, told IPS.

Still, many U.S. lawmakers and aid experts are concerned as to how the United States would continue to receive public credit for locally procured assistance – an important consideration in any foreign assistance programme. During Wednesday’s discussion, several House representatives expressed such concerns.

“Nobody is talking about going to a cash-only system – not the White House, not the chairman,” Glickman said, emphasising that under the current proposal, only a portion of the aid budget would go to a cash system and the rest would be U.S. shipped commodities.

“I would not support going to a cash only system, I don’t care what country does it. That would be a mistake.”

Indeed, according to USAID, the U.S. government’s main foreign aid arm, such branding has been important, at least in certain situations. U.S. approval ratings in Indonesia, for instance, are said to have nearly doubled, from 37 to 66 percent, following a large delivery prominently branded as U.S. aid.

Natsios emphasised repeatedly that in emergency situations it is very clear where assistance is coming from. “No one would argue that we should only provide aid if we get credit for it,” he said.