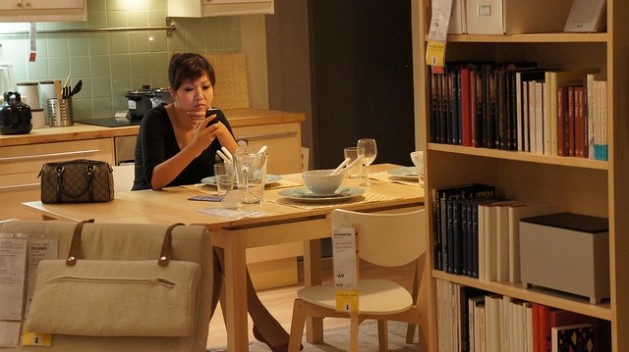 Working Singaporean women are forced to conform to strict gender roles, taking care of children and household chores on top of their 9-5 jobs. Credit: epSos.de/CC-BY-2.0

SINGAPORE, Jul 17 2013 (IPS) - The play opens with a man and his mother waiting impatiently at the dining table in the family home. A woman rushes in after a busy day at the office with takeaway dinner packets, followed by her son and daughter who walk in expecting their mother to serve them a meal.

The scene continues with the grandmother chastising her daughter-in-law for coming home late and failing to prepare the meal herself, a refrain quickly taken up by the husband. The young daughter is meanwhile pulled up for wearing a short skirt, though she is quick to retort that the grandmother is simply “old-fashioned”.

An undercurrent of tension that threatens to give way to violence runs through the play, which is exactly what the writers and producers intended.

‘Just a Bad Day’, a forum theatre piece designed to explore the struggles of ordinary Singaporean women against stereotyping and gender violence, is quickly making the rounds of this affluent Southeast Asian city-state, highlighting the hunger for dialogue around an issue that often gets swept under the rug.

As Director Li Xie told IPS, “Physical violence is very visible but subtle violence is hard to detect.” Yet it is exactly this latter form of violence that women in Singapore confront on a daily basis.

The 2013 Human Development Report, published annually by the United Nations Development Programme (UNDP), puts Singapore at 13th place in the gender development index, above Western countries such as the U.S., UK, Ireland and Austria, and fellow neighbours Japan, South Korea and Australia.

Over 71 percent of women in Singapore have at least a secondary education and 57 percent participate in the labour force.

With such an impressive track record, one would believe that women here enjoy a high social status, but the reality is very different.

Entering the labour force has been both a blessing and a curse, as women are now expected to play the dual role of working mother and traditional housewife, who must cook the family meal and attend to all the domestic chores after putting in long hours on the job.

“We wanted to address these gender stereotypes, prejudices and biases [because] that’s where change starts,” argues Kokila Annamalai, communications executive at the Association of Women for Action and Research (AWARE), the co-producer of the play.

She added that social conditioning of both men and women must be stopped at “an early stage” so as to prevent psychological violence in the future.

AWARE, the leading women’s lobby group in Singapore, has fought for over three decades for equal rights for women in the workplace and at home.

Now, the NGO is taking its campaign to a new level through the use of community forum theatre, a form that allows the audience to actively participate in the outcome of the play.

“Through this intimate performance, we hope to provoke thought and discussion on the less tangible forms of violence against women that continue to be a reality in Singapore,” Annamalai told IPS.

‘Just A Bad Day’, produced in collaboration with the community theatre company Drama Box, is a flagship project of the ‘We Can’ campaign, a global initiative involving 3.9 million people who have pledged not to “tolerate violence against women”.

As the 16th country to join the movement, Singapore has adopted the mantra “Change starts with me”, and hopes to reach 10,000 people by the end of the year.

A crucial tool in that plan is the performance piece, devised by a team of “change makers” who will spend the rest of this year taking the play to community centres, schools and universities around the country.

First staged on Jun. 26, the play was recently presented at a youth festival called Scape where over 100 youth between the ages of 16 and 25 attended the show and participated actively in formulating a new outcome.

One audience member intervened in the first scene and got into the role of the working mother-housewife by explaining to the grandmother that women today have to work to maintain a family’s standard of living.

The original actress had portrayed a subdued and frustrated character, but the young girl in the audience injected a more aggressive quality into the mother’s role, pushing the grandmother to take a different view of the situation.

Rachel Chung, who originally played the role of the mother, told IPS after the show that she herself has experienced the kind of psychological violence depicted in the scene.

“Violence in my life started with verbal tirades, insults and put-downs from my partner,” Chung said in a recent interview. “He then assaulted me with profanities. Soon, he started shoving me when I ‘stepped out of line’ and this escalated into more physical abuse like slapping and punching.”

Stressing that violence is not “always black and blue”, Chung insisted that the “damage to my morale and self worth caused by the emotional abuse was no less than the physical injuries.”

She pointed out that one in 10 women in Singapore have experienced psychological abuse, and surveys have shown that eight in 10 Singaporeans will not interfere in domestic disputes, even if they know that a friend, relative or neighbour is being abused.

Chung called the campaign a “movement to make change” and invited men and boys to join in, citing their support as crucial for success.

Lupin Tan, who acted as the father in ‘Just a Bad Day’, told IPS that he joined the cast because of a personal connection to the role, having been what he called a “male chauvinistic father”.

He was one among 70 people who responded to a Facebook post calling for volunteers. Twenty were eventually chosen to go through a month-long exercise with Drama Theatre and come up with three scenes that would then be incorporated into the final play.

“It was important for me to reach out to people with [similar] experiences, who are unaware of this type of violence towards women,” Tan told IPS.

According to Xie, the point of the play is to force audience members to ask themselves: “What would I have done?”

Provoking spontaneity and action is important in a society where many perceive calls for help as women “making mountains out of molehills.”

In fact, a survey of over 655 men, conducted by the Ngee Ann Polytechnic School of Business and Accountancy, found that 13 percent of respondents believe women who are raped “asked for it”, while 29 percent of men believe that most women make “false” claims of rape.

It is for this very reason that Annamalai believes theatre can be useful, since it offers a non-threatening opening to a conversation and “shows rather than tells” a way forward, to a more equitable society.