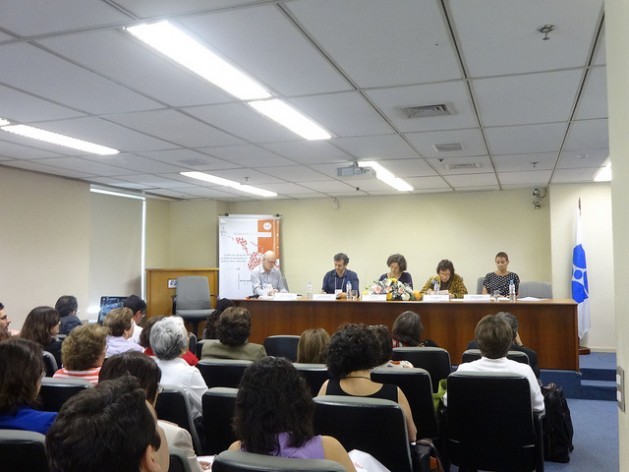 RIO DE JANEIRO, Jul 17 2013 (IPS) - Nearly 20 years after the landmark U.N. conference on population and development, the countries of Latin America have an opportunity to make headway with a new agenda on these issues, thanks to the favourable economic context that has made it possible to reduce social inequalities.

The situation in the region was debated at the preparatory meeting in Rio de Janeiro for the first session of the Regional Conference on Population and Development in Latin America and the Caribbean, to be held Aug. 12-15 in Montevideo under the auspices of two specialised United Nations agencies.

Demographers and government representatives from the region were convened by the Economic Commission for Latin America and the Caribbean (ECLAC) to a Jul. 15-17 meeting that took stock of pending challenges from the International Conference on Population and Development (ICPD), held in Cairo in September 1994, which approved a plan of action to 2014.

The current context of economic growth and improvements in income distribution opens an opportunity for progress in the elimination of socioeconomic imbalances and improvement in quality of life, says the basic document by the United Nations Population Fund (UNFPA).

Conference speaker Juan José Calvo, of the Uruguayan government’s population commission, agrees with this analysis of a Latin American population that over the last six decades has expanded from 167 million people to 596 million, according to 2010 figures.

“In the last 20 years we have seen extremely significant progress, in some cases giant strides, which does not mean that we do not still face big challenges, even in the same areas. In other words, we have lifted dozens upon dozens of Latin Americans out of poverty and extreme poverty, but that does not change the fact that it is still the main problem to be solved,” Calvo told IPS.

The ICPD programme of action recommended a set of interlinked quantitative goals, such as universal access to primary school education, with a special emphasis on girls; the promotion of health and reproductive rights, including family planning; the reduction of maternal and child mortality and morbidity rates; gender equality; and an increase in life expectancy.

In the framework of “sustainable development,” it took account of more general issues such as reduction of poverty and social, generational and ethnic inequalities.

In some countries these indicators improved, along with others that can help interrupt the cycle of inequality, like education. In Argentina, Chile and Uruguay, for instance, nearly all children and teens under 15 are in school, while on average in El Salvador, Guatemala, Honduras and Nicaragua, one-quarter of young people in that age range are out of the system, Calvo said.

Another stride forward was a rapid fall in fertility that began in the first half of the 20th century. Latin America and the Caribbean had some of the highest fertility rates in the world, at nearly six children per woman.

Four decades later, fertility in the region was below the world average of 2.9 children per woman, and in recent decades it has dropped to 2.17.

Since 1950, average life expectancy in Latin America and the Caribbean has increased by 23 years, to 75 years. During the same period, infant mortality plunged from 138 to 18 per 1,000 live births.

But these improvements are not evenly distributed among countries, regions or ethnic groups. “Latin America and the Caribbean remains the most unequal region on the planet, and that is probably its top priority challenge,” said Calvo.

“While we have made significant advances in most of the indicators that measure improvements in living conditions, there are still unacceptable gaps in sexual and reproductive health, poverty and education,” he added, referring, for example, to indigenous peoples.

Calvo said the basic problems could be traced back to the 1990s, when “the neoliberal governments that were predominant in the region gave up government planning as an instrument of public policies.”

At present, “several progressive governments have resumed planning, including demographic planning,” he said.

“Many have created social development ministries and institutes for young people and for women, for example, which are effective mechanisms for implementing more advanced regulatory frameworks,” he said.

However, not even these governments have been able to overcome internal conservative positions that hinder progress on issues like sexual and reproductive rights, regarded as “fundamental” by Brazilian demographer George Martine.

According to Elsa Bercó of Brazil, “fundamentalist” concepts blocked free discussion in Cairo of issues like sexual orientation, abortion and teenage pregnancy.

These issues “were not materialised in public policies or in the decisions of higher courts,” said Sonia Correa, the founder of the Brazilian women’s group SOS Corpo.

Martine told IPS that “In Cairo progress was made in terms of development, gender equity and reproductive rights, but not all of the agenda was discussed, and some touchier issues were left out of the debate for ideological reasons.”

He attributed this to “religious opposition, which is even capable of influencing governments whose own agenda is more progressive.”

Meanwhile, Magdalena Chu, the founder of the postgraduate course on Demography and Population at the Cayetano Heredia University in Peru, highlighted the region’s advances in sexual and reproductive rights.

“Nowadays there is more of a sense that people are free to plan their families, and to use this or that method of family planning,” she said. But she also blames conservative sectors for the fact that many governments have not been able to openly implement these policies.

Speakers at the meeting in Rio de Janeiro brought up other pending issues, like urbanisation processes and their consequences for the environment.

These are “inevitable” processes, but “there is a lack of policies on the part of administrators,” according to Martine.

“We have made advances on the road to development, but we still have a great deal to do,” Calvo summed up.