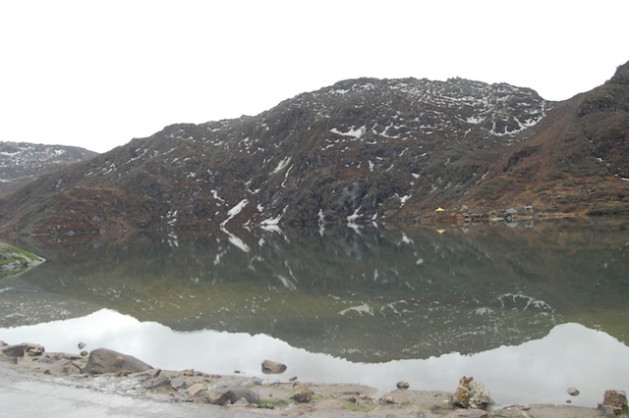 UTTARKASHI, India, Jul 27 2013 (IPS) - Over a month after flash floods in the Himalayan state of Uttarakhand in north India left 1,000 dead and 6,000 missing, the government has yet to release a full agricultural impact assessment, sparking fears about the extent of damage to the region’s farmland.

Questions remain as to how soon soil restoration efforts will fructify and when the farm economy, which accounted for just under 11 percent of the state’s 160-billion-dollar gross domestic product (GDP) in 2012-2013 will be restored to functionality.

Heavy flooding on Jun. 15-16, the result of torrential rains and glacial leaks in the Himalayas, wreaked havoc on Uttarakhand, as the headstreams of the holy River Ganga swelled and swept away roads, homes, scores of pilgrims, cattle and buildings.

With the government focusing its efforts almost entirely on an emergency rescue and relief operation coordinated by the armed forces (with over 42,000 rescues under its belt to date), the plight of farmers has been largely ignored.

Experts from the region say the summer crops have been washed out and the farms are in no shape to yield a winter harvest this year; the sowing season for rice, which coincides with the height of the monsoon (June to September) has been delayed as a result of heavy inundation of paddy fields caused by downpours and landslides.

Though agricultural fields are routinely inundated with the clay that runs down surrounding mountains during summer glacial melts and the annual monsoon, this latest calamity has created a disaster zone in what is frequently referred to as the “land of the gods”.

“It is possible that the top soil may have been altered for a considerably longer duration of time than expected,” Ram Kishan, regional emergency manager of South Asia for the UK-based NGO Christian Aid, told IPS.

This Himalayan state, irrigated naturally by perennial glacier-fed rivers, boasts a high degree of agricultural diversity. Rajma, or red kidney beans, and potatoes comprise the staple diet of the majority of Uttarakhand’s native population of 10 million people, according to the 2011 census.

Crops like rice, wheat, barley, millets, lentils, pulses, potatoes, fruits, vegetables, flowers, spices, herbs and mushrooms have been drowned by the floods, while debris from landslides has also compromised the grazing pastures of the state’s roughly 11.9 million heads of livestock, including cows, bullocks, buffaloes, sheep, goats, horses, pigs, hens, chickens and other birds like geese.

“Initial estimates suggest that 25 to 30 percent of cultivation has been affected,” said Kishan; this represents a huge chunk of the state’s average annual production of 8.2 million tonnes.

NGOs like Christian Aid fear that the resulting price rise in all essential commodities, like vegetables, fruits, milk, dairy products, cereals, lentils and pulses, in the near term will adversely affect the average farming family.

Experts have suggested that the government:
• Subsidise agriculturists’ losses with higher minimum support prices or procurement prices;
• Begin soil restoration, watershed management and afforestation efforts and take steps to clear encroachments in order to begin long-term recovery;
• Start removing the debris in tourist circuits;
• Conduct a ‘postmortem’ of the state government’s reaction (or lack thereof) to precise forecasts made by the Indian Meteorological Department;
• Brainstorm and implement employment generation schemes, harness local resources optimally to mitigate outward migration and strengthen the local economy to safeguard against future disasters or natural calamities; and
• Ensure that the reconstruction of tourist infrastructure conforms to the state’s safety code.

In total, 753,711 hectares of cultivated farmland have been either deluged or washed away completely by the Mandakini and Alakananda rivers, both of which spring from the Gomukh snout of the huge Gangotri glacier in the Himalayas.

Over 65 percent of Uttarakhand’s residents, most of them subsistence farmers with small landholdings of less than a single hectare per family, are dependent on agriculture, according to Aide et Action.

Farmers dependent on seasonal tourism to supplement their incomes during the monsoon months are particularly affected.

Uttarakhand is a popular destination for foreign tourists and local pilgrims alike: “Forty-seven million domestic tourists and (half a) million foreign tourists were expected in the current fiscal year”, according to Shekhar Ambati at Aide et Action. But the flash floods, he said, eroded this economic base.

The tourism industry is one of the largest employers in the region, hiring locals as porters, guides, drivers, naturalists and translators. Others rent out their mules, offering tourists rides on rocky terrain in order to earn their daily bread.

The tourist economy also supports local artisans and makers of traditional handicrafts, opens up jobs as caterers and cooks through the hospitality sector and enables families to establish small businesses like tea stalls, souvenir shops or grocery stores.

Ambati fears that the destruction of the “lifeline of religious tourism” will snowball, affecting the number of tourists arriving in the region and further endangering farmers’ incomes.

Quoting small business owners and vegetable sellers at the main market in the town of Rudraprayag, Eila Jafar of Care India told IPS that farmers are already starting to feel the crunch of scant agricultural yields.

“The number of daily wage labourers coming to the main market has reduced to a great extent,” Jafar told IPS.

Road conditions have deteriorated significantly since the floods: some roads were washed away altogether and others have been made impassable by debris, which is having an extremely “negative impact on the market and economy,” Jafar added.

Farmers who relied on the tourist infrastructure to sell their produce are among the worst affected.

“The state’s chamber of commerce and industry estimates that Uttarakhand has lost revenue earnings of over 20 billion dollars from its tourism sector alone in the current fiscal year on account of torrential rains that devastated the state,” says Ambati.

With tourism unlikely to recover for two to three years at least, the situation calls for “intervention” from the government to ensure that farmers have food and livelihood security in the short term.