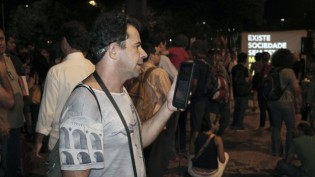 By Fabiana Frayssinet
The citizen journalists of Midia Ninja, who have covered the protests that broke out across Brazil in June right in the thick of things, are part of a new kind of reporting: one that is proud to be biased.

By Fabiana Frayssinet
The citizen journalists of Midia Ninja, who have covered the protests that broke out across Brazil in June right in the thick of things, are part of a new kind of reporting: one that is proud to be biased.

By an IPS Correspondent
The G-15 foreign ministers, meeting on the sidelines of the General Assembly last week, renewed their commitment for enhanced engagement and cooperation among themselves, as well as with the relevant Geneva-based institutions. Their primary focus was on newly emerging areas of cooperation in step with the evolving post-2015 development agenda.

By Carey L. Biron
As lawmakers here prepare to take up legislation that would green-light a U.S.-Mexico agreement on oil-and-gas drilling in the Gulf of Mexico, development and rights groups are urging them to reject a proposal that would exempt involved companies from new disclosure requirements.

By Joan Erakit
One of the fastest-growing Asian immigrant groups in the United States, Filipinos are perceived as the most likely to assimilate with ease.  That is, of course, if you’re looking from the outside in.

The Medicines Are Fake, the Illnesses Real

By Catherine Wilson
Reports of fraudulent medicines in the south-west Pacific island states of Solomon Islands and Papua New Guinea have drawn attention to the need for more public awareness of the lethal trade and its tragic consequences.

By Fabíola Ortiz
Amidst rumours that global warming has slowed over the past 15 years, the new report by the Intergovernmental Panel on Climate Change (IPCC) states that each of the last three decades has been warmer than any preceding decade since 1850.

By Stephen Leahy
Greenland will eventually truly become green as most of its massive ice sheet is destined to melt, the authoritative U.N. Intergovernmental Panel on Climate Change (IPCC) reported Friday.

By an IPS Correspondent
Speaking at the annual UNAOC ministerial meeting on “Global Harmony for Development and Prosperity”,  Nassir Abdulaziz Al-Nasser, the U.N.  High Representative for the Alliance of Civilizations said  that without global harmony, as enunciated in the U.N. charter, “the development and prosperity that our nations deserve will be difficult to achieve. “

By an IPS Correspondent
In Latin America, where marijuana is the most widely consumed illegal drug, there is basically no home-grown research into its effects and properties. But possible legalisation in Uruguay and the Mexican capital could open the door to new studies.

By Correspondents
Pink, green, blue, red. From a distance, the thousands of brightly coloured houses look like a painting. The observer can’t see the suffering and dangers threatening the residents of the Jalousie neighbourhood – problems that are being ignored by the government, which is spending six million dollars on a massive make-up job.
Next Page »
ADVERTISEMENT ADVERTISEMENT