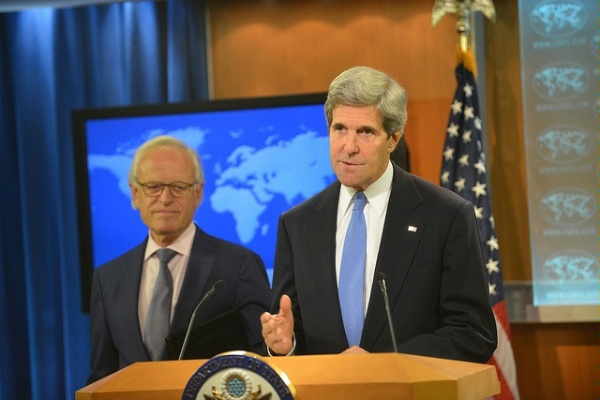 WASHINGTON, Oct 4 2013 (IPS) - Israeli and Palestinian negotiators returned to the negotiating table on Thursday, ready to put claims by the United States that it will engage more forcefully in the negotiating process to the test.

The talks, which paused for the meetings of the United Nations General Assembly, have been struggling amidst Palestinian complaints of Israeli foot-dragging and the lack of U.S. participation.

"The publics on both sides have hardened their positions in the last 20 years. So the selling of a deal is harder than it was." -- J Street's Jeremy Ben Ami

Yet for all the enthusiasm around the revived peace talks, there remains considerable doubt about the prospects for ultimate success.

Yousef Munayyer, executive director of the Jerusalem Fund, a non-profit organisation working to raise funds to aid the Palestinian people, believes it unlikely that a permanent agreement will be possible.

“Ideally, all parties would like a comprehensive agreement, except Israel wants one on their terms, the Palestinians want on their terms, and the U.S. wants something that can stick,” he told IPS.

“None of these goals are really in line now. Israeli and Palestinian positions are so far apart that the U.S. may want to save face with an interim agreement. It would be in Israel’s interest at very little cost to them but at a high cost to the Palestinians. And this would be a disaster.”

Yet some see hope as dovish lobbying groups are gaining more prominence in Washington. The moderate group J Street appears to have overcome attempts by more hawkish pro-Israel groups, such as the American-Israel Public Affairs Committee (AIPAC), to marginalise it.

This week, U.S. President Barack Obama dispatched his vice president, Joe Biden, to speak at J Street’s annual conference and rally its supporters behind the peace-making efforts of Secretary of State John Kerry.

“It’s become an accepted notion that there is not only one mass movement lobbying org in DC, which is AIPAC,” Ori Nir, spokesperson for Americans for Peace Now (APN) told IPS.

“What J Street can do now, having been around for five years, it can authentically and credibly claim that its positions [supporting robust negotiations for peace] represent the pro-Israel community much more authentically than the traditional leadership. That puts wind in the sails of the Obama administration.”

Indyk, a former ambassador to Israel and a top Middle East policymaker under former President Bill Clinton, believes there is a real chance for success in the current talks.

“We’ve agreed to intensify the talks, and the U.S. will increase its involvement,” Indyk said at the conference. “All the core issues are on the table and our common objective is a final status agreement, not an interim one.

“The parties have agreed to resolve all the issues in nine months,” he continued. “Both sides have negotiated for years. The outline of an agreement is clear. What is needed is leadership and political decisions.”

“I don’t see [Netanyahu] as having walked toward a realistic two-state solution,” Levy said. “From what I understand there is a refusal to present a map, not even of the borders of the settlement blocs. He wants to not remove any settlements and maintain an ongoing military presence…

“I fear that we may repeat some of the old mistakes: an over-emphasis on bilateral negotiations, lack of a frame of reference, and a fetishisation of process [over results].”

J Street’s president, Jeremy Ben Ami, laid out his vision for a two-state solution, emphasising that both sides would have to make sacrifices. On the Israeli side, this includes sharing Jerusalem and evacuating some settlements.

On the Palestinian side, it means accepting a de-militarised state, which many Palestinians see as a denial of their full sovereignty, and acknowledging that virtually no Palestinian refugees would return to Israel, a key Palestinian national aspiration.

“The two-state solution is the only solution for the Israeli people and the Palestinian people and the only way we can secure the future of the region for all their children,” Ben-Ami told his supporters.

Asked by IPS if he was concerned that the proposed solution might not prevail in referendums, which both the Israeli government and the Palestinian Authority have conditionally set as requirements for any final agreement, Ben-Ami said, “The publics on both sides have hardened their positions in the last 20 years. So the selling of a deal is harder than it was.

“I think the ultimate deal will involve sacrifices and compromises. I don’t know what they will be but they will be hard to sell and all of us will have a tough selling job to do and we have to be ready to do that.”

But Husam Zomlot, the executive deputy commissioner for international affairs of the Palestinian Authority, spoke passionately at the conference about the rights of Palestinian refugees.

Zomlot cushioned his point by indicating that his own father would not choose to physically return, suggesting that many Palestinian refugees would feel similarly. Still, this issue seems far from easily resolved.

As far as Palestinians are concerned the right of return is a human right,” Munayyer said. “In my view, human rights are not negotiable.”