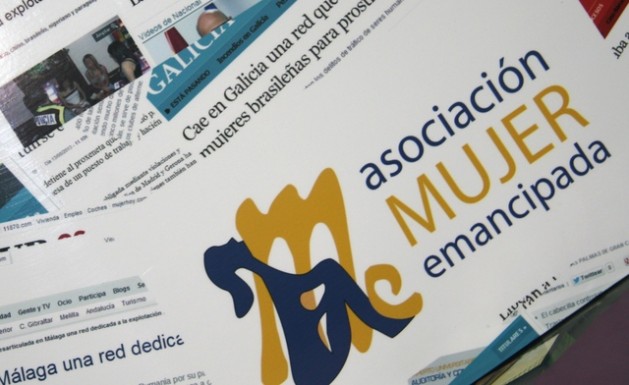 Collage of news reports on trafficking in the Spanish press, from Mujer Emancipada de Málaga, an NGO that provides assistance to women in need. Credit: Inés Benítez/IPS

MÁLAGA, Spain , Dec 23 2013 (IPS) - María came to Spain from Paraguay to work as a housekeeper in a hotel. But it was a false job promise, and she ended up in a nightclub, where she was forced to work as a prostitute.

One night she told a client the truth. Moved by her story, he started hiring her services day after day until he managed to find her a job somewhere else – and married her in the end.

It may sound like the plot of a movie with a happy ending, but it is a real case that happened recently, and was told to IPS by Felicia Carmen Marecos, a social worker with the general consulate of Paraguay in the southern Spanish city of Málaga.

It is just one of many stories of women who were trying to flee poverty and fell prey to human trafficking networks.

Most victims of trafficking for the purpose of sexual exploitation in Spain come from Brazil, China, Nigeria, Paraguay and Romania, according to the police, who estimate the number of victims in the country at 12,000 and the earnings of the sex trafficking rings in Spain at five million euros (six million dollars) a day.

María (not her real name) came to the country encouraged by her sister, who was already living in Madrid and was in on the scheme.

Women forced into prostitution tend to be drawn in with the help of family members, friends or acquaintances.

The young woman dared to speak out and file a complaint. But most victims do not do so “because they are coerced from their countries of origin,” Helena Maleno, an expert in migration and human trafficking with Colectivo Caminando Fronteras, an NGO that defends migrant rights, told IPS.

Many of the victims do not speak Spanish and are under threat, in debt, and unaware that help is available. They are also undocumented immigrants, and are afraid to go to the police.

Besides, “they don’t tend to recognise that they are victims,” said Paula Mandillo, a social worker with Mujer Emancipada, an association in Málaga that helped over one hundred women, mainly from Nigeria and Romania, in 2012.

The first European Commission report on human trafficking in Europe, published by Eurostat in April 2013, put the number of victims between 2008 and 2010 at 23,632, with the number growing by 18 percent over the three-year period. Of that total, 15 percent were children and adolescents.

In 2010, Spain had the second-highest number of victims of human trafficking in the European Union, after Italy, according to the study.

The organisations making up the Spanish Network Against Human Trafficking are calling for a comprehensive law against the crime, which would penalise trafficking in all its forms and not only sexual exploitation.

They are also demanding a human rights focus, arguing that an approach based on crime prevention, law enforcement and control of migration currently predominates.

One example of this was the case of an undocumented immigrant who was arrested and deported when she reported to the police in a coastal town in the province of Málaga that she had been raped, IPS was told by sources with the Guardia Civil immigrant support team (EDATI) in this southern Spanish province.

And a 24-year-old Romanian woman, who was fined by the police several times for working as a prostitute on the streets of Barcelona, committed suicide on Sept. 23. Only then was it discovered that since 2000 she had been a victim of a trafficking ring that sexually exploited some 200 women, and that the pimp was her own husband.

“To raise society’s awareness about what is happening, it has to be made clear that trafficking is not prostitution or irregular immigration, but that there are undocumented immigrants and people who are sexually exploited who are victims of trafficking,” Maleno said.

If the authorities in Spain find signs that an undocumented immigrant is a victim of trafficking, they must inform her that she has a 30-day grace period, when deportation procedures are suspended.

During that period, she receives advice and support from specialist organisations, and decides whether to report the crime and work with the police and judicial authorities in the investigation.

If she cooperates, she is eligible for a residency permit, under a 2009 reform of the law on aliens.

“It’s a problem for the prosecution of the crime to be based on whether or not the victim files a formal complaint. Even if they don’t report the crime, their human rights must be protected,” and that means not deporting them to their countries of origin, where their lives may be in danger, Maleno said.

Many Nigerian women who fall prey to trafficking networks have made a hazardous journey, involving walking across part of the Sahara desert, often pregnant or with children, to Morocco, where they take ‘pateras’ – small, flimsy boats used to traffic immigrants from North Africa – to the Spanish coast.

“The 30-day grace period is very short compared to what they have gone through,” said Maleno. In countries like Norway the period is six months, and NGOs participate in identifying victims, the Colectivo Caminando Fronteras activist pointed out.

Human trafficking was not classified as a crime in Spain’s penal code until December 2010. It is now punishable by sentences of five to 10 years in prison.

In the four cases that since then have resulted in firm convictions, 10 perpetrators were found guilty, Marta González, who heads Proyecto Esperanza of the Congregación de Religiosas Adoratrices, an order of Catholic nuns, told IPS.

According to Maleno, there is “an extremely big problem” in Spain involving victims of trafficking for sexual purposes from Romania, because they are legal immigrants, since Romania is an EU member.

For that reason, “they don’t enter into the circuit of protection established by the protocol against trafficking,” she said, adding that another problem is how frequently they are moved around the country and Europe as a whole.

The sex trafficking rings often use babies, whether to help women from sub-Saharan Africa get into Spain or to coerce them into forced prostitution, she said.

Until this year, when pateras landed on the coast, the authorities did not identify the babies. But now they have started to take their fingerprints, and are increasingly carrying out DNA tests on women and children at border posts, to verify that they are related, Maleno said.

In September, the government granted asylum for the first time to a woman who was a victim of a sexual exploitation network – a Nigerian mother of a three-year-old girl, who arrived by patera in late 2010 and decided to report and fight against the trafficking ring.