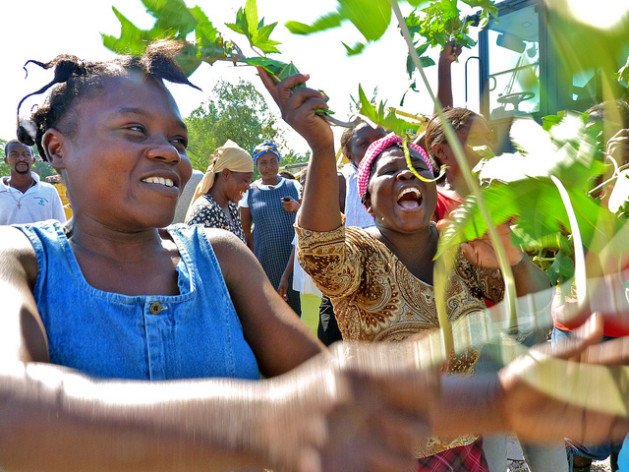 WASHINGTON, Dec 6 2013 (IPS) - The U.S. Congress is being urged to pass “urgent” legislation that would make issues of violence against women and girls a key focus in all U.S. diplomatic efforts.

The last such proposal, in 2010, was voted down on conservative concerns. But on Thursday lawmakers, activists and development workers kicked off a new campaign to push through pending legislation that would require diplomats to address issues related to violence against women when dealing with their counterparts around the world, in addition to altering how the United States allocates its development funding.

"If we say it is important for governments to make certain changes before they can receive full funding, our colleague countries will adopt similar polices.” -- Ruth Messinger

A bipartisan group of lawmakers introduced the bill, the International Violence Against Women Act (IVAWA), in the U.S. House of Representatives late last month. The legislation would place the United States in a global leadership position on violence against women, for the first time bringing together U.S. efforts on the issue at a global level.

“We strongly believe that this law would send a signal … that ending violence against women is a permanent goal for the world,” Wangechi Wachira, executive director of the Centre for Rights Education and Awareness in Nairobi, told journalists Thursday.

“This act will help organisations that do most of this work at the community level. It also means that Americans will be … focusing on issues very dear to us – issues of our mothers, daughters, sisters, grandmothers, all around the world.”

Supporters say the law’s passage would be felt by grassroots groups such as Wachira’s, as well as in the hallways of governments in both donor countries and developing nations.

“In many of the countries where we work, there is no legislation of any sort like this, despite immense problems of violence against women and no place for victims of any kind to bring their cases forward,” Ruth Messinger, president of American Jewish World Service (AJWS), an international development and rights group, told IPS.

“The United States is the largest donor compared to other Western nations in terms of the funding it gives, so that makes it particularly important for the U.S. to target aid to sensitive issues. If we say it is important for governments to make certain changes before they can receive full funding, our colleague countries will adopt similar polices.”

Around the world, rates of violence against women and girls remain astoundingly high. Statistically, one in three women will be abused, beaten or raped during her lifetime, while up to 70 percent of women in some countries are thought to experience some form of abuse.

For many, the experience begins very young. Despite child marriage being widely outlawed, some 10 million girls are still estimated to enter into early or forced marriage each year.

Messinger suggests that, even as a mere proposal, IVAWA will be able to embolden some grassroots groups working on women’s rights issues.

“In many of these places there may a law on the books that suggests equality for women and specifically addresses such violence, but in too many cases that law isn’t known about or isn’t enforced,” she says.

“In many cases, grassroots activists don’t know enough or don’t have the resources to move the issue forward … knowing that a bill like this is before the U.S. Congress and that it may influence how the United States gives out its funding will make a difference for activists on the ground in getting their government to take more steps to address the problems.”

The new discussion around IVAWA comes as the administration of President Barack Obama has substantially stepped up its own institutional commitments to women’s global security.

Indeed, IVAWA is seen as a central requirement in terms of actually implementing many of the goals set out in the national strategy.

“President Obama has shown extraordinary leadership on this issue, but we can do more – we need to institutionalise a comprehensive approach,” Jan Schakowsky, a member of the House of Representatives and a primary author of the IVAWA proposal, told journalists Thursday.

“This act would require the implementation of a comprehensive U.S. strategy to prevent and respond to violence internationally, including rule-of-law reforms, civil and criminal protections, new educational opportunities, and the promotion of economic opportunities for women.”

IVAWA was originally proposed in 2007 but has since failed repeatedly to receive the necessary approval, due exclusively to concerns on the part of conservative lawmakers. Likewise, passage of similar domestic legislation passed last year only by a slim margin, causing contentious rifts among Republicans.

Last month, Schakowsky told the media that Republicans “are hesitant about seeing … health and women in the same sentence – they’re concerned that abortion is somehow involved, which it is not.”

Yet Schakowsky and other supporters are more optimistic about the ability of the new proposal – which has been tweaked around Republican concerns – to draw broad bipartisan support. For one, the IVAWA proposal wouldn’t require any additional federal funding.

In addition, a spate of high-profile stories, including the series of atrocious rape cases in India, has brought unique focus to the issue of women’s abuse over the past year. Such accounts have mobilised an unusual level of public outrage across the globe, including here in the United States.

Schakowsky is also urging conservatives to look at the issue of violence against women not just from a humanitarian perspective but also as an important security concern, including for the United States.

“The most dangerous places to be a woman are also some of the most unstable,” she said Thursday. “Securing women’s rights strengthens entire communities and takes a critical step towards promoting global stability.”

Supporters are now stepping up pressure on the U.S. Senate to draft companion legislation, which they hope will be voted upon by both houses after the New Year.