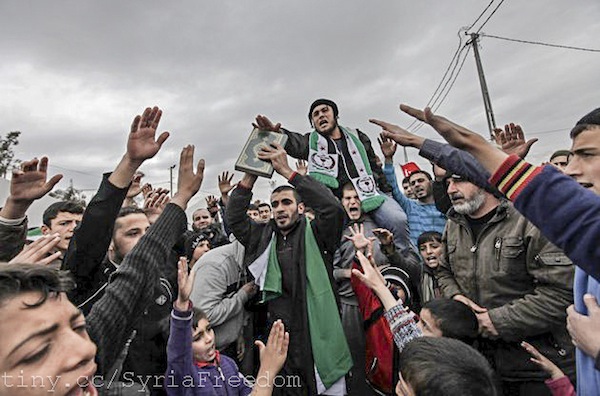 WASHINGTON, Dec 20 2013 (IPS) - Three months after averting a military strike against Syria with a last-minute deal to deprive it of its chemical weapons arsenal, U.S. policy toward the world’s most violent conflict appears increasingly at sea.

The weakening of Washington’s favoured rebel faction, dramatically illustrated earlier this month by the Saudi-backed Islamic Front’s takeover of the main headquarters and warehouses of the Free Syrian Army (FSA) along the Turkish border, has deprived it of a viable secular force in the armed struggle against the government of Syrian President Bashar al-Assad.

At the same time, U.S. efforts to persuade the newly formed Front, whose factions have worked closely with Al-Qaeda’s affiliates in Syria, even as they deny any such association, to return the purloined equipment to the FSA, let alone take part in the Geneva II peace talks scheduled for Jan. 22, 2014 with the government, appear to have been rebuffed.

“The Islamic Front has refused to sit with us, without giving any reason,” Washington’s special envoy on Syria, Robert Ford, said in an interview with al-Arabiya television earlier this week.

"America is paralysed...because they can't support Assad, but they won't support these radical Islamists either."
-- Joshua Landis

The result, according to analysts here, is that the Jan. 22 conference, if it takes place at all, is unlikely to affect the situation on the ground where the war consists increasingly of two extremes, neither one acceptable to the United States or its western allies.

“What’s really significant about this past year is that any pretence that there are important moderate, secular or liberal forces fighting in Syria has really been swept away,” Joshua Landis, a Syria expert at the University of Oklahoma, told IPS. “What you’re left with are radical forces: those behind Assad and those behind Islamist and jihadist groups.”

“America is paralysed, as well as most of the West, because they can’t support Assad, but they won’t support these radical Islamists either,” according to Landis, whose blog, Syria Comment, has an influential readership here.

That paralysis – as well as a civil war that most analysts believe remains stalemated – is of growing concern here. At least 125,000 people are believed to have been killed over the last two-and-a-half years, while 6.5 million, or a third of the population, are internally displaced.

Another 2.3 million have fled the country to neighbouring countries that are mostly ill-equipped to take them because of the demand on infrastructure and, in the cases of Lebanon and Jordan, the impact on political stability. Of the request for 13 billion dollars in humanitarian aid submitted for 2014 by the U.N.’s top relief coordinator, half is earmarked for Syrians.

In a survey of 1,200 U.S. government officials, academics and other experts released Thursday, the Council on Foreign Relation’s Centre for Preventive Action rated the spillover effects of the Syrian civil war, along with the increased violence in Afghanistan, at the top of 30 possible conflicts that are most likely to escalate and affect key U.S. interests in 2014.

In the past year, the conflict in Syria has contributed to a sharp surge in sectarian violence in neighbouring Iraq, while the influx of predominantly Sunni refugees and the deployment of some Hezbollah units to Syria have exacerbated sectarian tensions in Lebanon.

The Obama administration immediately suspended its non-humanitarian assistance to rebel groups after the Islamic Front took control of the FSA facilities. Washington has continued its humanitarian aid, which now exceeds 1.3 billion dollars since the crisis began.

While neo-conservatives and other strongly anti-Assad voices here still insist the administration should do more to aid secular factions on the ground, including with airstrikes against key government weapon systems, the notion that the alternative to Assad will likely be worse is gaining traction here.

Last week, the highly regarded former U.S. ambassador to Iraq and Afghanistan, Ryan Crocker, told the New York Times that it was time “to start talking to the Assad regime again. As bad as he is, he is not as bad as the jihadis who should take over in his absence.”

Similarly, former CIA director Michael Hayden suggested recently that living with Assad might be “the best …[of the] very ugly possible outcomes.”

Most analysts here, like the administration, argue that neither side is strong enough to defeat the other militarily. But the main foreign sponsors of the two sides – Russia and Iran on Assad’s side, and Saudi Arabia and other Gulf states on the other – still believe their side will prevail, according to these analysts.

“The Americans have to accept that Assad’s not going and that we’re going to have to deal with him,” according to Landis.

“Everybody has to compromise in a serious way – to stop sending in weapons and money that fuel the fighting and to do it together, especially Iran and Saudi Arabia,” he added.

While the recent nuclear deal between Iran and the P5+1 has opened the possibility of some rapprochement between Washington and Tehran on regional issues, prioritising the nuclear issue has crowded out discussion of Syria.

Iran has said it wants to attend Geneva II, but it insists it will not do so under the precondition that it explicitly endorse the creation of a transitional government whose composition would be decided by agreement between the Assad regime and the opposition.

The precondition was established at the first Geneva conference held last year and was insisted on by the Saudis, who, it is widely believed here, are responsible for the Islamic Front’s refusal so far to attend the talks.

Washington’s deference to the Saudis, whose complaints against both Obama’s nuclear negotiations with Iran and his failure to follow through on threats to attack Syria in September have become deafening recently, has contributed to the impression of paralysis in U.S. policy.

“If ever there was a time when the Saudis deserved criticism, it would be now,” according to Tony Jones, a Gulf expert at Rutgers University. “Instead, we have [Secretary of Defence Chuck] Hagel going to Manama and offering up the standard view to ameliorate Saudi anxieties and Ford’s reaching out to the Islamic Front.”

“Saudi Arabia wants to win in Syria, while the administration says it is open to a broader range of options. But it appears that maintaining a strong relationship with the Saudis…is more important to the Americans than resolving the Syrian crisis in a way that might alienate them.”

The United States, according to Jones, should make it clear that it is “trying to prevent a further escalation of the conflict, and the only option would be for the Saudis to join it and as many other actors in Syria, including the Iranians, as are willing to participate in Geneva.”