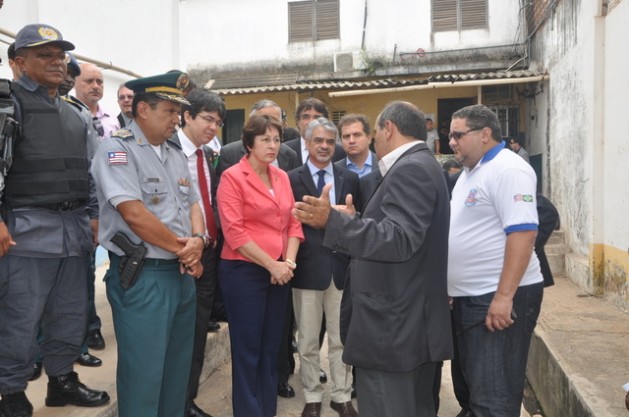 The Senate Human Rights Commission during its restricted visit to Pedrinhas on Jan. 13. Credit: Courtesy of the Ana Rita Senator Office.

RIO DE JANEIRO, Jan 28 2014 (IPS) - Nearly every day, violence breaks out in a Brazilian prison. In January the focus has been on the northeastern state of Maranhão, where orders issued from behind bars wreaked havoc in the streets of its capital city, illustrating the scope of national prison anarchy.

Even though public opinion is hardened to crime reports from Brazil’s 1,478 prisons, where 218 inmates were killed in 2013, people are shocked by what is happening in the Pedrinhas Penitentiary Complex in the city of São Luis, the state capital.

Several riots and mutinies have broken out during January in this prison, with a death toll of three inmates so far, and another fatality Monday Jan. 27 in a nearby prison. All the episodes of violence have been expressions of rejection of the presence of military police within the prison and the transfer of certain prisoners to maximum security facilities since Jan. 20.

It all began on the night of Jan. 3, when imprisoned gang leaders ordered their followers on the outside to burn buses and attack police stations in the city, causing the death of a girl who sustained burns on 95 percent of her body, and injuring five other people.

On Jan. 7, a gruesome video filmed in Pedrinhas by inmates, showing the corpses of three rival gang members decapitated during another mutiny on Dec. 17, shocked the country when it was disseminated by the newspaper Folha de São Paulo, and galvanised regional and national authorities into action.

The crisis in Pedrinhas reflects the fragility of the Brazilian prison system, Mário Macieira, the president of the Maranhão chapter of the Brazilian Bar Association (OAB), told IPS. In his view the country’s prison crisis, far from improving, is becoming more acute.

“There is a constant repetition of the same picture in the Brazilian prison situation: overpopulation, appalling hygienic conditions and lack of food security. Unfortunately, the collapse of this system is no novelty. But the crisis has acquired the dimensions of a tragedy,” he said.

All the units in Pedrinha, except for the women’s prison, are overcrowded and are the scenes of violence between rival gangs, whose leaders provoke frequent riots. The prison was built for 1,700 prisoners but houses 2,500.

Brazil, the country with the fifth largest population in the world at nearly 200 million people, is the fourth country for the number of people deprived of liberty, 550,000, behind the United States, China and Russia. In terms of prison overcrowding it is placed 32nd, with an overpopulation of 172 percent, according to United Nations figures.

According to the OAB, 218 prisoners were killed in the country in 2013, 60 of them in Maranhão. Twenty-eight percent of the deaths occurred in Pedrinhas, Macieira said.

Since Jan. 3, the military police and national security forces have been regaining control of Pedrinhas, which is under de facto domination by bosses of criminal gangs on the inside, who use their mobile phones to direct many criminal activities on the outside as well.

In late 2013 the Inter-American Commission on Human Rights (IACHR) asked the Brazilian government to take immediate measures to prevent persistent abuses and unsanitary conditions in Pedrinhas and another prison in the south of the country.

The IACHR request was in response to the complaint lodged in October by the OAB and the Maranhão Human Rights Association about human rights violations in Pedrinhas and other prisons in the state.

Nationwide there is a shortage of 211,000 prison places, but in Maranhão the deficit is only 2,000 beds, in a scenario in which Pedrinhas has the worst overcrowding problem.

According to the Brazil’s 2013 Annual Report on Public Security, the states which most need to expand their prisons are São Paulo (which needs 88,500 additional prison places), Minas Gerais (18,500) and Pernambuco (17,900).

In Macieira’s view, the pacification of prisons in Maranhão requires new prisons to be opened urgently, but the regional authorities have said new units will only become available at the end of 2014.

Rodrigo de Azevedo, a sociologist, told IPS that the prisons crisis has worsened in the last 20 years because of increased institutional violence, overpopulation and criminal gangs operating within prison facilities.

“Brazil’s penal system targets the poor and the working classes,” he complained. Moreover, the prison system culture “encourages violent situations like those that have occurred in Maranhão or other states at other times,” he said.

Azevedo coordinates a research group on public policies for security and the administration of criminal justice at the Pontificia Universidade Católica in Rio Grande do Sul.

According to his analysis, the war on drugs and excessive use of provisional internment on remand, while criminal suspects are awaiting trial, contribute to increasing incarceration rates in Brazil.

Around 40 percent of Brazilian prisoners have not been sentenced, and in some states, like Maranhão, 70 percent of the prison population is interned on remand.

Another problem, Azevedo said, is that a large part of Brazilian society feels that criminals – or suspected criminals if they have not yet been tried – deserve to suffer vindictive torments over and above the punishment imposed by law. Consequently, abuses of prisoners’ human rights arouse few outcries.

Azevedo pointed out that aggression between inmates is frequent in Brazilian prisons and may also involve relatives, who are victims of extorsion and physical violence.

“There are denunciations that women (visitors) have been forced to have sex with leaders (of prisoners’ gangs) under threat of violence against their imprisoned relatives. This goes far beyond any legal punishment,” he said.

Azevedo is convinced that only a thorough reform of the Brazilian prison system will bring about positive changes in prison policy.

“If we want to prevent crime in Brazil and reduce violence, the issue of prisons must be addressed. What is happening in the prisons is reflected in urban violence,” he said.

But in spite of recurring alarms about mutinies and massacres among inmates, experts say that political will and social sensibility are lacking to tackle the drama of prisons in this emerging power.