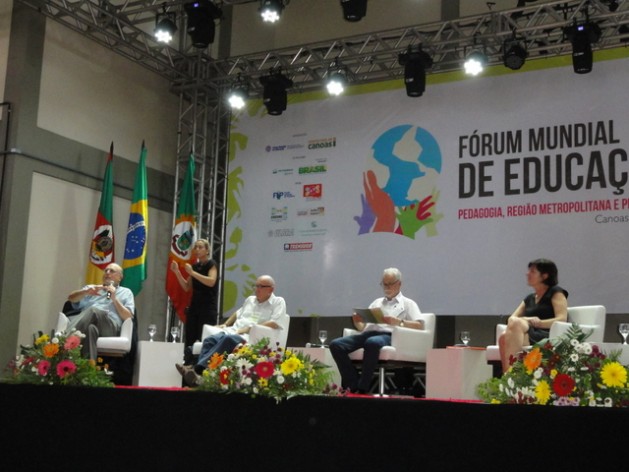 Participants in a panel on “Pedagogy, territories and resistance” at the World Education Forum in the Brazilian city of Canoas. Credit: Clarinha Glock/IPS

CANOAS, Brazil, Jan 24 2014 (IPS) - The challenges of the digital age call for schools to develop an alternative model of education, with teachers who incorporate new technology and employ a more critical pedagogy, participants said at the Fórum Mundial de Educaçao (World Education Forum) in this southern Brazilian city.

Guadalupe Jover, a Spanish education expert, told IPS that information and communication technologies (ICT) must be used as a tool for building collective knowledge through pedagogical renewal, and not to perpetuate the worst aspects of the prevailing educational system.

“We are talking here about the offensive strategies of the markets aimed at those who want to be involved in education, that is, sales through ICT,” said Jover, the coordinator of Spain’s Platform of Citizens for Public Schools in Spain, at the forum held Jan. 21-23 in Canoas, 19 km from Porto Alegre, the state capital of Rio Grande do Sul.

Porto Alegre was the cradle of the World Social Forum, an alternative movement which first met in 2001 under the slogan “Another World Is Possible.” Thousands of social organisations and movements from all over the world participate in its meetings, which are held in different regions of the developing South.

Jover was a panellist at the meeting on “Pedagogy, Territories and Resistance,” which discussed the problems posed by present-day curricula and the prevailing neoliberal concept that students should be trained to satisfy the needs of the market.

Jaume Martínez Bonafé of the University of Valencia, Spain, told IPS that “pedagogy continues to be autistic, obsolete, because previously the whole world was explained in classrooms, whereas now the focus is on the major commercial hubs.”

His concern, he said, is that ICT “will only change the tools without altering educational content.”

According to educators from different regions, ideally curricula should contribute to the growth of persons and their emancipation, as proposed by Brazilian philosopher Paulo Freire (1921-1997), one of the most innovative educational theorists of the 20th century, who did for education what Liberation Theology did for the Catholic Church.

His influential ideas heralded alternative education, through unorthodox formulas of learning based on freedom, and through his concern for promoting equality through education and increasing access to schooling for the oppressed.

Two Argentine educators inspired by Freire, Carla Azul Cassineiro and Laura Mombelli, travelled a long distance from their country to participate in the forum. Cassineiro teaches physical education and and Mombelli accounting. They are both popular educators in La Cava, Argentina’s second largest shanty town, in Buenos Aires.

Their students have access to the digital world, but many of their families see their devices and want them to buy food and get jobs, creating conflict and violence, they told IPS.

Cassineiro said the government Universal Child Allowance programme, which over the past five years has paid Argentine families with incomes of less than the minimum wage 31 dollars a month for each child, on condition that they attend school, has “helped integration and social containment.”

“This accentuates every kind of inequality, especially in relation to technology, which is only available in the cities,” she said. This hinders what ought to be a priority in education, that is, “for all children to have the same rights, no matter where they live.”

“Needs and demands are growing constantly,” said the Cape Verde education ministry official. “In some countries there may be one or two politicians who want to change the situation, but I think only radical social movements can bring about changes, or at least concessions, in education.”

Moacir Gadotti, the head of the Paulo Freire Institute, said that “schools need to discuss the kind of country they want, the kind of neighbourhood they want; there must be no fear of being free.”

He talked about the new Brazilian phenomenon of “rolezinhos”, in which large groups of young people from disadvantaged or peripheral areas occupy leisure spaces, especially shopping malls, after some of them, mostly Afro-Brazilian and poor, were expelled from one of these malls in São Paulo in late 2013.

“These young people have aspirations, they want to participate in the new Brazil,” Gadotti said. “Young people are connected to the social networks and this is something that politicians often do not understand or pay attention to.”

Popular educator Alberto Croce, the founder and president of Fundación SES in Argentina which promotes social inclusion of young people with limited resources, believes that the “rolezinhos” are a way of defying the system, connecting the movement with protests against educational and social exclusion in countries like Chile or Colombia.

Croce said that it is true that poor people are now better off in Latin America, but it is also true that inequality has increased in this region, the most unequal in the world.

The differences between educational models in big city schools and those in the poor suburbs is, in a way, a reflection of the contradictions of that inequality, he said.

The general run of schools prioritise the neoliberal model of preparing students for the labour market, but in the shanty towns and poorer districts there is resistance to this model because it discriminates against them and makes them invisible.

“One of the keys to education is respect for diversity. When education values cultural differences, integrates and incorporates them, then we can talk of quality education,” Croce said.

“Digital inclusion is a phenomenon that is present” in society, he said. Previously, young people wanted fashionable shoes, “but now they want to buy cell phones; there has definitely been a change, because access to technology is valued.”

In his view, young people have chosen mobile phones, the most personal device, to access ICT. “Inclusion is limited, but it has without doubt created a transformation,” Croce said.

It is a transformation that education cannot turn its back on, said participants at the Canoas forum, in debates on topics such as “Education as a human right,” “Education, environment and sustainability,” “Education in the emerging paradigm,” and “Education, diversity and inclusion.”