Nowhere to Come In From the Cold 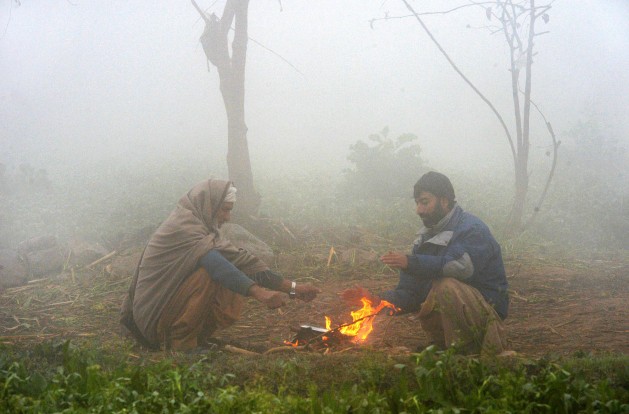 Refugees fleeing the Taliban and military operations struggle to cook a hot meal and keep away the cold. Credit: Ashfaq Yusufzai/IPS.

PESHAWAR, Pakistan, Jan 30 2014 (IPS) - As the temperature dips to zero degrees Celsius, a chill has set into the lives of people like 44-year-old Rasool Khan at the Jalozai camp for internally displaced persons (IDPs) in Pakistan. Huddled in tiny tents, with just a plastic sheet over their heads and no heat, they pass sleepless nights in the bitter cold.

“My two children are suffering from chest disease,” Khan, who lives at the camp with his 10 relatives, tells IPS. “We were already surrounded by so many problems, but the frosty weather has made things precarious.”

“There is no hope of medical assistance. Our only hope is that the weather will get warmer."

The sprawling Jalozai camp near Peshawar in Khyber Pakhtunkhwa province is home to displaced people from the adjoining Federally Administered Tribal Areas (FATA) in the north of Pakistan.

“Children and the elderly are falling sick,” says Khan, who left his home in Khyber Agency in FATA in August 2012. “We stay in worn-out tents which cannot protect us from the chill,” says the daily labourer.

The government launched a military operation against the Taliban in Khyber Agency in April 2012. Around 200,000 residents fled and took refuge in Jalozai camp.

The camp hosts 12,580 families, or 60,765 people. As if leaving their homes and hearths behind were not enough, winter is now making life miserable. Doctors say 90 percent of people at the camp are suffering from cold-related illnesses such as chest congestion, sore throat and fever.

“Their continuous exposure to dry and frosty weather coupled with the absence of gas and firewood for heating has left them at the mercy of the unrelenting cold. The icy water isn’t usable at all,” Dr Samiullah Khan says.

Women and children are the worst hit, he says.

The weather became harsher with the advent of the New Year. On the coldest days of the season, Jan. 11 and 12, the mercury dipped to minus two. Tents covered with plastic sheets could hardly be expected to offer protection against such biting cold.

The cold lowers people’s immunity, making them vulnerable to disease.

“The displaced population does not have adequate protection,” says Ali Akbar, who landed in Jalozai after the military began operations action against the Taliban in his native Bajaur Agency in 2008.

The camp hosts 2,351 families from Bajaur Agency, one of the seven agencies of FATA.

The National Disaster Management Committee says 2.1 million people left their homes due to violence by the Taliban and subsequent military operations in FATA. They have been living in camps or rented houses in Khyber Pakhtunkhwa province of northern Pakistan.

Ghufrana Bibi from South Waziristan Agency, who came to the camp two years ago, says all seven of her children have taken ill.

“They have fever. We lack blankets and warm clothes, and there is no electricity,” says Bibi, 52.

Bibi says she lost her husband during shelling in 2011, and her children were too small to work. “We are dependent on the meagre health facilities at camp because we cannot afford private treatment.”

For most, relief will only come when the winter recedes.

“There is no hope of medical assistance. Our only hope is that the weather will get warmer,” says Abdul Wadood, who has been at the camp since 2011. Wadood, 55, says people flock to the camp’s doctors every morning.

“People come to our hospital in droves because of the severe cold. We are prescribing medicines and asking them to stay warm, but they simply don’t have the facilities,” says Dr Abdul Malik who works at the district headquarters hospital in Dera Ismail Khan.

Camp residents say they desperately want the militancy to end so they can return to their ancestral villages.

“The only way to end our sufferings is repatriation to our villages. We need peace to go back as soon as possible,” Shafique Afridi, who lives at the Jalozai camp, tells IPS.

Shafique, 54, who was a shopkeeper in Khyber Agency, says he used to have a mud hut, but at least it protected his family from the cold. “Here we have nothing. We face winter and summer without electricity. In the village we would use firewood to keep warm, but here we cannot do that.”

Camp official Faisal Khan says they had distributed winter kits. “To each family, we gave five blankets, two quilts and five sleeping mats.” But, he admits, it was simply not enough.