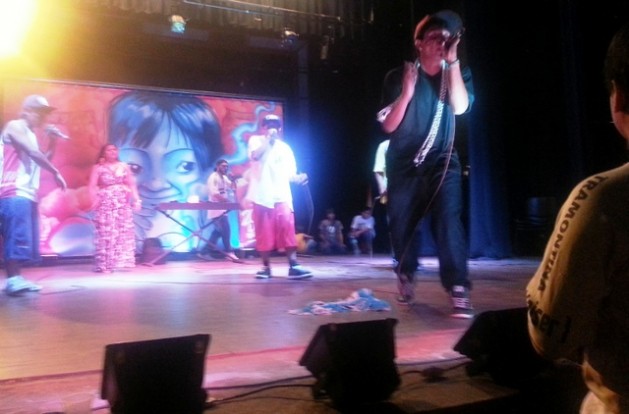 ASUNCIÓN, Jan 7 2014 (IPS) - The Sawhoyamaxa indigenous community in Paraguay have spent over 20 years fighting to get back their land, which they were pushed off by cattle ranchers.

They started the new year by collecting signatures to press Congress to pass a bill that would expropriate their ancestral territory from ranchers, in order for the state to comply with a 2006 ruling by the Inter-American Court of Justice ordering the restitution of their land.

“More than 20 years after being expelled from our ancestral land and living [in camps] along the side of the road, watching the cows occupy the place where we used to live, we decided to return because that land is ours,” the Sawhoyamaxa said in a message accompanying the petition drive.

“Che rohenói, eju orendive, aldeia unida, mostra a cara” (I am calling you, come with us, the people united, show your face) thousands of people sang at the “Todos con (everyone with the) Sawhoyamaxa” intercultural festival in Asunción in mid-December.

The event launched the start of their new crusade demanding enforcement of the Inter-American Court sentence, which ruled that they be given back their territory and that they be provided with basic services, such as medical care and clean water.

The “Che rehenói” chorus was heard over and over again in a mix of Guaraní (one of Paraguay’s two official languages, along with Spanish) and Portuguese, sung by the hip hop ban Brô MC’S, whose members belong to the Jaguapirú Bororó indigenous community from Brazil.

The goal set by the Sawhoyamaxa leaders is to gather 20,000 signatures, to pressure Congress to approve the expropriation of the land.

The epicentre of the community’s two-decade struggle is the Santa Elisa settlement, where the largest group of families are camped out along the side of the road 370 km north of Asunción en Paraguay’s semiarid Chaco region.

They are living “in extreme poverty, without any type of services, and waiting for the competent bodies to decide on the land claim they filed,” according to the 2006 Court ruling.

The Sawhoyamaxa form part of the Enxet linguistic family. There are 19 indigenous groups belonging to five language families in Paraguay, spread out in 762 communities mainly in the east of the country and the Chaco region, a vast dry forest area.

According to the 2012 census, 116,000 of Paraguay’s 6.7 million people – or 1.7 percent of the population – are indigenous, with over half of that group belonging to the Guaraní people. However, the overwhelming majority of the population is “mestizo” – people of mixed European (principally Spanish) and native (mainly Guaraní) descent.

The Sawhoyamaxa, who had no title deeds to the land where they had always lived, were displaced from their land, which was taken over by large cattle ranchers.

“They don’t want us to progress in our way of life,” the leader of the community, Carlos Cantero, told IPS. “We want the land to dedicate ourselves to our ancestral activities, like hunting and gathering in the forest.”

He was referring to the powerful cattle industry, which has successfully lobbied to block implementation of the 2006 binding sentence handed down by the Inter-American Court, an autonomous Organisation of American States (OAS) body.

Cantero said it was important for the situation to be resolved immediately because “there is still a little forest left on our land, some swamps and streams; but if the state does not take a stance on this soon, those reserves are going to disappear.”

Cattle ranchers have steadily advanced on Paraguay’s Chaco region, where in November 549 hectares a day were deforested, according to the local environmental organisation Guyra Paraguay.

The Chaco scrub forest and savannah grassland, which covers 60 percent of Paraguay but accounts for just eight percent of the population, makes for good cattle pasture.

Since the 19th century, the worst dispossession of indigenous people of their lands in this landlocked South American country occurred in the Chaco, especially after the 1932-1935 Chaco War with Bolivia, when the government sold off huge tracts of public land to private owners.

Today, less than three percent of the population owns 85 percent of Paraguay’s arable land, making this the Latin American country with the greatest concentration of land ownership.

The Sawhoyamaxa community is fighting for 14,404 hectares of land.

In a largely symbolic move, when the final deadline set by the Inter-American Court expired in March, the native community began to “recover” their land, setting up small camps on the property to which they are waiting to be awarded a collective title.

Their fight for the return of their ancestral lands dates back to the early 1990s. After exhausting all legal recourse available in Paraguay, they took the case to the Inter-American Human Rights Commission in 2001, which referred it to the Court.

The Sawhoyamaxa case is one of three in which the Inter-American Court has handed down rulings against the Paraguayan state in defence of the country’s native people. None of the resolutions has been fully complied with.

After the 2006 sentence, the government attempted to acquire the land in question in order to live up to the resolution and return the property to the native community. But it failed, due to the refusal by the rancher who holds title to the property, Heribert Roedel, whose 60,000-hectare estate includes the land claimed by the Sawhoyamaxa.

“The other route for expropriation is through the legislature, for which a bill was introduced, currently being studied in the Senate,” said Oscar Ayala, a lawyer with Tierraviva, which supports indigenous communities in Paraguay.

This local non-governmental organisation and Amnesty International Paraguay are the main civil society supporters of the cause of the Sawhoyamaxa.

The bill Congress is debating was presented by the government in August for the expropriation of the land, in order to fulfil the Inter-American Court order.

According to Ayala, there is a more positive environment than in the past. “The impression we have is that there is greater openness” for an eventual solution and for justice to be done in the case, he said.

On Dec. 18, the Senate commission for audit and oversight of state finances pronounced itself in favour of expropriation of the land.

“This first favourable ruling is a good indicator; these questions are always complex because caught up in the middle is that deeply rooted economistic view of land, but in this case those issues are no longer in debate,” Ayala said.

The bill will now go to the agrarian reform and finance commissions and then on to the Senate floor, before being sent to the lower house.

Some 120 families – around 600 people, half of them children and adolescents – are living in the Santa Elisa settlement.

The Court also ordered the state to provide food and healthcare assistance to the community. But while the situation in this respect has improved in the new settlements, much more needs to be done.

“We have a health promoter but no health post,” Cantero said. “The worst affected are the children, who are suffering from dehydration because of the bad quality of the water.”

The settlements receive clean water every month, but it is not enough, and they depend on rainwater, which is scarce in the semiarid Chaco.

To find a solution, Sawhoyamaxa men and women have been knocking on doors everywhere, showing people papers that describe the history of their community, their struggle, and the Court ruling, in search of support.

“We won’t stop until we are living on our land; our very survival depends on that,” Cantero said.