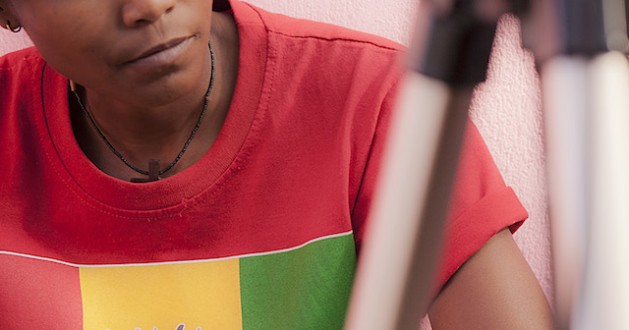 Thembela, a 26-year-old lesbian from Gugulethu, Cape Town, seldom leaves her home at night for fear of being the victim of “corrective rape”. Credit: Melany Bendix/IPS

CAPE TOWN, Feb 14 2014 (IPS) - “Every day I live in fear that I will be raped,” said Thembela*, one of thousands of lesbians across South Africa being terrorised by the scourge of “corrective rape”.

By living openly as a lesbian in Gugulethu township in the Western Cape, Thembela says she is at high risk of being assaulted by men intent on “correcting” her sexual orientation through rape.

“Lots of my friends have been raped for being lesbian. It’s not an unusual thing.” -- Thembela

“They do it because they hate what we are, because they feel threatened by us,” said the 26-year-old filmmaker for the local documentary television series “Street Talk”.

“I live with my partner and we live alone. Many guys in my neighbourhood know this and at any time they can come and kick down our door and rape us. They usually come in gangs and we would be powerless to stop them,” she told IPS.

“Lots of my friends have been raped for being lesbian. It’s not an unusual thing.”

Horrific reports of corrective rape are rife in South Africa, but just how many women and men have been raped and even murdered due to their sexual orientation is still unknown.

It is this dearth of data on hate crime that the country’s Department of Justice and Constitutional Development hopes to address with the “Policy Framework on Combating Hate Crimes, Hate Speech and Unfair Discrimination”.

The policy is the foundation for what will later become law and aims to “send a clear message that hate crimes will not be tolerated in South Africa,” according to Justice and Constitutional Development Deputy Minister John Jeffery.

He said the new law would create a separate criminal category for hate crimes.

Although it was created in direct response to the increase of hate crimes against lesbian, gay, bisexual, transgender and intersex (LGBTI) people in South Africa, the policy covers all forms of hate crimes, including xenophobic and racist attacks and hate speech.

During a briefing in late January, Jeffery said the policy framework had been “largely finalised” and would be released for public debate “shortly”.

Cobus Fourie of the South African Gay and Lesbian Alliance Against Defamation told IPS that having hate crimes as a separate category would shed light on how serious the issue was.

“Without a crime category that recognises the influence of homophobic prejudice in violence against LGBTI people, we have no hope of systematic data collection and monitoring of the problem,” she told IPS.

“What we currently know is only the tip of the iceberg.”

He pointed out that South Africa already had several progressive laws protecting the rights of LGBTI people, including the legalisation of same-sex marriage. However, in practice these laws do little to protect LGBTI people increasingly faced with violence and victimisation.

“It will take much more than a new piece of legislation to address hate crimes,” added Lynch, who said “being able to experience [constitutional] rights continues to be the main challenge for LGBTI people in South Africa.”

Sibusiso Kheswa, advocacy coordinator for Gender Dynamix, the first African organisation focusing solely on transgender rights, argued that it was pointless introducing new laws, however well intended, if the criminal justice system could not implement them effectively.

Kheswa told IPS the root of the problem was that the system was “not victim friendly”, starting with the South African Police Service (SAPS) – a victim’s first point of contact.

Lynch agreed and said her research had found that LGBTI survivors of assault and rape are “typically confronted with humiliation, dismissal and even direct victimisation by the police because of their sexual orientation and gender identity.”

Kheswa said this resulted in victims not reporting crimes out of “fear of secondary victimisation by the police and other players in the criminal justice system”.

“‘It would be a mistake to think that we can achieve better outcomes for survivors of LGBTI hate crimes within a broken criminal justice system,” warned Lynch. “We need structural transformation of the entire system, along with specific attention to LGBTI concerns.”

Fourie and de Vos both believe that education is key to reducing hate crime against LGBTI people in the long term.

“There should be far more vigorous education against prejudice, from basic school level right up to the government departments,” said de Vos. “But for that to happen you need political will.”

Johan Meyer, health officer for Johannesburg-based LGBTI advocacy group OUT, was upbeat that there was a good measure of political will behind the policy framework.

“There is always concern that the hate crime law might be like South Africa’s other progressive laws that are supposed to protect LGBTI people.

“But I do believe that in this case things are different, since there is real and committed involvement on national level from the Department of Justice and Constitutional Development, as well as from the SAPS and the National Prosecuting Authority,” he told IPS.

Back in Gugulethu where Thembela and her partner triple bolt their doors and seldom venture out at night for fear of being attacked, she too is hopeful that the fledgling law will one day allow her to live free of fear.

“If we had our own law to protect us, a law that really punishes these guys for raping us, it might make them think twice. And if they think twice, maybe they will stop and I can stop being scared all the time.”