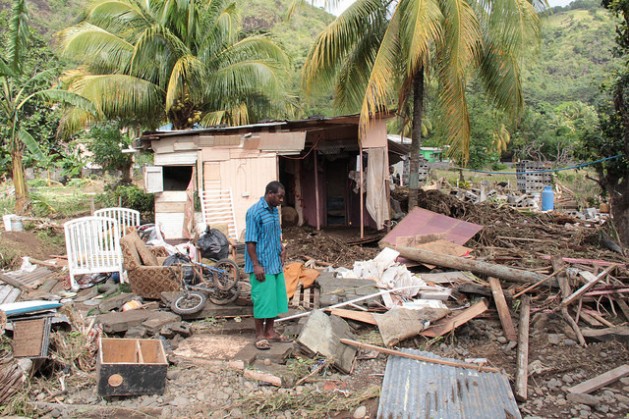 A man stands outside the ruins of a house in Buccament Bay, on St. Vincent’s southwestern coast, Dec. 26, 2013. Nine people were killed by Christmas flooding in St. Vincent and the damages estimated at millions of dollars. Credit: Peter Richards/IPS

KINGSTOWN, St. Vincent, Mar 13 2014 (IPS) - Dr. Ralph Gonsalves, the prime minister of St. Vincent and the Grenadines, says the promises of money by the “biggest polluters in the world” for small island developing states (SIDS) like his to adapt to climate change are a mostly a “mirage”.

But as chair of the 15-member Caribbean Community (CARICOM) grouping, Gonsalves will be playing a lead role in getting the region to coordinate a united front on climate finance.

"The big polluters, they make commitments of all sorts of monies but it is a mirage and the closer you get to it you realise it is not there, it recedes." -- CARICOM Chair Ralph Gonsalves

“We agreed on the establishment of a task force on climate change and small island developing states to provide guidance to Caribbean climate change negotiators, their ministers and political leaders in order to ensure the strategic positioning of the region in the negotiations,” he told IPS following the CARICOM summit that ended here on Tuesday.

Guyanese President Donald Ramotar, who made a presentation at CARICOM’s closed-door summit, told IPS that it was important for the leaders themselves to get involved in the negotiations “and to make our voices heard on this matter, because as you know we have been the least contributors to climate change, but we are among the first to feel the big effects.”

Ramotar said the tragedy that occurred when a slow moving low-level trough hit St. Vincent and the Grenadines, Dominica and St. Lucia on Christmas Eve last year, killing more than a dozen people and leaving damages estimated at more than 100 million dollars, “is just the latest reminder how vulnerable our region is”.

The task force must now “find areas where CARICOM can agree on”, he said.

“This is a critical decision by heads [of state] at a time when efforts are underway through the U.N. to have a global climate change agreement by the end of 2015,” he said.

“We need to ensure that as a region, our voices are being heard on this important issue, and not only from our technical people, but from the collective political leadership in the region,” Ramotar said, stressing the need for a globally binding agreement.

“We have to ensure that we push for a climate change agreement by 2015 which is ambitious in terms of emission reduction targets and providing climate financing,” he added.

The communiqué that followed the summit here “lamented the fact that much of the promised resources had not been forthcoming but emphasised the need for the Caribbean Community Climate Change Centre (CCCCC) to work with member states in order to have projects prepared to access financing when it did become available.”

Guyana, for example, has been playing a lead role with regards to climate change, and priority projects on adaptation are outlined within its Low Carbon Development Strategy (LCDS), which seeks to address the effects of climate change while simultaneously encouraging economic development.

Gonsalves told IPS that on the question of adaptation, there is a whole menu of initiatives which have been established through discussions, technical reports and the like. What is needed most now is the money to pay for them.

“It is a lot a lot of money that is required so that is why…we have to work in a coordinated manner at the relevant international fora to see whether we could identify those areas where the money is more easily available for us to touch,” he told IPS.

“You get governments, the big polluters, they make commitments of all sorts of monies but it is a mirage and the closer you get to it you realise it is not there, it recedes.

“That’s the real difficulty with this and this is why we have to work better, harder on this because this is an exegetical issue it affects the very existence of our countries,” Gonsalves said.

“Climate change is here, you saw in terms of the frequency of extreme weather events, those are some of the indicators that the climate is changing. But more importantly, people don’t realise that the sea level is rising at this time, at a rate of five millimetres per year.

“They might say five millimetres, what is that? But in 10 years, five millimetrtes will become 50 millimetres, and in terms of the English system that’s two inches, in 30 years that is six inches, now consider the sea level rising a further six inches in Guyana or Suriname or Belize,” Leslie said.

“We need to have our political leaders become very knowledgeable of what is being negotiated…technical people can negotiate at the technical level but the final decisions are made at the political level, and therefore if our political leaders are not cognisant with what is going on, then we will fail in terms of getting what is needed for the adaptation that we have to make,” he told IPS.