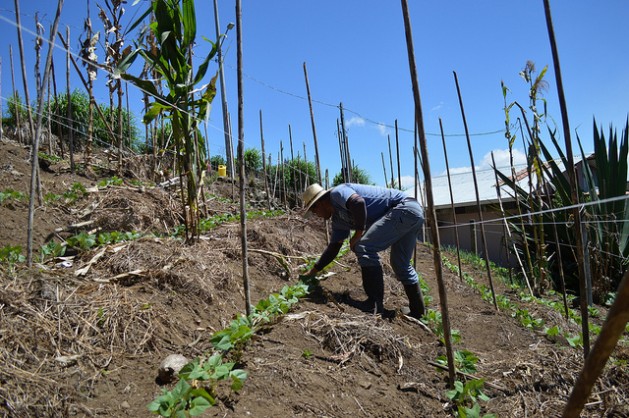 José Alberto Chacón weeds between bean plants on his small farm in Pacayas, on the slopes of the Irazú volcano, in Costa Rica. The terraces help control water run-off that would otherwise cause soil erosion. Credit: Diego Arguedas Ortiz/IPS

ALVARADO, Costa Rica, Mar 4 2014 (IPS) - José Alberto Chacón traverses the winding path across his small farm on the slopes of the Irazú volcano, in Costa Rica, which meanders because he has designed it to prevent rain from washing away nutrients from the soil.

His careful husbandry ensures his crops of beans, maize and carrots on his half-hectare parcel of land, which like that of many other farmers in the Pacayas area, is located on steep slopes that are prone to the loss of the land’s fertile layers.

Chacón told IPS that he is constantly applying techniques like designing a winding path, and building terraces or containment walls with harvest leftovers, and he feels like an acrobat leaping from one measure to another to keep his family farm alive.

“It hurts to see soil being washed into the river. I’m getting older and my piece of land will always be the same size, so I have to find ways of making it flat with terraces, so as to keep working it as long as God wills,” said the 51-year-old Chacón, who is married and has three children.

One of his children helps with the sale of excess produce. His 50-year-old wife, Irma Rosa Loaiza, shares the farm work. “We are a model of family agriculture. She comes out to the plot of land itself to help,” said her husband.

The community of Pacayas, one hour east of San José, is located on the eastern end of the fertile Costa Rican central valley, between the Irazú and Turrialba volcanos. The population density is higher than the national average and it receives 2,300 millimetres of rain a year, on slopes of up to 70 percent.

Now climate change is another factor, increasing rainfall and soil erosion. The Ministry of Environment and Energy estimates that erosion has reduced agricultural GDP by 7.7 percent between 1970 and 1989.

The 2014 agricultural census may show a worsening of the situation in this Central American country of 4.4 million people, where agriculture contributed 10.7 percent of GDP in 2000 but 8.67 percent in 2012, according to official figures.

Chacón, wearing black rubber boots and a white hat for protection against the sun, proceeds along the cultivated rows. His field has a 50 percent slope, and there is a height difference of up to 20 centimetres between one maize row and another, sufficient for rainwater not to pour straight down to the Pacayas river in the canyon below. 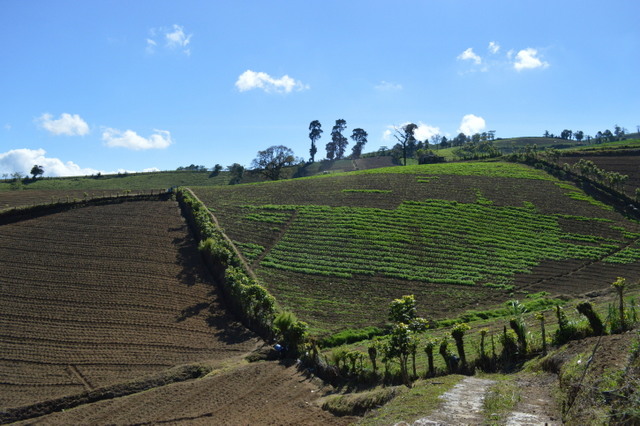 Farmers in Pacaya cultivate crops on a slant across the slope so that rains will not wash away their soil. In this micro-basin, 68 percent of the fields have a slope of more than 30 percent. Credit: Diego Argueda Ortiz/IPS

He is a subsistence farmer, like the rest of the farmers in the area, whose parcels are an average area of 2.5 hectares and who eke their living out of the mountainside. If their crops fail, they do not eat; if they overplant and the soil is washed away, they also fail to put food on the table.

“There has to be a balance between sustainability and food security. I can’t tell local people: this land is unfit for agriculture, you should plant forests, because it is all they have,” agricultural scientist Beatriz Solano, assigned to the area for the past 17 years by the Ministry of Agriculture and Livestock, told IPS.

A study published in 2013 by the journal Environmental Science & Policy describes how “a combination of extreme precipitation, steep topography and questionable land use has led to heavy erosion and impairment of soil regulation services” in the area.

Even families with land on gentler slopes have had to apply new techniques. The certified organic farm Guisol is an example. Its owners, 68-year-old María Solano and 43-year-old Marta Guillén, work small parcels using live hedges to contain erosion, as they showed IPS.

Not all the area’s producers are aware of the importance of such actions. A survey carried out in 2010 by a researcher with the inter-American Tropical Agronomy Research and Training Centre (CATIE), based in this country, found that seven out of 10 farmers in Pacayas did not use soil protection techniques.

Moreover, the small size of the farms means that they do not benefit from payment for forest cover, the preferred system of erosion control in Costa Rica.

Experts say the latest soil conservation practices in family agriculture will be essential in Pacayas, because of the changes in rainfall patterns.

“There used to be steady rainfall from October to January or February, with thick mist. Now it’s more unstable, and without water potatoes do not grow, and it is farmers who lose out, because seeds and fertilisers are increasingly expensive,” 68-year-old farmer Guillermo Quirós, who had to rebuild the drainage channels on his farm two years ago, told IPS.

In 2011 researcher Carlos Hidalgo of the National Institute of Agricultural Innovation and Technology Transfer concluded a research study monitoring soil management in the area.

“It’s a process that has to include all the actors, including municipalities, producers and research centres,” Hidalgo told IPS in his office in San José.

The multi-disciplinary effort is making progress. Every two months, the soil management committee for the Birrís river basin, a group made up of different sectors, meets in Alvarado municipality to which Pacayas belongs. There they plan their work for the next period.

This month the modest town hall of Alvarado hosted the first meeting of 2014, presided over by local environment manager Gabriela Gómez, and seven out of the eight participants were women. In Pacayas, men carry out most of the agricultural work and women take on local planning and conservation.

“We’re gong to ask the TEC (Technological Institute of Costa Rica) to do a study of run-off, so we can improve the ditches, prevent flooding in the lowlands of the district and reduce erosion,” Gómez told IPS. She has led environmental initiatives that have achieved nationwide recognition.

Pacayas is located in the Birrís river basin, a hydrographical complex rising in the mountains above the town, which feeds the hydropower plants of the Costa Rican Electricity Institute (ICE).

The Institute spends close to four million dollars a year removing sediment derived from soil erosion from its reservoirs.

Meanwhile, Chacón and other small farmers keep building terraces following the contours of their plots, to prevent the rains from stripping their topsoil.

The impact is clearly visible. On the other side of the river that borders his field, the earth is reddish and bare and there are only a few green patches lower down the slope. “That soil has already been eroded,” said agricultural scientist Solano.