WASHINGTON, Mar 1 2014 (IPS) - The Barack Obama administration has demanded that Iran resolve “past and present concerns” about the “possible military dimensions” of its nuclear programme as a condition for signing a comprehensive nuclear agreement with Tehran. 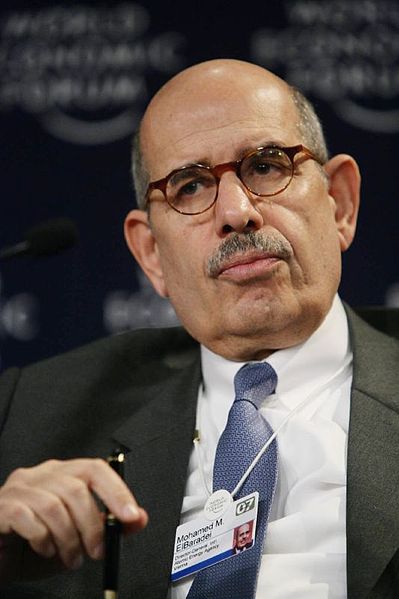 Former IAEA Director General Mohamed ElBaradei referred to a series of documents provided by Israel in his 2012 memoirs. Credit: WEF/cc by 2.0

Administration officials have suggested that Iran must satisfy the International Atomic Energy Agency (IAEA) regarding the allegations in the agency’s report that it has had a covert nuclear weapons programme in the past.

But the record of negotiations between Iran and the IAEA shows Tehran has been ready for the past two years to provide detailed responses to all the charges of an Iranian nuclear weapons work, and that the problem has been the refusal of the IAEA to share with Iran the documentary evidence on which those allegations have been based.

The real obstacle to providing those documents, however, has long been a U.S. policy of refusing to share the documents on the assumption that Iran must confess to having had a weaponisation programme.

The head of Iran’s Atomic Energy Organisation, Ali Akbar Salehi, declared Feb. 12, “The authenticity of each allegation should be proven first, then the person who submitted it to the agency should give us the genuine document. When we are assured of the authenticity, then we can talk to the agency.”

Neither the IAEA nor the Obama administration has responded publicly to Salehi’s statement. In response to a query from IPS, the spokesperson for the National Security Council, Bernadette Meehan, said the NSC officials would have no comment on the Iranian demand for access to the documents.

The spokesperson for IAEA Director Yukiya Amano did not answer a request from IPS Thursday for the agency’s comment.

But a draft text of an agreement being negotiated between the IAEA and Iran dated Feb. 20, 2012, shows that the only difference between the two sides on resolving issues about allegations of Iranian nuclear weapons work was Iran’s demand to have the documents on which the allegations are based.

The draft text, which was later published on the website of the Arms Control Association, reflects Iran’s deletions and additions to the original IAEA proposal. It calls for Iran to provide a “conclusive technical assessment” of a set of six “topics”, which included 12 distinct charges in the report in a particular order that the IAEA desired.

Iran and the IAEA agreed that Iran would provide a “conclusive technical assessment” on a list of 10 issues in a particular order. The only topics that Iran proposed to delete from the list were “management structure” and “Procurement activities”, which did not involve charges of specifically nuclear weapons work.

The two sides had agreed in the draft that the IAEA would provide a “detailed explanation of its concerns”. But they had failed to agree on provision of documents to Iran by the IAEA. The IAEA had proposed language that the agency would provide Iran with the relevant documents only “where appropriate”. Iran was insisting on deletion of that qualifying phrase from the draft.

The first priority on the list of topics to which both sides had agreed in the draft was “Parchin” – referring to the claim of intelligence from an unnamed state that Iran had installed a large cylinder at the Parchin military reservation.

A November 2011 IAEA report suggested the cylinder was intended for testing nuclear weapons designs and had been built with the assistance of a “foreign expert”. Iran also agreed to respond in detail on the issue of the “foreign expert”, who has been identified as Vyacheslav Danilenko, a Ukrainian specialist on nanodiamonds.

The evidence associated with that claim and others published in the 2011 report shows that they were based on intelligence reports and documents given to the IAEA by Israel in 2008-09. Former IAEA Director General Mohamed ElBaradei referred to a series of documents provided by Israel in his 2012 memoirs.

Iran also agreed to respond in detail to allegations that Iran had sought to integrate a nuclear weapon into the reentry vehicle of the Shahab-3 missile, and that it had developed high explosives as a “detonator” for a nuclear weapon.

Both alleged activities had been depicted or described in documents reported in the U.S. news media in 2005-06 as having come from a covert Iranian nuclear weapons programme.

Those documents, about whose authenticity ElBaradei and other senior IAEA officials have publicly expressed serious doubts, have now been revealed as having given to Western intelligence by an anti-regime Iranian terrorist organisation.

Former senior German foreign office official Karsten Voigt revealed in an interview last year for a newly-published book by this writer that senior officials of the German intelligence agency BND had told him in November 2004 that the BND had gotten the entire collection of documents from a member of the Mujahedin-e-Khalq (MEK) who had been one of their sources, and that they did not consider the source to be reliable.

The MEK, considered by the United States and European states as a terrorist organisation, had been used by Saddam Hussein’s regime to support the war against Iran and by Israel to issue intelligence and propaganda that Mossad did not want attributed to it.

ElBaradei, who retired from the IAEA in November 2009, had declared repeatedly that sharing the documents was necessary to ensure “due process” in resolving the issue, but the United States had prevented him from doing so.

In his final statement to the Board of Governors on Sep. 7, 2009 he appealed to “those who provided the information related to the alleged weaponization studies to share with Iran as much information as possible.”

A former IAEA official, who asked not to be identified, told IPS that the United States had allowed only a very limited number of documents to be shown to Iran in the form of Power Point slides projected on a screen.

A May 2008 IAEA report described a number of documents purported to be from the Iranian weapons programme but said that the IAEA “was not in possession of the documents and was therefore unfortunately unable to make them available to Iran.”

Around 100 pages of documents were given by the United States to the agency to share with Iran, the former official said, but none of the documents described in the report were among them.

The U.S. policy of denying Iranian access to the documents continued during the Obama administration, as shown by a U.S. diplomatic cable from Vienna dated Apr. 29, 2009 and released by WikiLeaks. At a P5+1 technical meeting, both U.S. and IAEA officials were quoted as implying that the objective of the policy was to press Iran to confess to the activities portrayed in the papers.

U.S. officials said that a failure by Iran to “disclose any past weaponization-related work” would “suggest Iran wishes to hide and pursue its past work, perhaps to keep a future weapons option”.

IAEA Safeguards Chief Olli Heinonen made it clear that no copies of the relevant documents charging Iran with weaponisation would be provided to Iran and complained that Iran had continued to claim that the documents were fabricated.

In its report of Nov. 14, 2013, the IAEA said it had received more information – presumably from Israel – that “corroborates the analysis” in its 2011 report.

The past unwillingness of the Obama administration to entertain the possibility that the documents provided by the MEK were fabricated or to allow Iran the opportunity to prove that through close analysis of the documents, and the IAEA’s continued commitment to the weaponisation information it has published suggest that the issue of past claims will be just as contentious as the technical issues to be negotiated, if not more so.