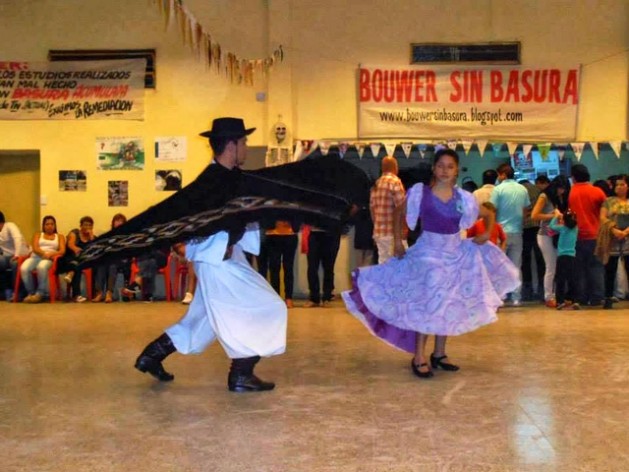 BOUWER, Argentina, Mar 14 2014 (IPS) - While the magnificent samba schools of Brazil were getting ready for the grand carnival in Rio de Janeiro, a modest carnival troupe toured a small Argentine town to draw attention to an urban problem that has brought the central province of Córdoba to the brink of environmental disaster: garbage.

Some 2,300 kilometres away from Rio de Janeiro, a murga (band of street musicians) named Colour and Joy gathered at the foot of a replica of Rio’s Christ the Redeemer statue in the Cordoban town of Bouwer.

But this town of 2,000 people bears a different cross.

“It is no coincidence that waste is dumped in the poorest towns around Córdoba.” -- Cintia Frencia, a provincial lawmaker for the leftwing Workers Party

After a long struggle to close an open sky rubbish dump with an accumulated 12 million tonnes of garbage that finally succeeded in 2010, Bouwer is once again facing the prospect of another waste tip being opened, which would exacerbate chronic pollution in the area.

Twenty-four million tonnes of rubbish generated by the provincial capital and other municipalities over the next 30 years may be deposited on 270 hectares of land only 600 metres away from the old dump.

“Carnival should be for the people, and today we are here to raise awareness about what is happening with the garbage,” Sergio Moggi, the head of the murga, which is made up of children and teenagers, told IPS.

The Colour and Joy murga was one of the attractions at the Festival de la Contaminación (Pollution Festival) organised by residents to call attention to their plight.

One of the criteria for choosing the location for the new dump was the land value, and this counted against Bouwer because of its poverty.

The town is also burdened with the nearby remains of a lead smelter, a storage facility for toxic waste and a vehicle pound, and there is constant spraying of pesticides on the surrounding plantations.

The Environment Defence Foundation (FUNAM) regards Bouwer as “one of the most polluted zones of Argentina.” The large number of sources of pollution and the alarming perinatal and child mortality rates led this municipality to declare a “public health emergency.”

“In the summertime, every town in Córdoba holds a festival to celebrate something typical that represents it: salami, potatoes, and so on. Our characteristic feature, unfortunately, is garbage,” teacher Daniela Arce, of Bouwer Sin Basura (Garbage-Free Bouwer), a local residents’ association, told IPS. 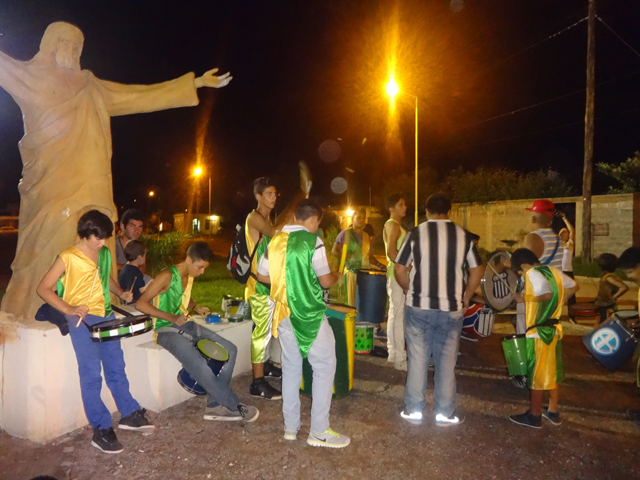 Musicians of the Colour and Joy group tuning drum heads next to a replica of the statue of Christ the Redeemer. Credit: Fabiana Frayssinet/IPS

But Bouwer’s problems are shared by this province, which has extensive fertile plains in the east and the Sierras de Córdoba mountain chains in the west.

The capital city, Córdoba, and 16 smaller surrounding municipalities generate some 2,200 tonnes of solid waste a day, according to the inter-municipal corporation for sustainable waste management in the Córdoba metropolitan area (CORMECOR), a public limited company that is studying technical alternatives for the handling and ultimate disposal of waste from the greater Córdoba area.

“The problem calls for waste treatment technology and a space for its disposal, and so far has not been handled in an integrated way,” says CORMECOR’s website.

The main shareholders of CORMECOR are the city of Córdoba, nine other municipalities and the garbage collectors’ union.

The normal practice was to bury garbage or dump it in open sky pits until 1981, when it began to be sent to the Bouwer tip.

Since that closed in 2010 – and it still contains 30 years’ worth of rubbish – waste has been taken to a temporary dump in Piedras Blancas, hastily made ready in less than two months and located beside national route 36, only five kilometres away from Bouwer.

Piedras Blancas has received 2,500 tonnes a day since 2010, when its estimated useful life was declared to be one year. According to the authorities it is now on the verge of collapse.

“The garbage is deposited and crushed daily, and earth is spread on top of it at the end of each day. The gases are vented, without being captured or treated; the liquid leached from decomposition of organic material is not treated either,” Nayla Azzinnari, FUNAM’s press officer, told IPS.

Now the provincial government is preparing to expropriate two pieces of land for the new project: one near the unfortunate Bouwer and another, for a transfer station, near the town of Estación Juárez Celman in the centre-north of the province.

CORMECOR is analysing proposals for waste treatment from 27 companies (from Argentina, the Netherlands, the United States and Brazil) and universities, while the people who have had the problem dumped on them have some answers of their own.

Bouwer produces less than half a truckload of waste a week, while the capital contributes 95 percent of the total.

In the view of biologist Ricardo Suárez, a technical adviser for local people in Bouwer, garbage should be tracked back to its origins. “Our problem is out of all proportion,” he complained.

The executive, legislative and judicial branches should take action to moderate consumption and persuade companies to sell their products with less throw-away packaging, he suggested.

The justice system should punish environmental crimes, such as failure to process waste, and municipalities should invest heavily in separation and recycling programmes and educate citizens in these new habits.

“We could achieve really low, tolerable limits [of pollution]. What we cannot accept is 12 million tonnes of garbage buried in one place, as we have now,” Suárez said.

To accomplish this, waste management must be “decentralised,” so that there are no more “sacrificed zones” like Bouwer, he told IPS.

“The first thing to do is to sit down and study the problem, and not to underestimate waste,” said chemical engineer Eduardo Riaño, who has analysed the effects of the gas and liquid emissions in Bouwer, which persist decades after the dumps were closed.

“Volatile organic compounds are very dangerous” and can cause cancer, he told IPS.

On the other hand, these deposits of organic material can be used to generate energy.

In the view of Cintia Frencia, a provincial lawmaker for the leftwing Workers Party, there are vested economic interests standing in the way of waste treatment and recycling.

“It is no coincidence that waste is dumped in the poorest towns around Córdoba,” she told IPS.

“Now there is talk of a new garbage burial site with a 30-year lifetime, which means that for the next three decades there are no plans to develop any technology for reducing and treating rubbish, in other words it’s just a business,” she said.

CORMECOR wants to raise capital by being listed on the national stock market.

Garbage is big business all over the world. In countries like Italy, it is profitable not only to companies but to the mafias that control them.

IPS obtained no replies to its requests for information from CORMECOR and the environmental secretariats of the provincial and city government.