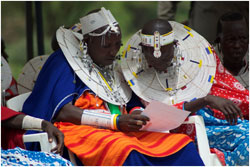 UNITED NATIONS, Mar 6 2014 (IPS) - “Women entrepreneurs reinvest about 90 percent of their revenues back to their community, compared to 40 percent for men,” Arancha Gonzalez, Executive Director of the International Trade Centre (ITC), said Thursday.

The ITC has established the Ethical Fashion Initiative (EFI) aimed at promoting fair wages for dignified work in the fashion industry in Africa and Haiti.

Some of the most marginalised groups, essentially poor female artisans, have been linked to some of the top fashion houses in the world like Stella McCartney, Vivienne Westwood, and Marni.

Under that initiative, the organisation has not only trained women through the stages of production, but also offered assistance for women’s economic independence by encouraging them to open their own bank accounts or familiarise them with business models and entrepreneurship.

According to the World Bank’s 2013 database, 38 out of 141 economies helped establish equal legal rights for women and men in key areas to female entrepreneurship such as opening a bank account, getting a job without permission from their spouse, and owning and managing property.

Simone Cipriani, head of the EFI, thinks it should be a core component of fashion to care about the future of human kind and their environment because fashion is about quality and about people.

In addition to satisfy fashion’s necessity to be fairer, the concept of ethical fashion is profitable. Gonzalez said, “Our work is not just ideological but very much economic”.

The initiative claims to give work to skilled artisans to get valuable products in demand, while never coercing artisans to endure excessive overtime hours or undignified conditions.

While 20 percent of the micro-producers involved earned less than a dollar a day before, they gained more than four dollars a day with the initiative.

The Poor Communities Trade Programme of the ITC, under which the initiative operates, aims at involving micro-entrepreneurs in the developing world with international and regional trade.

As of today, 650 companies worldwide have signed and taken commitment to support gender empowerment principles of the UN. The EFI said more can be done, and they were committed to promote more local designers as well as increasing regional export capacities.