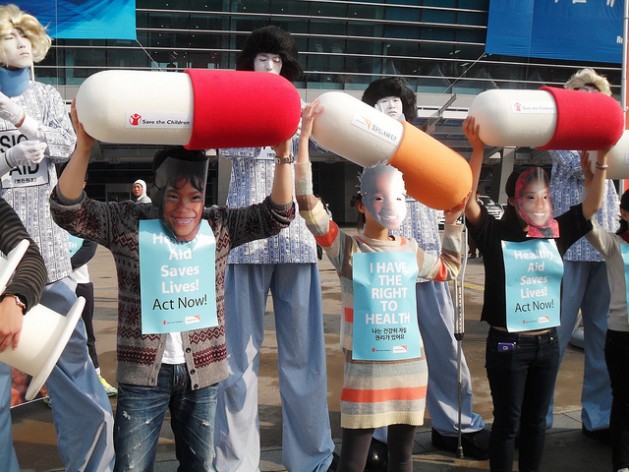 Demanding a right to health at the Fourth High Level Forum on Aid Effectiveness in Busan in 2011. Credit: Miriam Gathigah/IPS

WASHINGTON, Apr 1 2014 (IPS) - Major foreign assistance donors have once again delayed the release of a report meant to measure transparency, accountability and cooperation of aid effectiveness.

The repeated delay of the voluntary U.N.-guided report, which was originally slated for release in January but was bumped for at least a second time last week, has prompted some aid groups to question donor countries’ commitment to aid transparency. The report would be the first of its kind.

"If your donors aren’t going to disclose where they’re going to build, how does a farmer know to grow a crop for export or for domestic consumption?” -- Gregory Adams

“We see this play out in the development sphere. If your donors aren’t going to disclose where they’re going to build, how does a farmer know to grow a crop for export or for domestic consumption?”

The push for this novel report emerged in 2011, when government officials, industry representatives and civil society members met in Busan, South Korea, at a conference hosted by the Organisation for Economic Cooperation and Development (OECD), a grouping of wealthy countries.

The conference spurred donor governments, along with the United Nations Development Programme (UNDP), to the create a new body, the Global Partnership for Effective Development Cooperation (GPEDC), which emphasises the “ownership” of aid recipients over development strategies alongside strengthened transparency and accountability for aid programming.

The global monitoring framework on aid effectiveness would assess and track progress on the agreements made in Busan, and was slated for release in early 2014, but it has been postponed several times.

The Busan principles call for the ownership of development projects by developing countries themselves, a results-oriented approach, inclusive partnerships with aid beneficiaries, and mutual accountability and transparency. They emphasise collaboration and partnerships with aid beneficiaries to give them a greater input into the design of development strategies while allowing them to ensure that aid money is used on actual, effective development projects.

“Aid no more cures poverty than a shovel digs a ditch or a hammer builds a house. You actually need people who drive that, and if you deny people who drive your development basic information about what you’re doing, you’re not only missing opportunities but also frustrating the people you’re trying to help lead their own development.”

The report was originally slated for release before an upcoming GPEDC meeting on Apr. 15 in Mexico City, so that donors could assess progress made on the Busan agreement while developing new strategies for their implementation.

While it is unclear why the report’s public release has been repeatedly delayed, some analysts see a political motive. It appears the report’s findings will highlight the lack of progress made in implementing the Busan reforms.

Oxfam and other watchdog groups have raised concerns regarding the report’s delay and, more generally, the implementation of the Busan principles from both developed and developing countries.

“The early findings of the GDEPC monitoring evidence show that overall little progress has been made, though they are being sold as ‘glass half full’,” Oxfam America wrote last week in a blog post. “For a number of indicators, it is too early to tell.”

“But of particular concern are the indicators that measure aspects of country ownership … Unlike previous reporting on aid effectiveness, data on how individual governments have performed will not be made available in the full monitoring report, with the exception of the transparency indicator.”

Hannah Ryder, a team leader at the United Kingdom’s Department for International Development (DFID), also notes that while the report measures 10 indicators, the individual success of each country is only ranked on one indicator – transparency. She says this is purely for political reasons, suggesting that some donors are unwilling to publicly disclose their performance on most indicators.

“UNDP and OECD are organisations that are not independent of the countries and organisations submitting the data,” Ryder wrote last week in a DFID blog entry. “And this is why ranking is too political for them.”

Ryder continued: “The key reason why transparency is able to be ranked in the report is that there is already an independently published report on transparency that has become well-known and well-respected … But for the other nine indicators and issues raised in [the] forthcoming report, no such credible, independent rankings exist yet.”

She refers to the Aid Transparency Index, published by the global watchdog group Publish What You Fund. The index also relies on a reporting framework that stems from the commitments donors made during the Busan conference.

While Oxfam’s Adams said that transparency and aid disclosure is a relatively new concept for development organisations, he stressed its importance.

“When that data is out there, it permits people to do two things,” he said. “One, they can think in a more sophisticated way about how they themselves can invest to best take advantage of these development investments. And secondly, it allows them to demand accountability for what’s being promised.”

The increased emphasis on funding transparency and an inclusive, results-driven approach to aid comes at a time when all donor countries, including the United States, are undergoing tightened fiscal constraints.

“I think [monitoring and evaluation] has been bubbling around for a while now, but over the last two years it’s really coalesced into this specific focus as we’ve seen downward pressures on the budget,” Casey Dunning, a senior policy analyst at the Centre for Global Development, a think tank here, told IPS.

“I think it can be directly tied to budget austerity and the shift away from new programming. The emphasis has shifted to how we are using our resources and how we are making the most of what we actually have.”