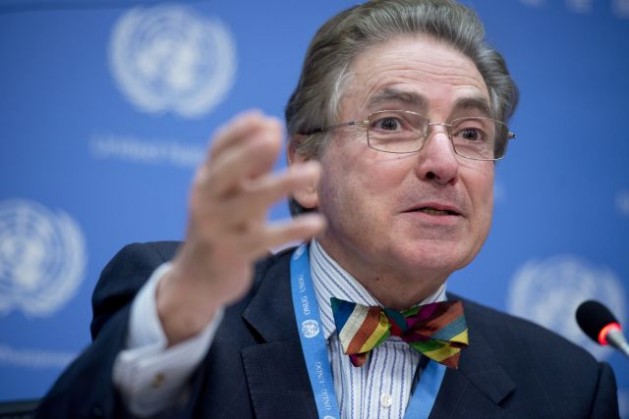 The U.N.'s Independent Expert on the promotion of a democratic and equitable international order, Alfred de Zayas, says it is governments' responsibility to inform the public about military expenditures - and to justify them. Credit: UN Photo/Amanda Voisard

UNITED NATIONS, Apr 14 2014 (IPS) - Secretary-General Ban Ki-moon, who has relentlessly advocated drastic cuts in global military spending in favour of sustainable development, will be sorely disappointed by the latest findings in a report released Monday by the Stockholm International Peace Research Institute (SIPRI).

The decline in arms spending in the West, says SIPRI, has been offset by a rise in military expenditures by emerging non-Western and developing nations who are, ironically, the strongest candidates for development aid.

"Four hours of military spending is equal to the total budgets of all international disarmament and non-proliferation organisations combined." -- U.N. Secretary-General Ban Ki-moon

Asked whether there are any future prospects of reversing this trend, Dr. Sam Perlo-Freeman, director of SIPRI’s Military Expenditure Programme, told IPS, “At present, there is little or no prospect of a large-scale transfer of resources from military spending to spending on human and economic development.”

The Western countries in the top 15 were the United States, France, UK, Germany, Italy and Australia, plus Japan. Canada, a former high spender, dropped out of the list in 2013.

“While in some cases it is the natural result of economic growth or a response to genuine security needs, in other cases it represents a squandering of natural resource revenues, the dominance of autocratic regimes, or emerging regional arms races,” he added.

World military expenditure totalled 1.75 trillion dollars in 2013, a fall of 1.9 percent in real terms since 2012, according to SIPRI.

The fall in the global total comes from decreases in Western countries, led by the United States.

But military spending in the rest of the world increased by 1.8 percent.

Bemoaning the rise in arms spending, the secretary-general said last year the world spends more on the military in one month than it does on development all year.

“And four hours of military spending is equal to the total budgets of all international disarmament and non-proliferation organisations combined,” he noted.

Last week, a U.N. expert came out strongly against rising arms expenditures on the occasion of the Global Day of Action on Military Spending.

The U.N.’s Independent Expert on the promotion of a democratic and equitable international order, Alfred de Zayas, called upon all governments “to proactively inform the public about military expenditures and to justify them.

“Every democracy must involve civil society in the process of establishing budgets, and all sectors of society must be consulted to determine what the real priorities of the population are,” he said in a statement released here.

Lobbies, including military contractors and other representatives of the military-industrial complex, must not be allowed to hijack these priorities to the detriment of the population’s real needs, he added.

According to SIPRI, the fall in U.S. spending in 2013, by 7.8 percent, is the result of the end of the war in Iraq, the beginning of the drawdown from Afghanistan, and the effects of automatic budget cuts passed by the U.S. Congress in 2011.

Meanwhile, austerity policies continued to determine trends in Western and Central Europe and in other Western countries.

Perlo-Freeman told IPS the worst conflict in the world today, in Syria, which has killed over 150,000 people, is still less severe than the worst conflicts of even 15 years ago, such as the war in the Democratic Republic of Congo (DRC) which led to the deaths of millions.

There are certainly tensions in many parts of the world, most notably between Russia and Ukraine at the moment, but inter-state armed conflict is still extremely rare, he added.

“I think the increases in military spending in many parts of the world can rather be traced to a continuing belief in the centrality of military power to conceptions of national security and national greatness,” he said.

He said the United States has set a very clear example in this regard, most especially under the administration of President George W. Bush (2001-2009), but even now the notion that U.S. global military supremacy is a national necessity is effectively unchallenged in the political mainstream.

Other major powers, especially Russia and China, do not view this U.S. dominance in their neighbourhoods with equanimity, or accept their subordinate position in the system.

While neither can challenge the U.S.’s global role, each has been seeking to increase their own military power sufficiently to be able to exert regional influence and not be subject to U.S. dominance, he noted.

This pattern is repeated at lower levels, amongst middle powers such as India.

“Even in much more peaceful regions, Brazil, which has always sought a higher status in the international system, regards having a strong, modern military as an essential part of this,” Perlo-Freeman said.

However, Brazil’s spending has leveled off in recent years, as its economy has not been as strong as in the past and as it has other pressing social priorities that compete with military spending.

There are other important factors as well – one is simply economic growth, which tends to lift military spending along with other areas of spending, said Perlo-Freeman.