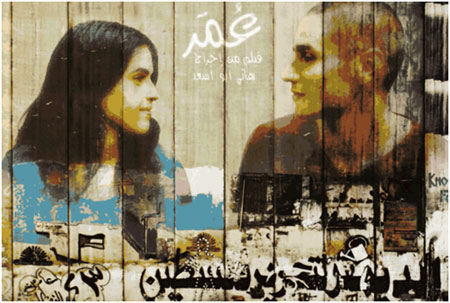 UNITED NATIONS, May 16 2014 (IPS) - ‘Omar’, a thriller and love story by director Hany Abu-Assad, is the first movie of its kind to be funded almost entirely by Palestinians, using a majority-Palestinian crew.

It tells the story of what is for many Palestinians “ordinary life”. The protagonist, Omar, a young Palestinian baker, is forced to have routine interactions with Israeli soldiers at checkpoints that separate him from his Palestinian lover, and the homes of his friends.

The film exposes the many consequences a Palestinian faces for lashing out against the Israeli occupation, as well as the resource-imbalance between Palestinian “freedom fighters’” – who scrounge stolen cars and rig up amateur explosives – and the Israeli military’s high-tech helicopters and precision weapons.

Academy Award-nominee for best foreign-language movie, ‘Omar’ was recently screened at the United Nations Headquarters to honour the designation of 2014 as the International Year of Solidarity with the Palestinian People (IYSPP).

Proclaimed by the General Assembly in November 2013, the IYSPP is based on the belief that a peace process between Israel and Palestine is impossible without improved international awareness on the core issues that comprise the ‘Palestinian question’: the problem of settlements, the blockage of Gaza, and the application of international laws.

The film’s co-star and producer Waleed Zuaiter told IPS the challenges they faced during production were not political but typical of the obstacles that hinder independent moviemaking in a country with limited resources.

Still, whenever a motion picture is inspired by Palestinian experiences, political hiccups are usually close at hand.

“A lot of the world does not know about the wall,” Zuaiter said, referring to the part-concrete part-barbed-wire barrier that was erected during negotiations of the Oslo Accords in 1996 to limit Palestinians’ movements.

Still, the film purposely chose not to explain the history behind the wall in order to spark intrigue and raise questions by showing rather than telling the reality of a highly controversial structure.

The film comes at a critical juncture, coinciding with determined attempts by the Palestinian government to gain legitimacy as an official U.N. member state, as opposed to their current status as a Permanent Observer.

‘Omar’ brings the list of Palestinian movies screened this year at U.N. headquarters up to three.

Despite this cultural penetration, progress on a viable peace process within the Security Council, largely seen as the U.N.’s steering committee, has been less promising.

Palestinian director Abu-Assad is known for believing in the role art can play to shake up the status quo, while Executive Director Abbas F. Zuaiter’s main motive was to allow talented artists and members of the younger generation to express themselves through story telling.

Especially since the Arab Spring, young people have felt the urge to utilise technology to spread awareness about their realities, the director told IPS, and that train of thought must be encouraged.

As an investor, he said in an interview with IPS, he wanted filmmakers from the region to “have their stories…read, critiqued, underwritten and distributed”, and investors to realise it is a profitable industry.