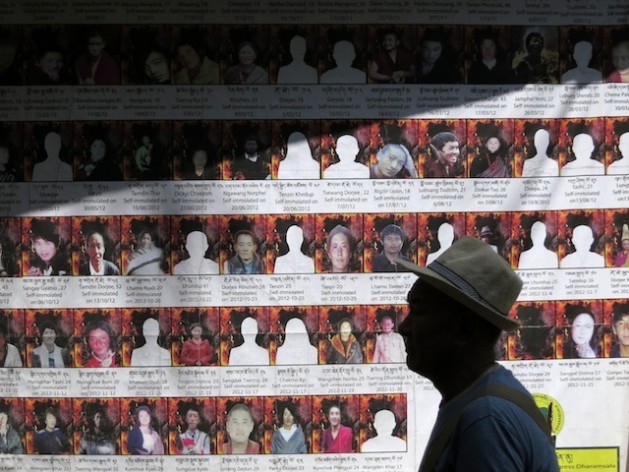 DHARAMSALA, India, May 20 2014 (IPS) - Nestled in the Kangra Valley in the shadow of the Dhauladhar Mountains in the northern Indian state of Himachal Pradesh, Dharamsala is beautiful to behold. But the scenic landscape belies a dark reality: the cult of martyrs that has developed in this town, home to the Tibetan government-in-exile since 1959.

“People take their lives out of desperation and helplessness. Instead of disappearing into [Chinese] prisons, they choose to die in the fire." -- Kirti Rinpoche, exiled abbot of the Kirti Gompa monastery
Since 2009, almost 130 people have set themselves aflame in protest over China’s heavy-handed tactics in the Tibetan plateau. For decades Tibetan people have been demanding an end to Chinese rule and the return of the Dalai Lama, their spiritual leader, who fled Tibet’s former capital Lhasa over 50 years ago.

The “suicidal tide” swept Tibet in the aftermath of protests that erupted in Lhasa in the lead-up to the 2008 Summer Olympics in Beijing, and then spilled all over the Land of Snow.

Today, the faces of those men and women are omnipresent throughout the Indian city that hosts the bulk of some 100,000 Tibetan exiles.

The flames that claimed so many lives have become an important element of patriotic murals, sculptures and paintings visible all over Dharamsala. Even more spectacular are the large posters that display photographs of all those who committed suicide, each accompanied by a brief caption containing nothing more than the person’s name, place of origin and date of death.

Shadowy silhouettes stand in for those whose photographs could not be found. Some images capture martyrs in their final moments, consumed by fire. Other pictures show only charred corpses, unrecognisable without the identifying information.

The jury is still out on whether martyrdom is helping or hurting the Tibetan cause, with the diaspora far from reaching a unanimous assessment on self-immolations.

Take Tenzin and Ngawang, inseparable friends who were born in Lhasa in the 1980s and generally see eye to eye on just about every topic under the sun. But when it comes to the subject of patriotic suicides, the two stand on opposite sides of the debate.

One of the last people to self-immolate was a monk named Jigme Tenzin, who set himself alight and died outside of the Shador monastery in China’s Qinghai Province on Mar. 16.

After his protest, security forces arrested and severely beat a number of monks and also arrested members of the martyr’s family.

But China’s wrath does not only come in the form of armed personnel.

On Apr. 8 last year, the Ruo’ergai County People’s Government in Sichuan issued the Notice of Interim Anti-Self-Immolation Provisions, designed to collectively punish the members of a martyr’s family or household.

One of the articles provides for the halting of all investment projects in any community, village, or monastic institution associated with a self-immolator, and the withholding of new loans for three years.

Another provision requires a community, village or monastic institution where a self-immolation takes place to pay a “security deposit” of 10,000 to 500,000 yuan (between 1,600 to 80,000 dollars), a sum that would be reimbursed if another self-immolation does not occur within two years.

“This is great,” Ngawang, who gave only his first name, told IPS. “Those brave people show that they do not want to be slaves, that we still belong to one nation, and we are ready to die for it.”

The young man’s opinion echoes that of any Tibetan who is strongly opposed to China’s constant policing of the community, the replacing of Tibetan with Chinese as the language of instruction for all students above primary-school age, and laws that forbid Tibetans from freely practicing their religion, including a ban on displaying photographs of the Dalai Lama.

Tenzin, however, shakes his head, saying gravely, “Most of those who take their lives are in their twenties or thirties. This is a loss for our nation and we cannot afford such a waste.”

Tibetans have learned, the hard way, that aggressive or violent resistance will not lead to freedom but only to bloodshed and a further restriction of liberties. This maxim was tested most recently during the 2008 protests, when Tibetans in Lhasa set fire to some shops run by Chinese immigrants, provoking a wave of repression from the Chinese authorities.

Some argue that self-immolations fall somewhere in-between the two, representing the need for a rebellion while embodying the principles of non-violence.

“This is a sacred act, not born of hatred,” a monk named Kanyag Tsering told IPS. “In their last messages, those people do not call for the overthrow of the communist government [of China], but for the return of the Dalai Lama.

“They ask their fellow countrymen to give up gambling, avoid discord, work together for the well-being of Tibet. They do not harm anyone. While taking their lives, they could easily take the lives of some Chinese too, but they do not,” he added.

Paradoxically, most Tibetans are deeply religious, practicing a form of Buddhism that prohibits suicide. But supporters of self-immolations, lay and religious people alike, claim that Buddhism does not forbid the sacrifice of one’s life for a higher purpose.

In fact, one of the first references to self-immolation, which simply means ‘sacrifice’, can be found in the ancient Buddhist texts known as the ‘Jataka tales’, which recount an incident involving a past incarnation of the Buddha giving up his body to feed a hungry tigress.

“People decide to self-immolate for the good of the six million Tibetans in Tibet…This means their intentions are good, that they are acting in accordance with the teachings of Buddha,” Kirti Rinpoche told IPS.

He added that there is not a single family in Tibet who, since the first uprising of 1959 and subsequent exile of the 14th Dalai Lama, has not had at least one member killed or tortured in prison.

“People take their lives out of desperation and helplessness. Instead of disappearing into prisons, they choose to die in the fire,” the monk said.

Despite the backing of influential spiritual leaders, more and more Tibetans are coming to realise that the flames are futile.

Five years of self-immolations have prompted little by way of international pressure on Beijing, which has responded by stepping up arrests and repression of anyone even suspected of being involved with the suicides – families, friends, monasteries and, sometimes, whole villages have been denied civil rights and forced to pay heavy fines.

So far the strongest call to halt the fiery protests has come from inside Tibet itself. In November 2012, the lamas (spiritual leaders) of Rebgong – a county in China’s Qinghai province – wrote: “Knowing the value of human life, we beseech you, kneeling on the ground and folding hands on our chests: stop the desperate self-immolations.”

The lamas advised Tibetans to use their “priceless human bodies” to “make great deeds for the benefit of all beings”, rather than giving in to “despair, agony and suffering.”

From the diaspora, the lone call echoing similar sentiments came from the Karmapa lama, the widely revered head of the Karma Kagyu order, an important sect of Tibetan Buddhism.

The government-in-exile remains ambiguous. Prime Minister Lobsang Sangay insists that while he “highly discourages” the drastic action, it is the “sacred duty” of the exiled community to support it.

Meanwhile, the only man capable of stopping the burnings – the one whose name hangs on the lips of all those writhing in the flames – avoids the subject.

Pressed by journalists, the Dalai Lama has called the acts “understandable” but says he does not encourage them. Some say his words can be interpreted as silent encouragement.

He himself has no doubt that the sacrifices would end if the spiritual leader wanted it so, but recognises that if the Dalai Lama called for a complete halt of all burnings and the people obeyed, it would only confirm China’s accusations that the previous acts could not have happened without his say-so.