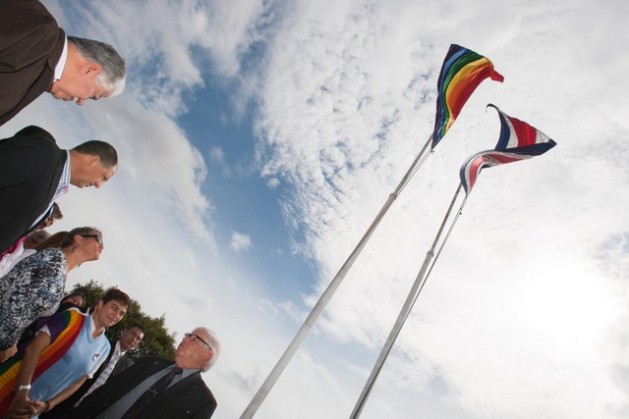 SAN JOSE, Jun 12 2014 (IPS) - Grey-haired gay activist Marco Castillo and his partner Rodrigo Campos are about to enjoy equal health care rights. For the first time in Costa Rica, and in Central America as a whole, homosexual couples will enjoy the same access to public health services as heterosexuals.

The decision by Costa Rica’s social security system to extend medical benefits to same-sex couples came just after centre-left President Luis Guillermo Solís, who took office May 8, sent out a strong signal against homophobia by having the rainbow flag raised at the presidential palace.

Castillo and Campos are just one illustration of the inequality that marks a region plagued by discrimination against sexual minorities. Although Castillo, 70, has been enrolled in the social security system for a large part of his life, he has never been able to provide his partner with health coverage because their relationship was not recognised by the state.

The good news for the lesbian, gay, bisexual and transgender (LGBT) community came on May 22, when the social security institute (CCSS), which runs the country’s public hospitals and social security system, approved a reform that grants same-sex couples the same medical benefits and hospital visitation rights enjoyed by heterosexual couples.

The reform is to go into effect in August. To qualify, same-sex couples will have to prove that they have been living together for at least three years.

The next step that is expected shortly is CCSS board approval of equal pension rights for same-sex couples.

“This is an important step in achieving our rights, a result of growing social awareness of our problems,” Castillo told IPS. “It doesn’t mean we have gained all our rights, but it does show that we have begun to move in that direction.”

Castillo, a lawyer who heads the Diversity Movement, which fights for the rights of LGBT persons, plans to sign up his currently unemployed partner for social security health insurance as soon as possible.

There have been other indications as well of a new openness in this mainly Catholic country of 4.5 million people. The government of Solís, from the centre-left Citizen Action Party (PAC), has shown signs that it plans to take up the cause of sexual diversity.

The situation in the rest of the countries of Central America is less encouraging, where discrimination, and even harassment, is common. In countries like Honduras and Nicaragua, IPS found that the most significant advance made was the creation of specialised legal units to address the problem of discrimination against the LGBT community.

Within Latin America, Central America is lagging farthest behind in terms of guaranteeing the rights of members of the LGBT community, concluded the sixth Regional Conference of the International Association of Lesbian, Gay, Bisexual, Trans and Intersex People for Latin America and the Caribbean (ILGALAC), held May 5-10 in Cuba.

“The outlook for the [Latin American and Caribbean] region is much more complex than what we thought,” Mexican activist Gloria Careaga, secretary general of the International Lesbian and Gay Association (ILGA), said during the conference. “We have seen strides forward, but also major setbacks in regions like Central America.”

Hate crimes are the most serious manifestation of just how far behind Central America is lagging with respect to the rest of Latin America.

According to the Centre for AIDS Education and Prevention (CEPRESI), a non-governmental organisation in Nicaragua, nearly 300 hate crimes have been committed against the LGBT population in Central America in the last five years.

In Nicaragua, the situation is very different for LGBT persons than in Costa Rica.

Marvin Mayorga, with the Sexual Diversity Initiative for Human Rights, told IPS that in his country the only progress made at an institutional level since the LGBT community formally organised in 1985 was the 2009 appointment of a prosecutor for the defence of sexual minorities within the office of the human rights prosecutor or ombudsperson.

But Mayorga said the office lacks the funds to monitor abuses and has focused its efforts almost exclusively on the fight against HIV/AIDS.

When asked for a comment, the office responded to IPS twice that it “did not have time.”

In Honduras, the struggle is led by the Civil Society Group (GSC), an alliance of social and humanitarian organisations that include LGBT groups.

The GSC’s leaders say it has been an uphill battle.

“We have to break down many taboos and gain visibility in society,” GSC activist Omar Rivera told IPS. “But we managed to get the office of the public prosecutor to create a special unit for investigating high-impact murders, including those against the LGBT community, a year ago.”

The unit investigates killings of journalists, lawyers, human rights defenders, and members of the LGBT community in Honduras, which according to the United Nations Office on Drugs and Crime (UNODC) has the highest homicide rate in the world: 96.1 murders per 100,000 population, compared to a global average of 8.8, a Latin American average of 29, and a Central American average of 41.

In Costa Rica, the authorities would appear to be more receptive. The reform of the social security system came just a few days after President Solís had the rainbow flag hoisted over the presidential palace on May 16, the day before the International Day Against Homophobia and Transphobia, in an unprecedented ceremony in this country.

One of the members of Solís’s cabinet is openly gay: Tourism Minister Wilhem von Breymann, who took part in the ceremony along with his partner of 19 years.

And Vice President Ana Helena Chacón was asked to be one of the two marshals in a Jun. 29 March for Diversity, in recognition of her defence of LGBT rights.

The main criticism voiced by the groups that defend the rights of sexual minorities targets the legislature. In the face of staunch opposition by lawmakers linked to the Catholic and evangelical churches, PAC is trying to push through any one of four draft laws that would legalise and regulate same-sex civil unions, which have been bogged down since the previous legislature.

“In the first week of June, the committee on legal affairs agreed to send the draft laws to subcommittee, which will study them for six months,” the head of the PAC legislative bloc, Emilia Molina, told IPS.

Meanwhile, as of August, Rodrigo Campos will have public health coverage thanks to his partner Marco Castillo, who will be able to visit him if he is ever in the hospital, with the same rights and privileges enjoyed by heterosexual couples.

Perhaps it is only one step forward – but for LGBT activists it is a huge stride. Although Castillo stressed that now that this battle has been won, they have their eyes set on many more victories.