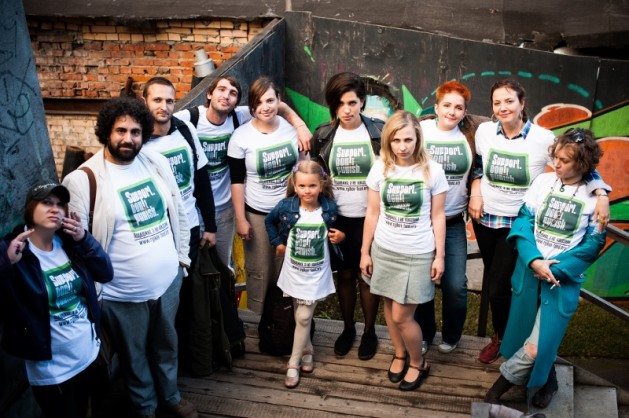 MOSCOW, Jun 26 2014 (IPS) - A protest in Moscow Thursday marking the U.N. International Day Against Drug Abuse and Illicit Trafficking has highlighted the ‘torture’ drug users are put through in the Russian criminal justice system.

Nadezhda Tolokonnikova and Maria Alyokhina, members of the Pussy Riot Group who were controversially jailed for performing in a Moscow cathedral in 2012, spoke in the Russian capital to highlight the plight of drug users in Russia.

Joining protestors in more than 80 cities around the world demanding drug policy reforms, they attacked what they said was their country’s “cruel and inhuman” treatment of drug users.

Describing a litany of rights abuses against drug users, including torture and beatings by police and prison warders, they said Russian authorities viewed imprisonment as a “cure for drug dependency”.

“Similar to xenophobia and homophobia, narcophobia has become a protective cloak for the authorities .... Creating an image of the enemy, the subhuman, the zombie, and reinforcing that image in the public consciousness justifies the inhuman treatment of drug dependent people in our country” – Nadezhda Tolokonnikova and Maria Alyokhina, members of the Pussy Riot punk rock group

“People who use drugs are outcasts – they are despised, hated, accused of all problems, and criminalised. Similar to xenophobia and homophobia, narcophobia has become a protective cloak for the authorities…. Creating an image of the enemy, the subhuman, the zombie, and reinforcing that image in the public consciousness justifies the inhuman treatment of drug dependent people in our country,” they said.

“Russia’s drug policy is built on torture. Humiliation and violation of human dignity – thisis what drug dependent people face everywhere, from hospitals to prisons and other state facilities,” they added.

Russia takes a hard-line approach to drug use, implementing repressive drugs legislation, including lengthy jail terms for possession of even tiny amounts of hard drugs.

Drug users say they are also targeted by police: official figures show that one in six of the Russian prison population is a drug user and, according to other surveys, just under 30 percent of drug users have been arrested at some point since they started using drugs.

They say they also regularly have confessions extracted from them or are coerced into helping officers as they go into withdrawal in detention – a charge police deny.

There is a complete lack of relevant medical services for drug users in temporary holding facilities and pre-trial detention centres and even painkillers are rarely given to addicts going into withdrawal.

Anya Sarang, head of the Moscow-based Andrei Rylkov Foundation for Health and Social Justice, which works to raise awareness of drug problems, told IPS: “Russian prison is torture in itself with prisoners not given basic medical infection control, nutrition etc., and general human rights violations. But drug users are more vulnerable than other prisoners.

“For instance many are HIV positive, but not only are there problems getting their medicine or starting them on treatment because they are not given necessary immune system checks in some cases, but their diet is poor and there is always the risk of infections, such as tuberculosis.”

Tuberculosis (TB) is a major problem in Russian prisons, according to the World Health Organisation (WHO) and other bodies. Studies have shown that a person with HIV is 25 times more likely to contract TB in a Russian prison than outside one.

But the risk of potentially deadly infections is only one problem facing drug users in prisons. As in many jails across the world, drugs are smuggled in and traded between inmates, giving users, some of whom may never have tried hard drugs, access to substances like heroin and experience of dangerous drug-taking methods.

Campaigners say that this is further evidence of how the criminalisation of drug use only perpetuates and worsens drug problems.

Michel Kazatchkine, UN Special Envoy for HIV/AIDS in Eastern Europe and Central Asia, told IPS: “We know from studies that contact with the criminal justice system is associated with increased injection drug use and other similar behaviour, among other problems. Putting drug users in prisons …. is making things worse not just in prisons but also for communities when they are released from prison.”

Activists point to how opioid substituition therapy (OST) for people in custody or prison has been successfully implemented in some Western states.

But the practice is completely banned in Russia, despite being widely implemented in many countries around the world, recommended by the World Health Organisation (WHO), and having been proved to be successful in helping halt the spread of HIV/AIDS.

Russia has one of the world’s fastest growing HIV/AIDS epidemics – there were 78,000 new HIV cases registered last year, up from 69,000 in 2012 and 62,000 in 2011 – which the Joint United Nations Programme on HIV and AIDS (UNAIDS) and other bodies say has been historically driven by injection drug use.

Drug use in the country is growing equally rapidly. According to figures from the country’s Federal Drug Control Service (FSKN) there were an estimated 8.5 million drug addicts in 2013 – up from 2.5 million since 2010. The service says up to 100,000 people die each year in Russia from drug abuse. It is also the world’s largest heroin consumer.

Tolokonnikova and Alyokhina said only a reform of drug policy including decriminalisation would improve the situation in prisons.

But Russian authorities show no sign of lifting the OST ban nor improving the very limited harm reduction services which exist in the country and FSKN officials have made a number of public statements in recent months reaffirming their commitment to hard-line drugs policies.

Kazatchine told IPS: “I don’t see any sign of Russia’s approach to drugs softening. What I am seeing is a toughening of the way Russian society looks at marginalised groups, such as drug users, men who have sex with men, LGBT people, etc. The climate has toughened and Russia is de facto criminalising drug use and recession.”

This, critics say, has left Russian drug users in a terrible position in society. Sergey Votyagov Executive Director of the Eurasian HRM Reduction Network (EHRN), told IPS that they were “one of the most stigmatised and under-served populations” in the country.

Meanwhile, the devastation wrought by Russia’s drugs policies has been seen clearly in its newest territory. Just days before Thursday’s protest in Moscow, campaigners in Ukraine had raised the alarm over the fate of drug users in Crimea following its recent annexation.

OST is available in Ukraine and had been provided to 800 people in Crimea. But as part of Russia, Moscow ordered OST programmes there shut down at the start of May.

A mission by the Council of Europe to Crimea which ended last month reported that at least 20 people had died following the cessation of the programmes and at least 50 more had migrated to the Ukrainian mainland, while a few had gone to Russia for detoxification and rehabilitation treatment.

Those who remained spoke of having to deal with intimidation by new authorities and, in some cases, losing their jobs because of either worsening health or their status as former OST patients being made public.

Some who have fled the peninsula described the fear and desperation among drug users still there.

Speaking at an event organised by the International HIV/AIDS Alliance in Ukraine in Kiev earlier this month, one woman, Oksana, who left the day after her OST treatment had stopped, said:  “I might have died if I had stayed in Crimea.

“I am disabled, I have had a stroke and I know very well how it feels to be left without therapy and help. Those who could not leave Crimea are in terrible conditions. Some of them are already dead, others have chosen suicide.”

There is little hope that things in Crimea will change any time in the foreseeable future. Earlier this month, Sergei Donich, deputy prime minister in the Crimean government, told local media that OST was ineffective and was being pushed by pharmaceutical firms who stood to gain from it.

Kazatchine described the situation on the peninsula as a “tragedy”, adding that it was unlikely there would not be more deaths among drug users.

He told IPS: “Evidence shows that OST reduces mortality, it prevents overdoses among drug users. I think it is inevitable that [with no more OST] more drug users will die.”