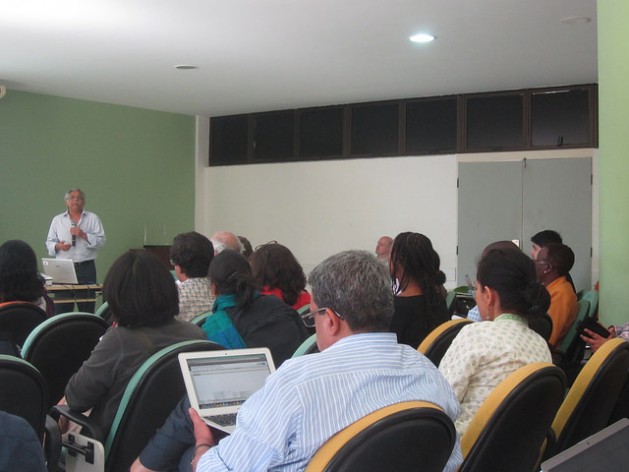 Chandrasekhar Chalapurath, an economist at Jawaharlal Nehru University in New Delhi, talks about development banks in India, at the International Seminar on the BRICS Bank. Credit: Mario Osava/IPS

FORTALEZA, Brazil, Jul 17 2014 (IPS) - The creation of BRICS’ (Brazil, Russia, India, China and South Africa) own financial institutions was “a disappointment” for activists from the five countries, meeting in this northeastern Brazilian city after the group’s leaders concluded their sixth annual summit here.

The New Development Bank (NDB) and the Contingent Reserve Arrangement (CRA), launched Tuesday Jul. 15 at the summit in the northeastern Brazilian city of Fortaleza, represent progress “from United States unilateralism to multilateralism,” said Graciela Rodriguez, of the Brazilian Network for the Integration of Peoples (REBRIP).

But “the opportunity for real reform was lost,” she complained to IPS at the International Seminar on the BRICS Bank, held in this city Wednesday and Thursday Jul. 16-17 as a forum for civil society organisations in parallel to the sixth summit.

The format announced for the NDB “does not meet our needs,” she said.

The NDB will promote “a new kind of development" only if its loans are made conditional on the adoption of low-polluting technologies and are guided by the Millennium Development Goals and their successors, the Sustainable Development Goals. -- Carlos Cosendey, international relations secretary at the Brazilian foreign ministry
The bank’s goal is to finance infrastructure and sustainable development in the BRICS and other countries of the developing South, with an initial capital investment of 50 billion dollars, to be expanded through the acquisition of additional resources.

“We want an international system that serves the majority, not just the seven most powerful countries (the Group of Seven),” that does not depend on the dollar and that has an international arbitration tribunal for financial controversies, said Oscar Ugarteche, an economics researcher at the National Autonomous University of Mexico.

“It is unacceptable that a district court judge in New York should put a country at risk,” he told IPS, referring to the June ruling of the U.S. justice system in favour of holdouts (“vulture funds”) in their dispute with Argentina, which could force another suspension of payments.

“We need international financial law,” similar to existing trade law, and an end to the dominance of the dollar in exchange transactions, which enables serious injustice against nations and persons, like embargoes on payments and income in the United States, he said.

“Existing international institutions do not work,” and the proof of this is that they have still not overcome the effects of the 2008 financial crisis, said the Mexican researcher.

Major powers like the United States and Japan have unsustainable debt and fiscal deficits, yet are not harassed by the International Monetary Fund (IMF), in contrast to the treatment meted out to less powerful nations, particularly in the developing South.

During the seminar, organised by REBRIP and Germany’s Heinrich Böll Foundation, oft-repeated demands were for civil society participation, transparency, environmental standards and consultation with the populations affected by projects financed by the NDB.

These demands have not yet been included in the NDB but may be discussed during its operational design over the next few years, while the group’s parliaments ratify its approval, said Carlos Cosendey, international relations secretary at the Brazilian foreign ministry, in a dialogue with activists. 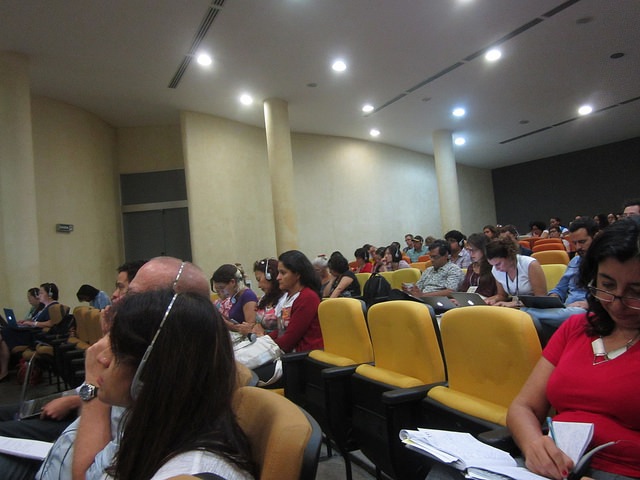 Participants at one of several panels at the International Seminar on the BRICS Bank, held Jul. 16-17 in Fortaleza, Brazil. Credit: Mario Osava/IPS

Cosendey said that a disadvantage of the multilateral bank was the need for its regulations not to be confused with infringement of national sovereignty of member states. The political, cultural, legal and ethnic differences between the five countries could pose a major obstacle to the adoption of common criteria, he said.

The NDB can be constructive “if it integrates human rights” into its principles and presents solutions for the social impacts of the projects it finances, said Nondumiso Nsibande, of ActionAid South Africa, an NGO.

“We need roads, other infrastructure and jobs, as well as education, health and housing,” but big projects tend to harm poor communities in the places where they are carried out, she told IPS. It is still not known what levels of transparency and social concern the bank will have, she said.

In the view of Chankrasekhar Chalapurath, an economist at Jawaharlal Nehru University in New Delhi, the NDB will alleviate India’s great needs for infrastructure, energy, long distance transport and ports. However, he does not expect it to make large investments in one key service for Indians: sanitation.

Having an Indian as the bank’s first president, as the five leaders have decided, will help attract more investments, but he said people’s access to water must remain a priority.

Cosenday said the NDB will promote “a new kind of development.”

But Chalapurath told IPS that this will only happen if its loans are made conditional on the adoption of low-polluting technologies and are guided by the Millennium Development Goals and their successors, the Sustainable Development Goals, as well as human rights and other best practices.

Adopting democratic processes within the bank will facilitate dialogue with social movements, parliaments and society in general, he said.

Incorporating environmental issues and gender parity is also essential, said Ugarteche and Rodriguez, who regards this as necessary in order to make progress towards “environmental justice.”

Not only roads and ports need to be built; even more important is the “social infrastructure” that includes sanitation, water, health and education, said Rodriguez, the coordinator of the REBRIP working group on International Economic Architecture.

Mobilising resistance to large projects that affect local populations in the places they are constructed will be part of the response to the probable priority placed by the NDB on financing physical infrastructure projects, she announced.

The social organisations gathered in Fortaleza, with representatives from Brazil, India, China, South Africa and other countries that are not members of the group, are preparing to coordinate actions to influence the way the bank and its policies are designed, and to monitor its operations and the actions of the BRICS group itself.

Brazilian economist Ademar Mineiro, also of REBRIP, said there was potential for national societies to influence the format and policies of the NDB, and time for them to organise and mobilise. “It is an unprecedented opportunity,” he told IPS.

Russia did not originally support the BRICS bank, preferring private funding. But Mineiro said its position changed after the United States and the European Union involved multilateral financial institutions like the World Bank in sanctions against Moscow for its annexation of Crimea, a part of Ukraine.

BRICS evolved “from the economic to the political,” with its members demanding more power in the international system. The alliance is one of the pillars of the Chinese strategy to conquer greater influence, including in the West, said Cui Shoujun, a professor at the School of International Studies of Renmin University in China.

As well as seeking natural resources from other countries, among the reasons why China has joined and supports BRICS is strengthening the legitimacy in power of the Communist Party through internal stability and prosperity, the academic said.