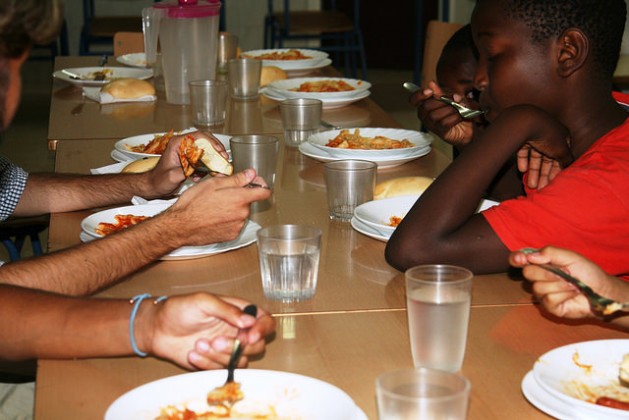 Children in the cafeteria of the Manuel Altolaguirre public school in the poor neighbourhood of La Palma-Palmilla, in the southern city of Málaga, Spain, which provides meals to the poorest students in the summertime. Credit: Inés Benítez/IPS

MALAGA, Spain, Aug 6 2014 (IPS) - It’s two in the afternoon, and María stirs tomato sauce into a huge pot of pasta. School is out for the summer in Spain, but the lunchroom in this public school in the southern city of Málaga is still open, serving meals to more than 100 children from poor families.

“My son has had to take my grandson to summer school because he doesn’t have enough money to feed him.” -- Mercedes Arroyo
“The kitchen is always operating, winter and summer,” Miguel Ángel Muñoz, the prinicipal of the Manuel Altolaguirre school, told IPS. “There are families in situations of extreme need. For many children, the only hot meals they eat are what they are served at school.”

The school is in La Palma-Palmilla, one of the poorest neighbourhoods in this city in the southern autonomous community or region of Andalusia.

A number of reports have described the dire economic situation faced by many families with children in Spain, and the resultant problems of poor quality diets and child malnutrition.

There are 2.3 million children in Spain – 27.5 percent of the total – living under the poverty line, according to a study by UNICEF, the United Nations children’s fund.

The unemployment rate in this country of 46.7 million people stands at 25.9 percent, according to the National Statistics Institute. Then there is the “working poor” who earn wages too low to cover mortgage payments or rent, utility bills and food.

“My mother sells lottery tickets and my father is at home,” Rafa told IPS just after eating pasta, salad and watermelon for lunch in the Manuel Altolaguirre school lunchroom. The eight-year-old has siblings aged four, 10 and 12.

Sitting next to him, 11-year-old Yeray said he and his brother Antonio have lunch at the school every day while his father works “carrying luggage in the airport.”

“The food is good,” said Yeray, who wants to “fix cars or be a policeman” when he grows up.

Daniel Fernández, with the local non-governmental organisation Animación Malacitana, who has been responsible for summertime activities in the school for 13 years, told IPS that “there are entire strata of society in emergency situations” and in need of help in Spain.

Since 2013 the government of Andalusia, the most populous autonomous community in Spain, has extended through the summer vacation period the aid it provides during the school year, and subsidises summer school in institutions like Manuel Altolaguirre in cities throughout the region.

In summer school, the poorest children are served breakfast, lunch and an afternoon snack at no cost, while they participate in recreational and educational activities run by social organisations.

“My son has had to take my grandson to summer school because he doesn’t have enough money to feed him,” Mercedes Arroyo, who has three children – aged 18, 24 and 28 – and three grandchildren – two seven-year-olds and a 10-year-old – told IPS.

“And many of us are in that situation,” said her husband, Enrique Sánchez, outside the “25 Mujeres” “economato social” – government shops that sell basic foodstuffs and cleaning and hygiene products at cost to poor families – in La Palma-Palmilla.

It is now common to see grandparents supporting their children and grandchildren – and even great-grandchildren – on their small pensions. Rosario Ruíz, 67, draws a disability pension of 365 euros (500 dollars) and lives with her 26-year-old unemployed granddaughter who is a single mother of two children, aged two and five.

The families of some 200,000 children in Spain can’t afford a meal based on beef, chicken or fish every two days, the NGO Educo reported on its website.

Poor nutrition in childhood can have irreversible effects on children’s health, abilities and development, experts say.

“Parents need school lunchrooms to be open in the summertime too,” said Muñoz, who stressed the vulnerability of the children who attend schools in La Palma-Palmilla.

The children mainly come from gypsy (Roma) or other immigrant families, most of them from Romania. They are served breakfast and lunch, and are given an afternoon snack in a bag to take home, year-round as part of an anti-poverty plan run by the socialist government of Andalusia, one of the regions with the highest unemployment rates in Spain.

Different NGOs in Málaga also organise summer activities for poor children. For example, Málaga Acoge runs ¡Queremos montar un circo! (We Want to Mount a Circus!) for 120 immigrant children, financed through microdonations, while Prodiversa ran a summer camp in July for 23 children between the ages of six and 11, subsidised by the Obra Social la Caixa Proinfancia and offering meals, tutoring and counseling.

Spain is the European Union country with the second highest level of child poverty, following Romania, according to a report by Caritas Europa on the social impact of the austerity policies applied in the countries hit hardest by the economic crisis, released Mar. 27.

Caritas, a Catholic social assistance organisation, put the proportion of children under 18 in Spain living on the edge of social exclusion at 29.9 percent.

And the report Child Poverty and Social Exclusion in Europe published by Save the Children in June put the proportion at 33.8 percent.

“It’s a chronicle of impoverishment foretold,” economist Juan Torres López told IPS. He said the “policies involving steep cutbacks have dismantled the social services and basic collective assets,” turning Spain into “the country with the worst inequalities in Europe.”

According to the economist, the government of right-wing Prime Minister Mariano Rajoy has adopted “inadequate, unfair and ineffective” measures to combat the economic crisis, instead of opting for “alternatives that could bring good results such as tax reforms aimed at greater equality and financing that is not set up to benefit the banks.”

Cuts in public spending began during the administration of socialist Prime Minister José Luis Rodríguez Zapatero (2004-2011). But the biggest cutbacks in social expenditure in democracy in Spain have been applied since Rajoy took office.

Teachers and members of social organisations told IPS that some students ask to fill their plates three times in the school lunchrooms. Many don’t even have hot water at home to take showers in the winter, because they live in broken homes or come from extremely poor families.

“Good thing the summer comes. Then I don’t mind taking a shower with cold water,” a boy whose family could not afford a water heater or gas cylinder every month told Fernández.