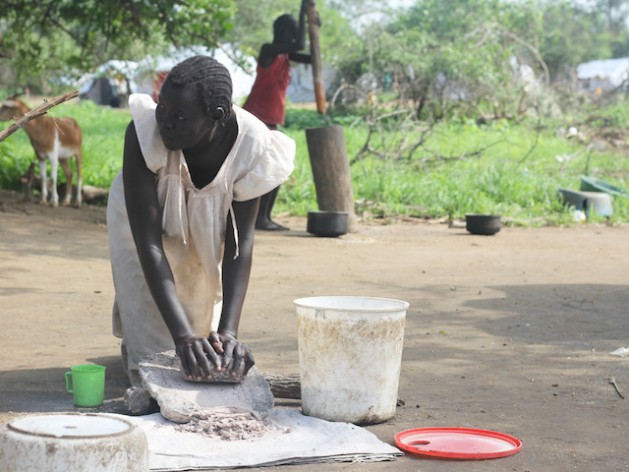 A woman living in a displacement site in Mingkaman, South Sudan, grinds grain that she received from humanitarian agencies during their monthly food distribution. More than 1.5 million people have been displaced by the fighting in South Sudan and many are now dependent on aid agencies for food, shelter and protection. Credit: Andrew Green/IPS

JUBA, South Sudan , Aug 14 2014 (IPS) - Another deadline has passed. But instead of bringing about peace, the leaders of South Sudan’s warring parties have allowed the country to continue its slide toward famine.

Sunday was the deadline for the delegations of President Salva Kiir and his former deputy turned rebel leader Riek Machar to present a final proposal for a unified transitional government that would end eight months of conflict.

Instead, the weekend brought more fighting.

Each new clash exacerbates the country’s already-desperate food security situation. The international community has warned that famine could arrive as early as December. At least 1.1 million people are facing emergency food shortages. And – until fighting actually stops – aid agencies do not have access to tens of thousands of people who need their help.

“Attacks on civilians and destruction and pillage of civilian property lie at the heart of how this war has been fought.” -- Skye Wheeler, a researcher with Human Rights Watch

There are no indications from the field that the clashes will stop any time soon. On Tuesday, during a visit of the United Nations Security Council to South Sudan, U.S. Ambassador Samantha Power shared reports they had received “of more arms being brought into this country in order to set the stage for another battle.”

Meanwhile, in early August, a local militia group operating outside the command of either of the two forces tracked down and executed six aid workers in Upper Nile state, near the country’s border with Sudan. They chose their targets based on ethnic affiliation, perpetuating the tribal divisions that are driving this conflict.

By the time the two sides finally get to work in Addis Ababa, they may be drafting a solution to a situation over which they no longer have any control.

The now eight-month conflict began as a political squabble between Kiir and Machar over who would control the ruling Sudan People’s Liberation Movement party. But it quickly stoked ethnic tensions as it moved across the eastern half of the country. Human rights violations became one of the grim hallmarks of the violence.

“Attacks on civilians and destruction and pillage of civilian property lie at the heart of how this war has been fought,” Skye Wheeler, a researcher with Human Rights Watch, said in an interview with IPS. Patients have been shot in their hospital beds and people sheltering in a mosque and at U.N. bases have been massacred. At least 10,000 people have been killed and 1.5 million more displaced.

Even as violence has become the norm across large swathes of the country, the targeted killings of aid workers and other Nuers living in Upper Nile state’s Maban County may have marked the transition to a more volatile stage in South Sudan’s conflict.

Maban, which hosts tens of thousands of Sudanese refugees, had been relatively untouched by the fighting. But that did not stop a local militia, calling itself the Mabanese Defence Force and with no obvious alliance to either side, from executing the Nuer civilians.

The U.N. Mission in South Sudan warned in a press release that Maban was now at risk of an “ongoing descent into lawlessness” – a lawlessness that, in the absence of a legitimate peace deal, could easily spread to other areas of the country as communities decide to exact their own forms of justice.

“We’ve seen how abuse has driven further violence and more abuses during reprisal attacks directed against civilians,” Wheeler said. The weekend brought reports that another armed group was on the march in Maban, this one to exact revenge for the killings earlier in August.

The consequences of the Maban murders could be further reaching.

The people living in the conflict regions – as well as tens of thousands of displaced – are almost completely dependent on the U.N. and non-governmental organisations for food, shelter and protection.

Humanitarians were already dealing with access issues amid the ongoing fighting, as well as funding shortages. The U.N. estimates aid agencies will need 1.8 billion dollars to reach 3.8 million people before the end of the year. So far they have raised just over half.

And while the situation does not yet meet the technical criteria to be declared a famine, “there is extreme suffering,” Sue Lautze, the U.N.’s Food and Agriculture Organisation country director, told IPS.

If aid workers become targets, the suffering will get much worse.

In Maban, a team from Medair, a humanitarian group currently providing emergency services in South Sudan, is responsible for operating clean water stations and running other health and hygiene services for the 60,000 people, including Sudanese refugees who live in the Yusuf Batil Camp, as well as members of the surrounding communities. Country Director Anne Reitsema said in an interview with IPS the attacks showed a “total disrespect for humanitarian actors.”

Following the attack, Medair temporarily pulled some staff members out of Maban, though leaving enough people to continue their operations. It’s too early to say when they will return, but Reitsema cautioned that the attack “makes it very hard for us to do our work.” The problem is, there is no one else to do it.

All of this – the increasing violence, the possible famine and another missed deadline – can be used as points “to shame” the two parties into an agreement that finally sticks, according to Jok Madut Jok, an analyst with the Sudd Institute, a local think tank.

It’s already happening. During her visit to Juba, Power said, “We do not see the urgency that needs to be brought to these negotiations.” And the international community has raised the threat of economic sanctions once again.

It’s a strategy that has not yet worked – the United States and European Union have already sanctioned a military leader on each side of the conflict. But neither has anything else the local and international community has tried. Which is why Jok expects more deadlines may come and go without anything being accomplished.

“The peace talks are about what each one of them hopes to walk away with from the peace talks, rather than peace, itself,” he told IPS.